After six months, active COVID-19 cases in Tamil Nadu drop below the 10,000-mark 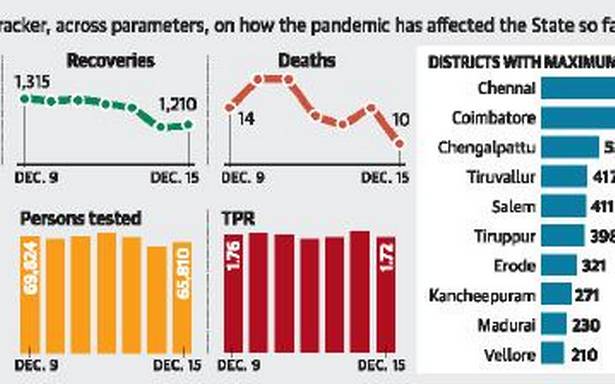 Tamil Nadu recorded 1,132 cases of COVID-19 on Tuesday, even as the number of active cases fell below 10,000 after six months.

In Chennai, 359 persons tested positive for COVID-19 and five died of the infection. Coimbatore reported 117 cases, while Tiruppur and Tiruvallur had 69 and 62 cases, respectively.

There were 59 cases in Chengalpattu. The remaining 32 districts had less than 50 cases each. Of them, 10 districts recorded new cases in single digits. They included Tenkasi (1), Perambalur (2), Ariyalur (2), Ranipet (7) and Cuddalore (9), among others.

All 10 persons who died had co-morbidities and were aged above 60.

They included a 90-year-old man from Namakkal, who had been admitted to the Erode Medical College Hospital, Perundurai, on December 9. He died on December 13 due to respiratory failure, chronic obstructive pulmonary disease, metabolic encephalopathy and acute respiratory distress syndrome.

A private laboratory — Medivision Scan and Diagnostic Research Centre Pvt Ltd, Chennai — has been approved for COVID-19 testing. As of date, there are 232 testing facilities in the State, including 67 in the government sector and 165 in the private sector.