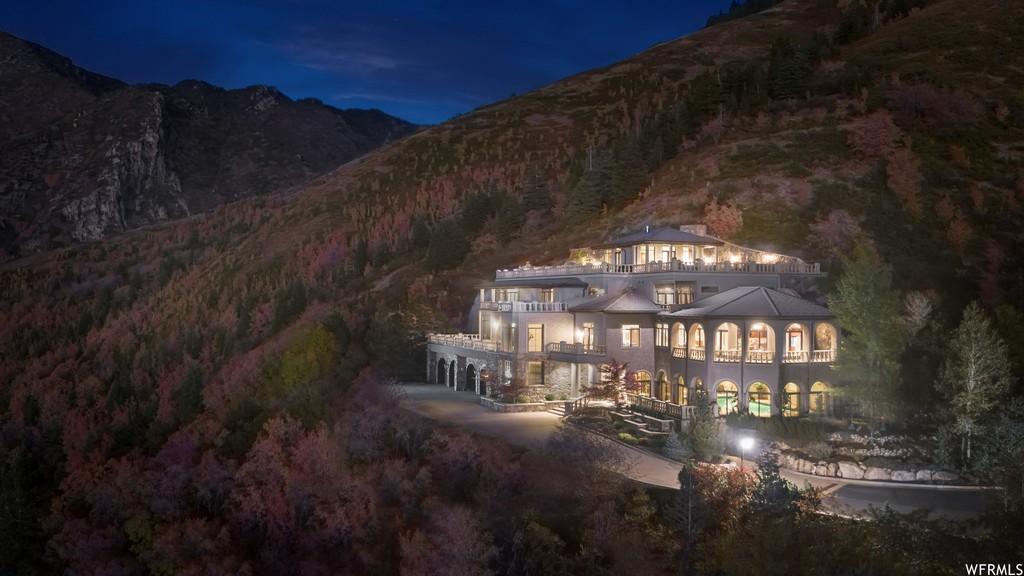 It’s one thing to own a home on top of a mountain, but how about a home carved right into the side of a hill?

That’s exactly what makes this 13,588-square-foot home in the exclusive Olympus Cove neighborhood of Salt Lake City, UT, so appealing. The mountainside mansion is now on the market for $6 million.

Known as “Monte Olimpo,” it’s the only home that has been or ever will be allowed to be built on the 9,573-foot Mount Olympus, a popular day hike for locals.

Listed with Marvin Jensen of Windermere Real Estate/Luxury Portfolio International, the residence was snapped up by the current owner in 2003, shortly after its design and construction were completed.

An architectural marvel reminiscent of Tuscany, the five-bedroom, seven-bathroom home, set on a 15-acre lot, is a true entertainer’s paradise.

The home has a total of seven outdoor terraces, and each of the bedrooms comes with its own stone-tiled balcony. One terrace hosts the hot tub.

Perks inside include a 150-bottle wine cellar (chiseled right into the granite of the mountain), a home theater, and two master suites. There’s also a wellness center that features an indoor pool, juice bar, Jacuzzi, massage area, and a sauna and steam room.

The low-maintenance landscape, with pine and aspen trees, is also a plus. The two kitchens will please a culinary enthusiast or any buyer who enjoys large-scale entertaining. And for folks who love to control their entire experience with the touch of a button, this smart home allows for easy control of sound, lighting, heating, and cooling.

In 2020, the current owner updated and refreshed all areas of the home, which spans four levels.

“It’s got more of a contemporary look, even though it has a Mediterranean vibe,” says Jensen.

Although it’s carved into the side of a mountain—and offers plenty of privacy—the home isn’t out in the boonies.

It’s about 20 minutes from Salt Lake City International Airport, and a five-minute drive from schools. However, it’s also really secluded, since it is the highest residence on the mountain.

“Views go on for miles. It’s very hard to get views and privacy,” says Jensen. “You usually have one or the other. This one has both.”

Thus far, the agent has fielded interest from 30- to 45-year-olds who desire a trophy property, yet want to be to close to the city.

“They want to be able to point to this house in the city and say, ‘That’s mine,’” he adds. “They want a wow factor.”

Jensen added that the market for a one-of-a-kind property like this has expanded in Utah in the past couple of years.

“We’re starting to see [more] money made in the tech sector, bitcoin, and real estate,” he says. “We’ve had a lot of interest locally. There’s a lot of activity in the luxury home market here in Salt Lake City.”