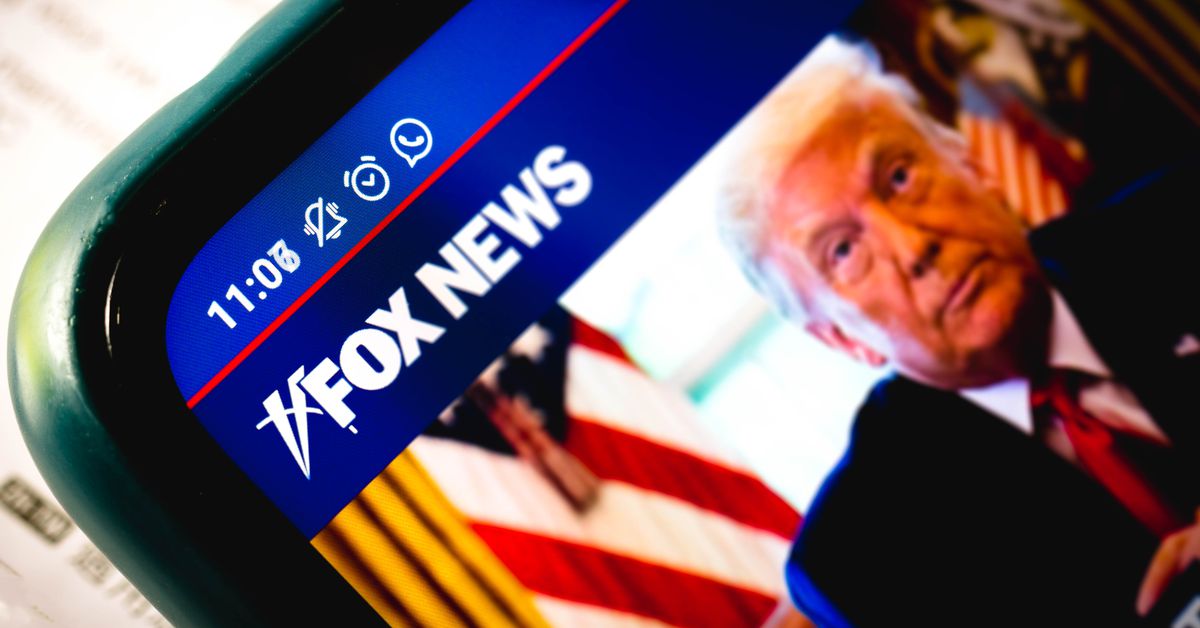 Former President Donald Trump did not succeed in overturning his election loss to Joe Biden. But he did succeed during his lame-duck period in knocking Fox News down a peg.

Over the past few months, Trump repeatedly derided Fox News while promoting upstart rivals like Newsmax and One America News Network (OAN), both of which more reliably pushed his conspiracy theories about the election being stolen. Fox News responded to this very public post-Election Day rift with Trump — and the sagging ratings that came with it — by purging its newsroom and doubling down on grievance-soaked punditry.

The early returns haven’t been great.

For the first time in 20 years, Fox News can no longer say it’s the top-rated cable news network. In fact, from Election Day through Biden’s inauguration, Fox not only didn’t finish on top — it also finished behind both CNN and MSNBC in total viewers.

From Election Day through Inauguration Day, when Democrat Joe Biden was sworn in to succeed Trump as president, CNN was the most-watched cable news network in both total viewers (1.8 million) and those 25-to-54 (501,000), the key news demographic, according to Nielsen ratings.

CNN also took over the top spot among viewers in the key demographic in prime time, where Fox features its biggest hitters – opinion hosts Tucker Carlson, Sean Hannity and Laura Ingraham – although Fox remains No. 1 overall.

Inauguration Day was particularly grim for Rupert Murdoch’s news network. Although it’s not necessarily surprising that Fox viewers weren’t eager to watch the swearing-in of a Democratic president, Fox News’s ratings were down a whopping 75 percent compared with Inauguration Day 2017, as detailed by Daily Beast contributing editor Justin Baragona (ratings for Biden’s inauguration across all news networks were actually up overall):

What a difference 4 years make.

In 2017, Fox News averaged 8.8 million viewers during its daytime inauguration coverage and 11.8 million for Trump’s oath and speech.

Yesterday, Fox pulled in 2.2 million for its daytime coverage and 2.7 million for Biden’s speech.

Amid its ratings struggles, Fox News debuted a new weekday lineup last week that cut an hour of news content and replaced it with another Hannity-style opinion show at 7 pm ET, which for now is hosted by a rotating cast of Fox personalities. But ratings for the first week of that show, hosted by Fox & Friends’s Brian Kilmeade, actually lagged behind what Martha MacCallum’s old news-centric show was doing in the same time slot.

As Baragona explained in an interview with Vox, it’s not a coincidence that Fox News’s ratings decline coincided with the disappearance of Trump’s Twitter account, which the former president used relentlessly to promote his favorite Fox opinion hosts and denigrate their competition. And now, without the backing of one of its most influential fans, the network has been left to chart its way through an uncertain future.

“We don’t know how much right-wing grievances will work, how much basically stoking outrage will work,” Baragona said. “It worked during the Obama years, and that’s the formula they’re trying to replicate right now. But we just got through with a Trump era, and now the guy who helped trumpet [and] amplify them on Twitter, he’s gone now. His Twitter account’s gone. And many of his fans are not coming back, so it just remains to be seen.”

Coming as it did toward the end of a year in which the station again finished as the most-watched cable news network, Baragona characterized Election Day as a major “inflection point” for Fox. By then, Trump had already made known his displeasure with Fox for its failure to rig polls in his favor or to only interview Republicans who supported him, though he still promoted Fox hosts who toed the line, such as Tucker Carlson and Sean Hannity. But everything changed the night Fox News infamously called Arizona for Biden.

Fox News’s Arizona call was early — competing cable news networks didn’t call the state until days later — but turned out to be accurate. Nonetheless, it threw a major wrench in Trump’s barely concealed plan to steal the election by prematurely declaring victory.

Axios’s Jonathan Swan and Zachary Basu recently explained how the plan was supposed to work and how it went off the rails once Fox News put Arizona in Biden’s column:

For weeks, Trump had been laying the groundwork to declare victory on election night — even if he lost. But the real-time results, punctuated by Fox’s shocking call, upended his plans and began his unraveling.

Trump had planned for Americans to go to bed on Nov. 3 celebrating — or resigned to — his re-election. The maps they saw on TV should be bathed in red. But at 11:20 p.m. that vision fell apart, as the nation’s leading news channel among conservatives became the first outlet to call Arizona for Joe Biden. Inside the White House, Trump’s inner circle erupted in horror.

Though it’s obviously silly to get mad at a cable news channel for accurately calling an election result, that’s exactly what Trump did. In the weeks following his defeat, he routinely blasted the network for its sagging ratings, describing its daytime quasi-news programming as “not watchable” as he promoted further-right alternatives like Newsmax and OAN.

Baragona attributes part of Fox News’s ratings slide to Trump fans blaming the network for his loss, saying a portion of its core audience “holds Fox personally responsible for Trump not being reelected.”

Fox brass seems to be somewhat sympathetic to that view. Earlier this month, two executives involved in the Arizona call — Bill Sammon, senior vice president and managing editor at Fox’s Washington bureau, and politics editor Chris Stirewalt — were forced out. Diana Falzone and Lachlan Cartwright reported for the Daily Beast that those moves were part of a broader “purge” to “get rid of real journalists.”

Politics editor Chris Stirewalt’s exit from the network coincided with the sacking of at least 16 digital editorial staffers, including senior editors. People familiar with the situation said the layoffs—a “blood bath,” as multiple Fox News insiders described it—were perpetrated by Porter Berry, the Sean Hannity crony now in charge of remaking Fox’s digital properties in the image of its right-wing opinion programming.

If the goal of these moves is to win back viewers who are now opting for Newsmax and OAN instead of Fox News, they haven’t so far worked. Twice since the election, including once earlier this month, Newsmax has bested Fox News in a key demographic during an hour of programming.

Newsmax and OAN have carved out niches as networks especially willing to spread right-wing conspiracy theories and misinformation. In the weeks leading up to the January 6 Capitol riot, for instance, former Trump national security adviser and key QAnon figure Michael Flynn went on Newsmax and floated the idea of Trump declaring martial law to overturn his election loss and didn’t receive any pushback at all.

Flynn made these comments on a show hosted by Greg Kelly, which has been Newsmax’s biggest hit. As Baragona and three others explained for the Daily Beast:

Coverage of the sort Kelly is doing has risks, however. Newsmax, OAN, and Fox News recently received letters from Smartmatic, which develops voting hardware, demanding they retract statements falsely suggesting the company’s voting machines may have helped throw the election for Biden. Demands of this sort aren’t idle threats — another voting machine company, Dominion, sued Trump-affiliated lawyer Sidney Powell for $1.3 billion over false claims she made linking the company to election fraud. Dominion went on to sue Trump lawyer Rudy Giuliani for the same amount.

After saying Twitter ran his account from Germany for two weeks and peddling more false and baseless voter fraud conspiracies about Dominion, Mike Lindell ends his interview by thanking Tucker and saying “God bless you.”

Baragona said that while the rise of Newsmax and OAN and the threat they pose is a real concern for Fox, time will tell whether the appeal of the upstart networks — as well as their programming choices — will continue to surge now that election conspiracy theories are beginning to fall out of fashion.

“The thing is, their moment was about pushing election denialism,” Baragona said. “That was their moment, by pretending that Trump was still going to be president and saying, ‘We’re gonna pretend that Biden is not gonna take office.’

“Now that you have Biden as president, there’s kinda a burst of a reality bubble there,” he added. “You can’t continue to go down the road of, ‘Well, Trump’s still the president,’ you know? Because he’s not.”

With its meal ticket out of the White House, Fox News redefines itself in opposition to Biden

Fox News spent most of the Trump years enjoying a symbiotic relationship with the president. Its hosts ran interference for him and gave his family members and administration officials unlimited access to softball interviews before a national audience, and in return Trump promoted the network with live tweets, praise, and scorn for the competition.

But with Trump out of power, Fox News quickly shifted from “all Trump, all the time” to becoming a gadfly, devoting multiple segments of programming each day to pointing out alleged liberal hypocrisy and using culture war issues to stoke grievances.

One thing is different this time around, however — Fox News is no longer the top dog.

“Fox is a third-place network at this very moment. And that’s something that they are not used to and have not been used to since they started in ’96,” he added. “From basically the end of the Clinton impeachment onward, they have been the No. 1 network, and it’s something they’re used to touting and rubbing in the face of CNN and MSNBC. Inside, there’s a lot of turmoil on that.”

Back to Top
Close Add post
X
Not-So-Hidden X-Rated Bookshelf Item Turns BBC Guest Into ‘National Hero’…WorldSharp-eyed BBC viewers got an unexpected eyeful this week when they spotted something unusual on a bookshelf in the background of an interview. As Yve…

X
Do pregnancy and COVID-19 vaccines mix? Here’s what the experts say…WorldTo vaccinate or not to vaccinate — that is the question pregnant women are asking themselves as COVID-19 shots roll out across the country.Like so man…
close