GE Stock Could Climb on the AerCap Deal 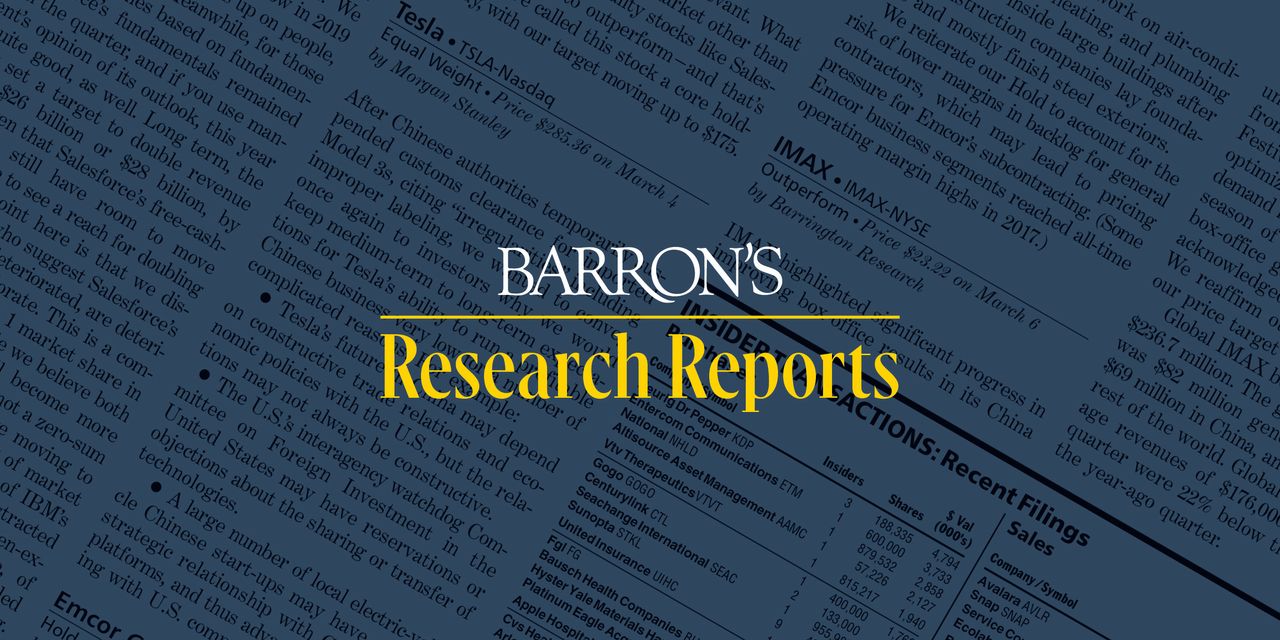 
These reports, excerpted and edited by Barron’s, were issued recently by investment and research firms. The reports are a sampling of analysts’ thinking; they should not be considered the views or recommendations of Barron’s. Some of the reports’ issuers have provided, or hope to provide, investment-banking or other services to the companies being analyzed.

GE hosted its 2021 Outlook call on March 10. Guidance was reaffirmed, and the segment level assumptions look reasonable/well supported to us. The stated longer-term goals indicate that the multiyear turnaround at GE is right on track. The company also announced an innovative combination of GE Capital Aviation Services with

where GE will receive $30 billion in proceeds while retaining 46% ownership. This structure will enable GE to participate in the expected rebound in commercial aero finance, with options for a staged exit. We attribute the selling on March 10 mostly to some profit-taking after GE’s rally. Notably, General Electric bonds traded 10 to 12 basis points [each equal to 1/100th of a percentage point] tighter on March 10, indicating that the fixed-income market liked the news. We are raising our 2022 earnings estimate by five cents, to 50 cents a share, and our stock-price target by $2, to $15.

We are revising our estimates to reflect losses from Winter Storm Uri. Catastrophe modeling firms estimate insured industry losses from the storm at $10 billion to $18 billion. While the company has exposure, it has substantial catastrophe reinsurance, with an estimated retention around $150 million. The company incurred catastrophe losses of $137 million in its commercial segment and $38 million in its personal segment from Hurricane Harvey in third-quarter 2017.

We are lowering our estimates to reflect our guess of first-quarter catastrophe losses of about $167 million, or about 40 cents a share. The Hartford has a history of outperforming its peers during hard markets in commercial lines, posting an above-peer average return on equity 73% of the time. Its stock trades at a considerable discount to its peers. Our price target for the shares is $60.

Yesterday, ABM [which provides commercial cleaning and disinfecting services] reported fiscal first-quarter 2021 revenue of $1.49 billion, above our $1.44 billion forecast and the $1.48 billion consensus. Operating earnings were $1.01 a share, up 169% year over year, due to demand for higher-margin intense-cleaning services not included in normal janitorial contracts.

T. Rowe Price continues to be well positioned to distinguish itself from its peer group in investment inflows, assets-under-management growth, profitability, and financial strength. We also like its prospects for inflow improvement in 2021, as T. Rowe moves beyond the 2020 outflows tied to the Cares Act, and investors allocate more money to equity funds. Larger equity allocations indeed are happening, and data from Morningstar show that net inflows into equity assets (both U.S. mutual funds and exchange-traded funds) in February as perhaps the highest on record.

T. Rowe Price is well positioned, given its strong investment performance and relatively heavy weighting in equities. One risk is the potential for growth stocks to underperform, as the company tends to be overweight growth, relative to value. However, T. Rowe’s equity assets-under-management growth of 2.6% last month (in line with the general equity market) appears favorable, given that growth underperformed value by [6%] in February. Target price: $200.

Verizon hosted an investor day on Wednesday to discuss its strategy now that the federal C-band spectrum auction quiet period has ended. The company reiterated that its capital-allocation priorities remain unchanged. In order, they include investment in its business, paying and growing the dividend, deleveraging, and considering share repurchases “at a later date.” Verizon will spend $52.9 billion in the C-band auction, including clearing costs. We see two key read-throughs: First, Verizon’s boosting capital expenditure and committing to a maximum speed deployment [for the new spectrum] is good for the [wireless] tower sector. Second, the company expects to see rising volume growth in 2021’s second half.

Our stock-price objective of $64 is based on a 0.8 times relative price/earnings ratio to the

. Verizon’s relative P/E spread versus the S&P 500 has narrowed during periods of political and economic uncertainty. We believe the current macroeconomic climate supports our relative multiple target.

To be considered for this section, material should be sent to [email protected]