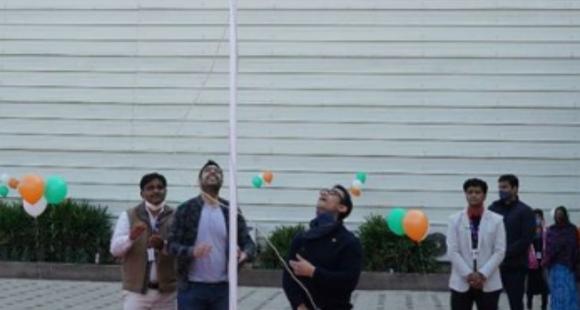 Aamir Khan recently took to his social media handles to wish his fan base on the occasion of 72nd Republic Day. Check out his post below.

Republic Day 2021: Aamir Khan shares a PHOTO of unfurling the National Flag as he sends his greeting to fans

Today on the occasion of 72nd Republic Day, people all over India are channeling their inner patriots. While some are enjoying the parade at home, others are busy wishing their near and dear ones. As India is drenched in the patriotic spirit, our Bollywood celebrities too are celebrating the day with great fervour. Stars including Anil Kapoor and Anupam Kher among others have marked the occasion by unfurling the National Flag. And, joining them is perfectionist Aamir Khan.

The Dangal star took to his Instagram handle and shared a photo wherein he can be seen unfurling National Flag as he extends his wishes. Alongside the photo, he wrote, “Ganatantra Divas ki hum sab ko dher saari shubh kaamnayein.” In the photo, the actor can be seen wearing a black sweatshirt with trousers. Aamir is seen looking up at the flag as he takes the pride in unfurling it. Notably, his fans are also wishing him as they have flooded his comments section with their greetings. While one of the users said, “Happy republic day,” another commented, “Am Big fan sir.”

Talking about Aamir Khan’s work front, the actor will next be seen in Advait Chandan’s comedy-drama Laal Singh Chaddha with Kareena Kapoor Khan.

Back to Top
Close Add post
X
Vanessa Bryant Reportedly ‘Extremely Thankful’ For Her Support System On The 1-Year-Annyversary Of K…GossipsAfter losing her husband and one of her daughters, Vanessa Bryant has obviously struggled with a lot of grief but thankfully, she’s had an amazing sup…

Republic Day 2021: Aamir Khan shares a PHOTO of unfurling the National Flag as he sends his greeting to fans