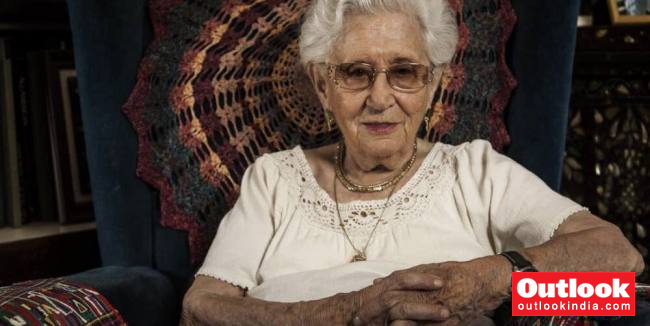 Ruth Dayan, the Israeli fashion designer and peace activist who was married to one of the country’s most revered generals, has died at the age of 103, Israeli media reported Friday.

Dayan founded the Maskit fashion house in 1954, whose designs were inspired by the cultural heritage of Jewish immigrants as well as Israel’s Arab community. She was also an active proponent of peace with the Palestinians and supported charitable causes.

The company employed new immigrants and eventually grew to be a major exporter. It has collaborated with Christian Dior, Yves Saint Laurent, and Givenchy, and boasts that one of its coats was worn by Audrey Hepburn.

Ruth was the first wife of Moshe Dayan, the one-eyed commander who led forces during Israel’s 1948 war of independence and was defense minister during the 1967 war, when it rapidly defeated its Arab neighbors. They were married from 1935 until their divorce in 1971 and had three children together.

Israel’s largely ceremonial president, Reuven Rivlin, mourned Dayan’s passing. She was “an outstanding woman and a role model for entrepreneurs, who had boundless love for this place and its people, whoever they may be,” he said in a statement.

Dayan maintained a 40-year friendship with Raymonda Tawil, a Palestinian journalist and the mother-in-law of the iconic Palestinian leader Yasser Arafat. Their relationship is the subject of a 2015 book by the historian Anthony David.

She was also a member of the public council of B’Tselem, an Israeli group that documents human rights violations in the territories Israel seized in 1967.

“She determinately opposed the occupation and even against a wide consensus and overwhelming silence bravely made her voice heard,” B’Tselem tweeted. “May her memory be a blessing.”

Dayan was born in 1917 in the coastal city of Haifa, when what is now Israel was part of the crumbling Ottoman Empire. She is survived by her daughter, the author and former parliament member Yael Dayan, and grandchildren. She outlived her other two children, actor and director Assi Dayan, who died in 2014, and sculptor Udi Dayan, who died in 2017.