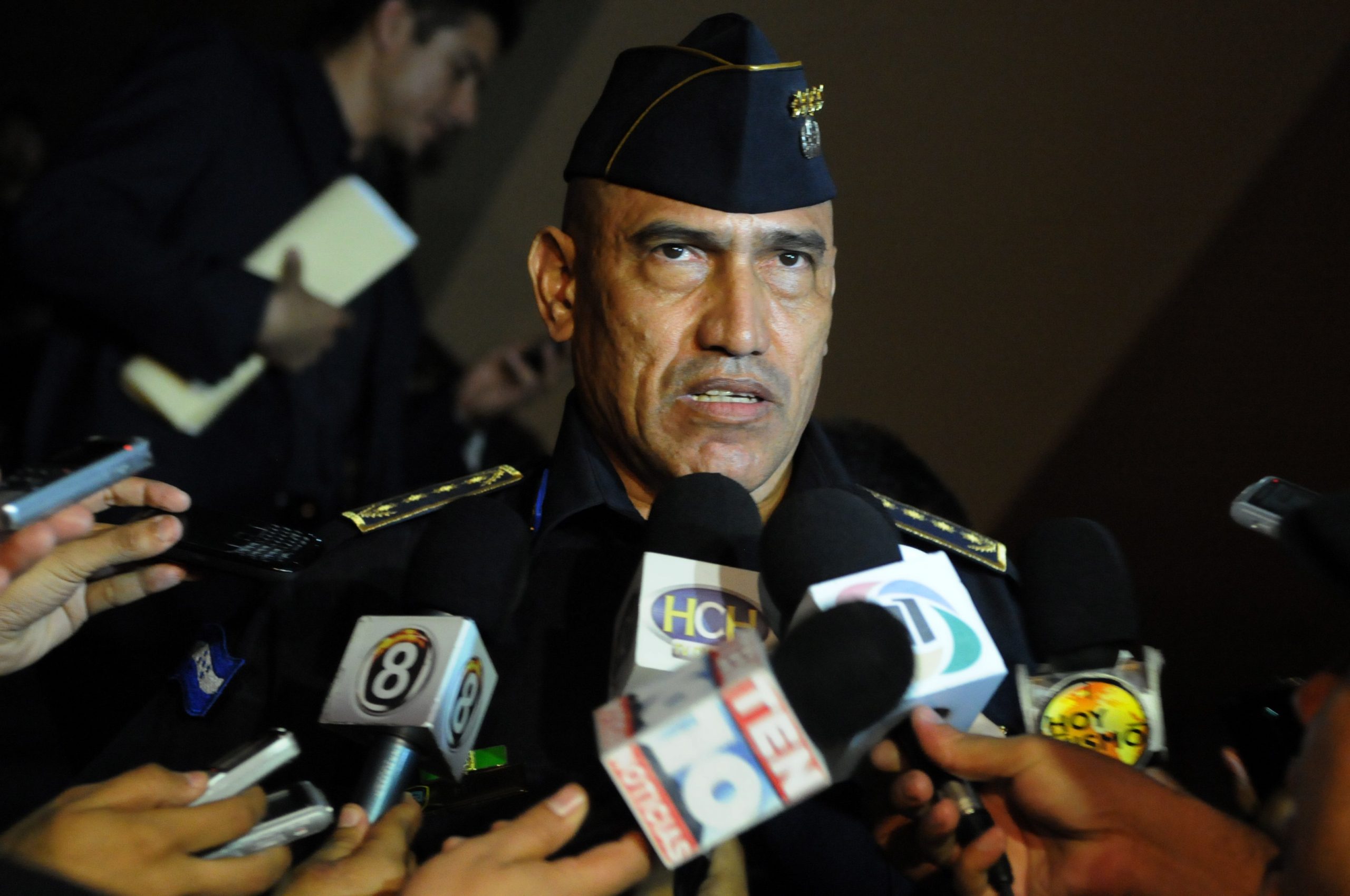 Then National Police Chief Juan Carlos Bonilla, answered questions from the press in Tegucigalpa, Honduras on May 24, 2012. Photo: ORLANDO SIERRA/AFP/GettyImages.

The U.S. has requested the extradition of a former police chief of Honduras who prosecutors say killed to protect a cocaine conspiracy for the president and his brother, according to local media reports in the Central American nation.

Juan Carlos Bonilla Valladares, known as “El Tigre,” or the Tiger, due to his fierce appearance and allegedly ruthless approach to policing, was charged with drug trafficking and related weapons offences in April 2020, but the extradition request was only made May 13.

Bonilla has been lying low in Honduras ever since the charges were announced last year, and is not in government custody.

“[Bonilla] is a very pivotal figure, and if he was extradited to the United States and decided to cooperate, it would be the final nail in the coffin of Hernández,” said Mike Vigil, a former chief of international operations for the Drug Enforcement Administration.

According to the complaint filed by the Southern District of New York against Bonilla, Hernández and his brother entrusted Bonilla “with special assignments, including murder.”

Bonilla was a controversial figure throughout his police career. In the early 2000’s, as the Honduran government took an iron fist approach against a growing gang problem, he was accused of taking part in death squads that murdered suspected members of problematic crime gangs. His lethal squad of killers was allegedly called the “Los Magnificos,” which is the Spanish title for TV series “The A-Team,” according to InSight Crime, a think tank dedicated to organized crime in the Americas.

He was later a regional police chief in western Honduras along the border with Guatemala – one of the most important points on the drug trafficking route north, where cocaine moves across land on its way to Mexico and the United States. It was during that time that prosecutors allege Bonilla murdered a rival drug trafficker who a witness said was blocking a route used by Tony Hernández.

In May 2012, Bonilla was appointed national police chief. At the time, Honduras was one of the most violent countries in the world and more than 80 percent of the cocaine that reached the U.S was estimated to pass through it.

Bonilla often cites his time as national police chief as evidence of his innocence, in particular his collaboration with the DEA. During his tenure, the U.S. and Honduras signed an agreement to create a special police unit to combat drug trafficking that has played a crucial role in building cases against suspected drug traffickers in the years since.

“The DEA knows who Juan Carlos Bonilla is,” said Bonilla, protesting his innocence after he was accused of murdering a rival drug trafficker of Tony Hernández by U.S. prosecutors in 2019.

But Bonilla was fired in 2013, largely due to pressure from the U.S. over the allegations that he participated in extrajudicial killings.

The extradition request of Bonilla is yet another clear challenge to Hernández. U.S. prosecutors have complained that Honduras has been unwilling to capture other suspected drug traffickers in recent years who could become key witnesses against the president, who enjoys certain immunity until he leaves office in January 2022.

Major drug trafficking organizations, including the Cachiros and Valle cartels, were dismantled in the last decade in large part due to the determination of the United States. Many of those former drug bosses have incriminated both of the Hernández brothers via testimony in U.S courts.

Over the past year, Bonilla has appeared at least twice on a local news program in Honduras, apparently unconcerned about a potential capture.

If captured and convicted on all charges, the 61-year-old Bonilla faces a minimum of 40 years in prison.

“The extradition request of El Tigre is significant, but that’s only if Honduras honors that, which I doubt,” said Vigil. “The message is, we’re coming after all of you.”

ORIGINAL REPORTING ON EVERYTHING THAT MATTERS IN YOUR INBOX.

By signing up to the VICE newsletter you agree to receive electronic communications from VICE that may sometimes include advertisements or sponsored content.