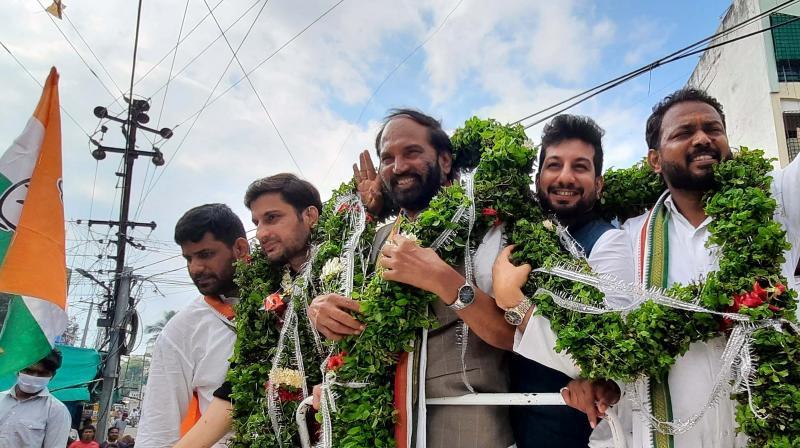 On the last day of the campaign for the elections to the Greater Hyderabad Municipal Corporation (GHMC), in which 74.67 lakh voters will decide the fate of 1,122 candidates, president of the Telangana Pradesh Congress Committee (TPCC) Uttam Kumar Reddy is neither stoic nor despondent as he gears up for the final day of campaign.

In a cheerful mood, he said that if Hyderabadis look around their city, they will find that the most game-changing development of the metropolis look place under Congress regimes — from building the international airport, the Outer Ring Road to the incubation of the Hyderabad Metro Rail project, to the setting up of the IIT, to some of the great public sector enterprises to the P.V. Narasimha Rao flyover to supporting the poor with schemes like free houses to Aarogyashri.

In an exclusive interview, he reveals why Congress is the only party that can simultaneously provide great economic growth and development and a harmonious social fabric that includes everyone irrespective of religion, caste, gender, region, class or any other criteria.

In the GHMC election campaign, the Congress has been found missing. The entire debate is about BJP versus MIM and TRS.

Absolutely true. Another thing completely missing in the campaign are issues relevant to the people of the city — about infrastructure, development, and welfare of the poor. People have noted it — when Congress is missing, development is missing. They are synonymous.

Why should people vote for the Congress? Why does it feel like people are not too enthused by your manifesto?

Bharat Biotech to which Prime Minister Narendra Modi made a visit in search of a Covid vaccine was started under which state government’s rule? Contrast this with the TRS. We had approved the Metro Rail till the Old City. Who stopped it? The K. Chandrashekar Rao government. Why? Did they ever explain to people there why such injustice was done to the city?

We sanctioned the ITIR project, which envisaged an investment of over `2.5 lakh crore and creation of over 50 lakh direct and indirect jobs. Who stopped it? The BJP. What greater proof is needed that the Congress ensures development whereas the BJP and TRS obstruct it?

People should vote for Congress because we are the alternative — to the corruption, lies, autocracy and family domination of the TRS on one hand, and the communal divide and rule policy of the BJP and MIM.

But, across the city, the palpable buzz is the BJP has occupied the slot of principal opposition to challenge the TRS and MIM, while the Congress seems to have failed in taking its message to the people.

We are as an opposition party fighting odds to take the message to people, despite having the most positive agenda. It is because when it comes to financial resources, we can’t match the money power of the BJP, TRS or MIM. Secondly, another reason is that the media does not highlight us because we are not going to stoop to the level of other parties that are trying to create communal hatred and divide the people, and deflect from real issues. We don’t abuse, so we don’t make headlines.

People seem to be responding well, especially to the BJP and MIM.

Please don’t confuse a few unemployed followers of these hate spewing leaders with the people of the city at large. Unlike Amit Shah, Yogi Aditynath or Bandi Sanjay or KCR or KTR, I was born in Hyderabad. We have a rich history and culture, a thread of bonding. We never looked at our friends and neighbours as Hindu or Muslim or Sikh or Christian. We respect everyone. We have welcomed and made the city safe for people from everywhere — our brothers and sisters of Andhra to different states. People will reject hate. Besides, both the BJP and MIM are playing in tandem.

So you think the real fight is between TRS and BJP?

The friendship of BJP and TRS is also very strong. Dilli mein dosti, galli mein kusti (friends in Delhi, feud on local streets). TRS supports demonetisation, GST, abrogation of Article 370, removal of triple talaq. When Modi visits Telangana, CM KCR says “Modi ji, I only want your love… don’t give us funds.” All three of them are partners in this anti-people, anti-Dalit, anti-farmer ecosystem.

How does the Congress wish to respond to what you call ‘campaign of hatred’?

Bandi Sanjay says he will conduct a surgical strike. As the only leader in this entire campaign who has worked for the Indian Air Force, flown enough sorties and missions along both the Pakistani and Chinese border, and who nearly got killed twice on duty, let me tell you this is not true love for India. No true Indian will try to talk like this. Does the BJP need to have a mayor after having a Central government to remove illegal immigrants? Is changing the name of Hyderabad to Bhagyanagar the number priority?

One party wants to demolish the samadhi of great late leaders like N.T. Rama Rao and P.V. Narasimha Rao. Another party demolished the Secretariat and blocks of several heritage buildings. All three of them — BJP, MIM and TRS — have used the most undemocratic, filthy and unacceptable language and rhetoric. People should reject them just for it. Congress will continue to talk of its vision of an inclusive India and inclusive Hyderabad in which everyone has a place.

How do you see the BJP deploying top leaders for a municipal campaign?

I wish home minister Amit Shah had not followed the example of KCR in not coming to meet people during the floods in which over 100 people died but finding the time during elections. It shows they consider power more important than the people. Anyone can come and campaign. But it would be nice if they care to understand the problems of people.

Amit Shah and other BJP leaders have said that they will form the next state government and that the downfall of the TRS regime has started?

It is rare for me to agree with even half a sentence of what Amit Shah might say. In this case, he is half right — the end of the Kalvakuntla regime has started. The party that fought and gave Telangana state will form its first truly people’s government. And the revival of Congress will start with the GHMC polls.