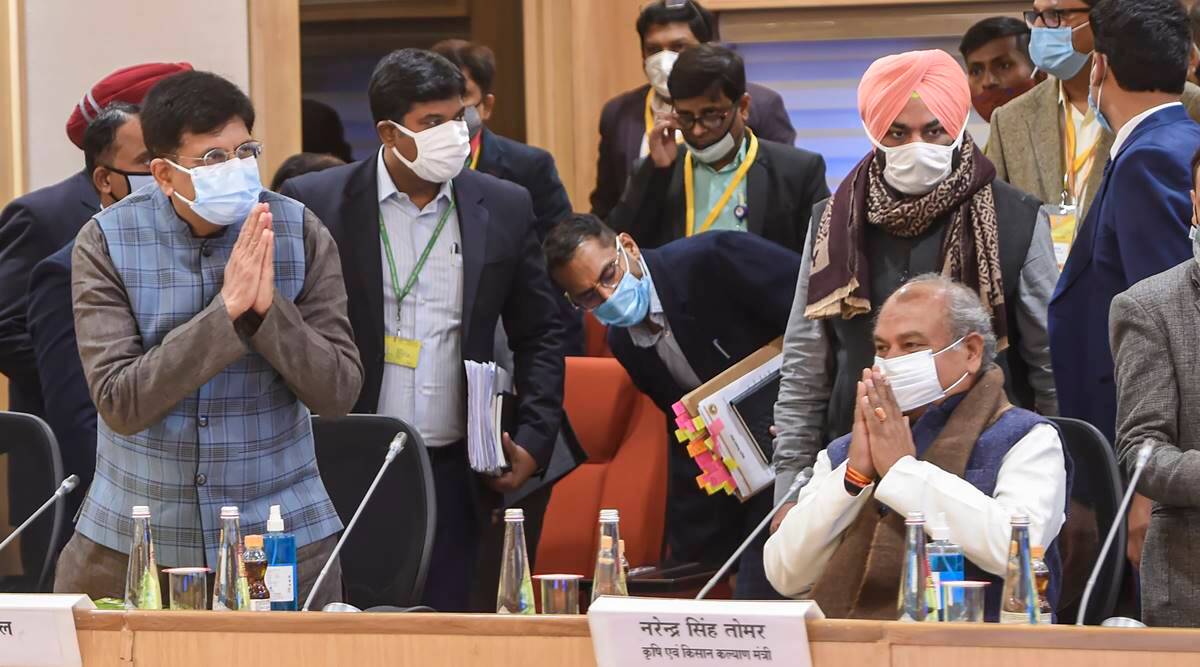 In first signs towards a resolution for the protesting farmers’ concerns, the Centre and farmer representatives reached a consensus Wednesday on two issues—the rise in power tariff and penalties for stubble burning. However, the meeting, which lasted for over five hours, failed to break the deadlock over the main contentious issues of the repeal of three agriculture legislations and a legal guarantee for minimum support price (MSP).

This was the sixth round of talks between the representatives of over 40 farmer organisations and the central government after a three-week hiatus. After the talks, Union Agriculture Minister Narendra Singh Tomar, who was accompanied by Food and Railways Minister Piyush Goyal and Minister of State for Commerce Som Parkash, said the two sides reached an agreement on two issues.

Discussing the two issues, Tomar said, “The first issue was an ordinance related to the environment. Unions were apprehensive about farmers being included along with Parali (stubble) ones. Both sides agreed to farmers’ exclusion.”

“Farmers feel that if reform is introduced in the Electricity Act, they’ll suffer loss. Unions wanted the electricity subsidy given to farmers by states for irrigation should continue. The consensus was reached on this issue also,” he added.

The government will meet the farmer leaders next on January 4, Tomar said, adding that discussions on the three farm laws and MSP will continue in the next round of talks. He also said that the talks were held in a cordial atmosphere and he requested the farmer leaders to send home the elderly, women and children given the chilly winter season.

The minister said the union leaders kept insisting on the repeal of the three farm laws, but the government side tried to explain them the benefits of the Acts and sought to know specific problems faced by the farmers. He also maintained his stand on the MSP support, saying that the government has already said that it is ready to give a written assurance.

After the meeting, farmer Union leader Kalwant Singh Sandhu said Wednesday’s talks mostly focussed on electricity and stubble burning, while the next meeting on January 4 would focus on the MSP guarantee and the three farm laws.

Ahead of the meeting, Union minister Som Prakash had said, “Today’s meeting with farmers will be decisive. We want them to celebrate New Year at their homes, with their family and we are going into the meeting with an open heart and mind. The government will try to resolve the issue so that people can go back to their homes.”

Some union leaders, however, said that farmers in some parts of the country are being forced to sell crops including paddy below the MSP as market rates have fallen and asserted that the agitation will continue till the government agrees to their demands.

In its letter on Tuesday, the Samyukt Kisan Morcha, the umbrella organisation which represents the farmer unions, said the modalities for repealing the three contentious laws and a legal guarantee on minimum support price (MSP) must be part of the agenda. The Morcha further said the agenda should also include amendments to be made and notified in the Commission for the Air Quality Management in National Capital Region and Adjoining Areas Ordinance, 2020 to exclude farmers from its penal provisions.

Thousands of farmers, mainly from Punjab and Haryana, are protesting at various borders of the national capital for more than a month against these three new laws. While the government has presented these laws as major agriculture reforms aimed at helping farmers and increasing their income, the protesting unions fear that the new legislations have left them at the mercy of big corporates by weakening the MSP and mandi systems.