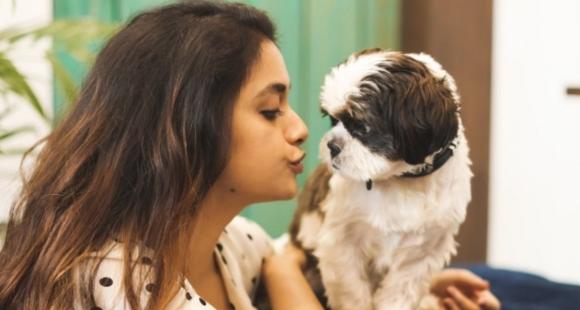 National award winning actress Keerthy Suresh took to her Twitter space and shared a photo with a furry friend, while giving us cues to ace a casual outfit.

Keerthy Suresh aces a polka dotted dress as she shares a PAWFECT photo with her furry friend Nike; Take a look

National award-winning actress Keerthy Suresh has been giving us fashion cues with her photos on social media and when she is spotted during her outing. In her latest photo, the Mahanati actress has aced a polka dot casual dress and it will give us a lesson or two, on how to ace a casual dress. With this photo, she has proved yet again, that polka dot is never out of trends. In the photo, the Ms India actress can be seen pouting at her furry friend while posing for the photo.

Sharing the photo, Keerthy stated that the photo was taken at her home. She wrote, “#HomeShoot #ShootDiaries #GoingCasualWithKeerthy”. Well, it goes without saying that Keerthy’s lastest photo has come as a huge visual treat to her fans. On the work front, Keerthy Suresh has a lot of films in her pipeline including Sarkaru Vaari Paata, Good Luck Sakhi and Annaatthe. Recently, she revealed that she was shooting for Sarkaru Vaari Patta with Mahesh Babu in Dubai.

The social drama is directed by Parasuram. On the other hand, Annaatthe is directed by Siruthai Siva, and it has Rajinikanth as the lead actor. The film also stars Nayanthara, Khushbu Sundar and Meena as leading ladies. The film’s shooting process was brought to a halt after four crew members tested positive for COVID 19. As far as Good Luck Sakhi is concerned, it is directed by critically acclaimed filmmaker Nagesh Kukunoor, and it is a rom-com, which is expected to be released soon.