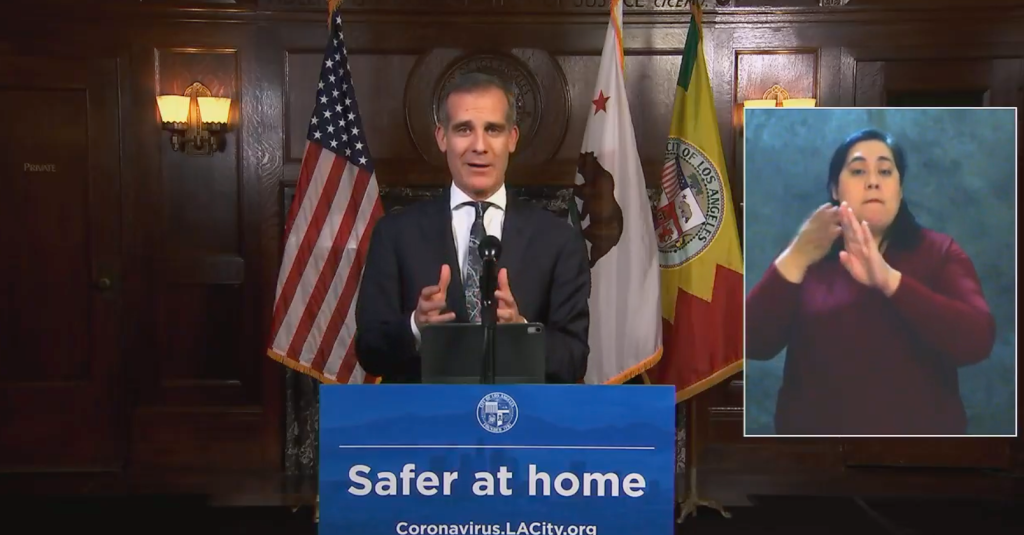 “As of today, 1 in 3 people in Los Angeles County have been infected with the virus,” said Mayor Eric Garcetti on Thursday.

The county estimates that one-third of the county’s 10 million residents have been infected with the virus at some point since the pandemic began. That equates to more than triple the number of infections that have been confirmed through testing in the county thus far.

Given that, said the mayor, local officials were watching any spike in case numbers closely.

“The county Supervisors are…trying to figure out whether there should be further closures,” said Garcetti. “I think it’s the obvious categories: Whether schools stay open or not, indoor gyms, public youth leagues.”

Likewise, said Garcetti, “If things continue to come down a little bit or come down even more quickly, maybe more closures aren’t necessary. But the moment it goes up like we saw in December at an any pace like that, absolutely. That is something we cannot sustain and most importantly our hospitals cannot and we would move into crisis mode there.

Speaking of which, another 17,323 COVID-19 cases were confirmed in the county Thursday. That’s an 18% increase in 24 hours, raising the overall number of lives lost to the virus to 975,299 and pushing the county closer to the 1 million milestone.

The death toll from COVID-19 continued a relentless climb in L.A. County, with about 1,700 fatalities from the virus confirmed over the past week alone. The past three days alone have seen close to 900 deaths in the region.

The county Department of Public Health announced another 287 deaths from the virus Thursday, lifting the overall number of fatalities during the pandemic to 13,234. Health officials noted earlier that about 170 people die in the county each day from all other causes combined.

Since last Thursday, the county has reported 1,689 new deaths — equating to an average of one death every six minutes.

Infections and deaths have been soaring in the county since November, fueled by public gatherings held in violation of health restrictions, workplace outbreaks and Thanksgiving holiday get-togethers. The effect of Christmas and New Year’s gatherings are beginning to be seen in infection numbers, with those cases expected to soon translate to more hospitalizations.

In the meantime, however, the number of people hospitalized in the county due to Covid has actually been decreasing.

State officials on Thursday reported a total of 7,715 people hospitalized in the county due to Covid-19, down from 7,906 on Wednesday and below the 8,000-plus patients reported most of last week. The number of patients in intensive-care unit beds also dropped, but not nearly as dramatically. The state reported 1,677 ICU patients being treated for COVID in the county Thursday, compared to 1,699 on Wednesday. The county has a total of about 2,500 licensed ICU beds.

The county Department of Health Services on Thursday reported a total of 570 available non-ICU hospital beds, and just 42 available adult ICU beds. Last week, on average, 80% of ICU patients in the county were being treated for Covid-19, along with 54% of non-ICU patients.

County Health Services Director Dr. Christina Ghaly on Wednesday urged people not to be fooled into complacency by the recent stabilization of hospital numbers.

“While the numbers have plateaued at this number just shy of 8000, they have leveled at a rate that is really not sustainable,” Ghaly said.

“This high plateau does not leave enough open beds to care for patients without COVID. And it does not still allow us to be prepared for an additional onslaught of patients that may present over the next couple of weeks in a potential post-holiday surge.”

Ghaly said the county’s hospitals have not yet begun to see the results of gatherings and virus transmission that likely occurred over the Christmas and New Year holidays.

“Even if the slight decline continues, we are nowhere near being in the clear in the L.A. County hospital system,” she said. “Hospitals cannot sustain the high level of beds that are occupied with COVID patients.”

She added, “For there to be any meaningful relief for health care providers, we need a swift and significant decline in hospitalizations for a period of one to two months. Please do not let this current number of daily hospitalizations feel normal to you just because it’s plateaued.”

Public Health Director Barbara Ferrer warned that the county could also soon see spiking infection numbers thanks to a highly contagious new variant of the virus first discovered in the United Kingdom.

That variant has not been officially identified yet in Los Angeles County. But Public Health Director Barbara Ferrer has warned the variant is likely already here and simply hasn’t been detected in the relatively limited number of tests conducted in search of the new strain.

“According to the latest available science, the UK variant doesn’t make people sicker, but it is more transmissible, meaning it can spread more easily,” Ferrer said Wednesday. “Current projections by the experts predict that if left unchecked, this variant could dominate locally by March.”

With the variant’s ability to rapidly pass from person to person, it could quickly drive up infection numbers, inevitably leading to more hospitalizations and ultimately more deaths, Ferrer said. She said people need to continue taking all necessary precautions, while not ruling out the need for
stricter regulations to control the spread.

“We should be prepared to do more if cases remain high,” she said.

“The work ahead requires us to take every action necessary to reduce transmission.”

According to estimates released Wednesday by the county Department of Health Services, the COVID-19 transmission rate — the number of people a Covid patient infects with the virus — is hovering at about 0.97. Any time the rate is at 1 or higher, cases are anticipated to increase.

The county’s modeling also estimates that roughly 1 in every 115 residents who are not hospitalized or in quarantine are infected with the virus and capable of spreading it to others.

Ferrer noted that average daily new cases in the county have risen by 1,092% since November, average daily deaths are up 1,133% and hospitalizations are up 875%.