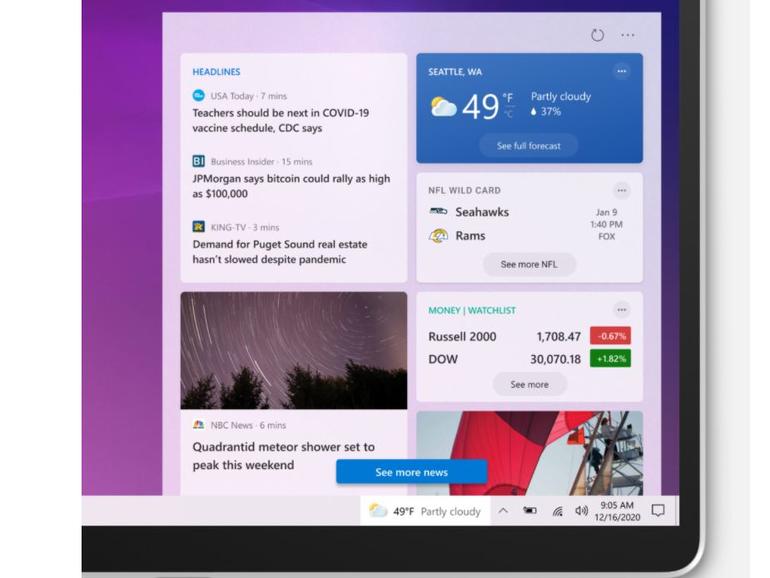 Microsoft is starting to test a potential new Windows 10 feature called “News and Interests” in the Windows 10 Insider Dev Channel. The feed of news, weather and other information can be personalized and, more importantly, completely turned off for those not interested in having this kind of widget accessible directly from their taskbars.

Today’s Windows 10 Dev Channel build, No. 21286, is from the RS_Prerelease ring. That means this feature is on the list of things that might (or might not) show up in some future Windows 10 feature release. I’d guess it’ll be in Windows 10 21H2, due this fall, if it makes it past testing.

The news and interests feature is similar to the news feed that Microsoft also highlights as part of its Launcher app and Bing search pages. Microsoft’s decision to make it a taskbar add-on is attributable to the “stay in your flow” concept which the Surface and Windows teams have been championing as of late. Why take the time to load yet another app instead of just peeking at one from your taskbar?

Microsoft says the News and Interests feed will be an ad-free experience, which it will evolve over time based on customer feedback.

To turn off the News and Interest feed in the Taskbar, users can right click on the task bar, Microsoft officials said.

The news and interests feature is currently only available to Windows Insiders in United States, Canada, Great Britain, Australia, and India. The feature requires the new Chromium-based Microsoft Edge browser to be installed. Officials noted that Microsoft is testing “different variations of this experience so some Insiders may see a different experience than others.”

There are a couple of other new features in Build 21286. Users can now create and manage Storage Spaces from within the Settings app — including creating storage pools and spaces; adding and removing disks and optimizing pools. There’s also an option for running any specified Linux command on startup of a Windows Subsystem for Linux (WSL) distribution. And there are a couple of tweaks to the “Set time zone automatically setting.

For more on these features, along with a list of the fixes and known issues in Build 21286, check out Microsoft’s blog post.