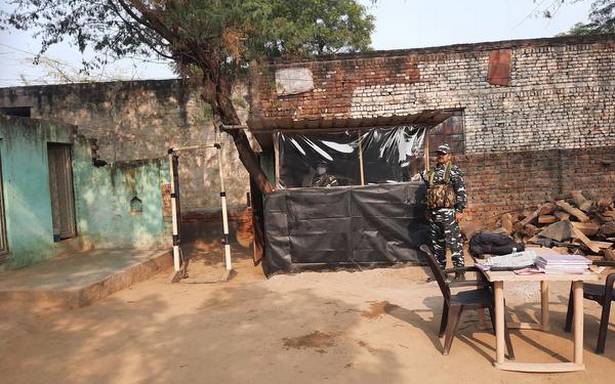 The CBI investigation is not the only ray of hope for the traumatised family. Despite the tense and polarised atmosphere in the village, the neighbouring Brahmin family has agreed to share crop on their fields.

A joint front of farmer unions, on Saturday accepted the Union government’s offer for talks, putting forth a four-point agenda that includes modalities to be adopted for the revocation of the three farm laws and mechanism for legal guarantee for minimum support price (MSP).

The row of tractors behind the stage on the Delhi-Meerut expressway has suddenly become longer in the last two days. Among those who have joined in the last couple of days are peasants from Punjab.

Since its launch in August 2019, the Centre’s ambitious flagship scheme Jal Jeevan Mission (JJM) has achieved 32.3% coverage of tap connections in rural India, emerging as a key scheme in the Narendra Modi administration’s second term.

The NTF also recommended the setting up of a ‘Genomic Surveillance Consortium’ (INSACOG) to map the various strains circulating in India and said that it is critical to conduct enhanced genomic surveillance for SARS-CoV-2 specially in incoming passengers from the U.K.

The Prime Minister described the polls as steps towards “strengthening the roots of democracy” in J&K. He said “the only reason” his party pulled out of the PDP-BJP alliance in 2018 was “that we wanted panchayat elections to be held in J&K”.

The Bill is similar to the Prohibition of Unlawful Conversion of Religion Ordinance, 2020, notified by the BJP government in Uttar Pradesh last month, which too provides for a maximum punishment of 10 years’ imprisonment for “fraudulent conversions”, even for the sake of marriage.

Most importantly, the deal as it stands ensures that Britain can continue to trade in goods with the world’s biggest trading bloc without tariffs or quotas after the U.K. breaks fully free of the EU.

Mr. Trump stunned Republicans and Democrats alike when he said this week he was unhappy with the Bill, which provides $892 billion in coronavirus relief, including extending special unemployment benefits expiring on December 26, and $1.4 trillion for normal government spending.

India lost two wickets in as many overs to the relentless Pat Cummins as Australia grabbed early honours on the second day of the second Test on Sunday.

De Silva made a dashing 79 before he had to retire hurt with what appeared to be a left hip injury. Chandimal surpassed that with his 85 and wicketkeeper Niroshan Dickwella chipped in with 49.