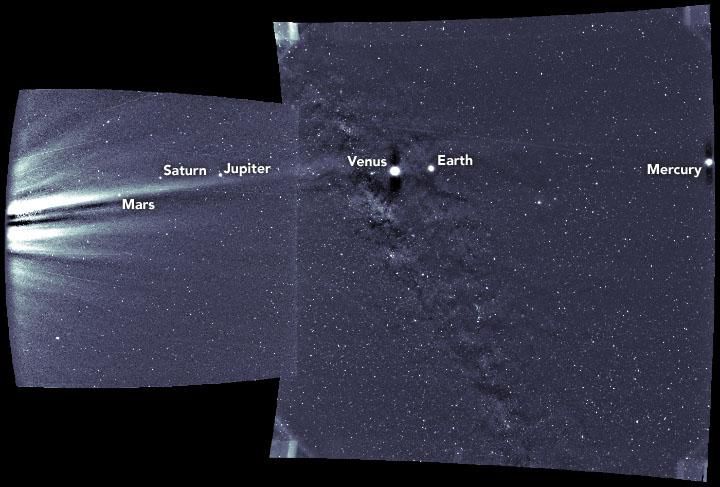 Here’s a daily dose of wonder for you: a spacecraft, one currently spiralling through the inner solar system on its way to the Sun, managed to photograph six of the solar system’s planets — Mars, Saturn, Jupiter, Venus, Earth and Mercury, all glinting in starlight.

NASA’s Parker Solar Probe, launched in August 2018, is using Venus’ gravity well to sweep ever closer to the Sun over the next few years; one of its solar flybys will get as close as 3.83 million miles. As well as getting an unprecedentedly clear picture of the stellar furnace at the heart of our solar system, it will be the first spacecraft to fly through the Sun’s outer atmosphere, a poorly understood and scorching-hot layer known as the corona.

As serendipity would have it, on June 7th of last year, its Wide-field Imager for Solar Probe or WISPR instrument was in view of most of the solar system’s planets. These two image frames, stitched together, show the Sun off to the left, with the rocky worlds and gas giants splayed out beautifully to the right.

It isn’t the only spacecraft with such entertaining photographic prowess. As noted by a recent blog post on NASA’s Earth Observatory blog, the space agency’s Solar and Terrestrial Relations Observatory or STEREO also saw the same six worlds from its own home elsewhere in the inner solar system. It snapped its own sextuplet shot with its heliospheric imagers, cameras primarily designed to track the ejection of matter from the Sun out into space.

Our solar system is cool, of that there is no doubt. But the fact that we can take portraits of it like this, seemingly just for fun, is even cooler.