Parliament proceedings updates | Both Houses adjourned for the day 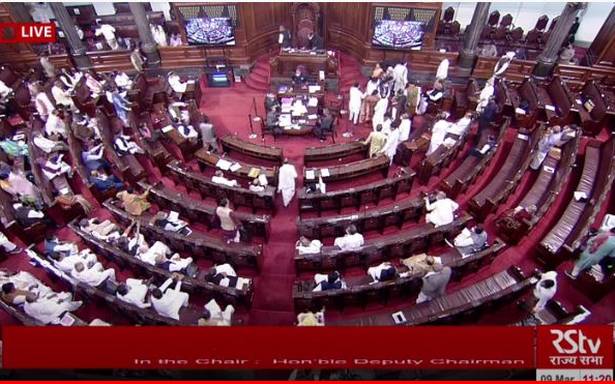 For the first time in a year, Members of both Houses sat in their respective chambers instead of being spread across the two chambers. Sources said the pre-COVID-19 timings and seating arrangement are being restored to to provide more time to each of the Houses so that the Budget session can be wrapped up before schedule, as per the demand of the MPs. The MPs, however, continued to sit in the galleries of the chamber to maintain physical distance as per the COVID-19 protocol.

Lok Sabha members from the poll-bound West Bengal, Assam, Tamil Nadu, Kerala and Puducherry have requested an early curtailment of the second part of the Budget session that began on Monday. Sources said nearly 145 Parliamentarians have written to Speaker Om Birla on the matter.

Multiple adjournment motions marred the working of the Rajya Sabha on the first day of the second part of the Budget session, with Opposition leaders demanding a debate on the “huge and frequent” increase in petrol, diesel and LPG prices. The Lok Sabha, too, saw disruptions on the issue of a separate discussion on fuel price hike.

Rajya Sabha takes up The Arbitration and Conciliation (Amendment) Bill, 2021. The Chair calls Congress member Vivek Tankha to speak. “How can I speak with the Leader of Opposition is standing?” Mr. Tankha urges the Chair to listen to Mr. Kharge first.

Mr. Kharge continues to press for discussion on fuel price hike. He demands bringing them back to 2014 rates.

The Chair calls Manoj Jha. The House is not in order, says Prof. Jha.

“It is an unfortunate thing that repeatedly the norms of this Parliament has been violated. When the opposition is raising an issue, the government should not try to introduce a new business without first settling the question raised by the opposition,” says Anand Sharma.

House adjourned for the day.

Lok Sabha adjourned for the day

As Lok Sabha reassembled at 2 pm, Rajendra Agarwal was in the Chair. He proceeds with Zero Hour. However, Opposition members insist on a discussion on fuel price hike.

House is adjourned for the day.

Rajya Sabha resumes for the third time since morning. So far, protests from opposition demanding a debate of hike in fuel prices has forced two adjournments.

Meenakshi Lekhi, in the Chair, turns down the adjournment motions on various issues.

The Question Hour continues amidst protests.

DMK MP Tiruchi Siva raises a point of order: “We agree with you that important issues are being discussed, but the hike in fuel prices is disturbing everyone. And a discussion can not happen in din. Kindly bring, the House in order.”

Bhupender Yadav counters Mr. Siva’s argument. “The Chairman has already given a ruling in this regard and it can’t be revisited. The Opposition should let the house run.”

Deputy Chairman Harivansh appeals to Leader of Opposition and Congress leader Mallikarjun Kharge to bring the House in order.

Question 201, on norms for procurement of foodgrains, is in progress. Opposition is still raising slogans. Manish Tewari responds to a question by Harsimrat Kaur Badal.

Opposition continues to raise slogans of “We want justice”.

Questions 202, on schemes for enhancing fisheries production, is now being taken up.

This is a temporary arrangement for the remaining part of the Budget Session, he says.

Proceedings begin in both Houses

Rajya Sabha and Lok Sabha proceedings begin. This is the first time in a year that the Parliament sittings have resumed to pre-COVID timings.

In the Rajya Sabha, papers of various committees are laid before the House.

In the Lok Sabha, Congress leader Adhir Ranjan Chowdhury claims “digital discrimination” and asks that the camera focus on everyone in the House and not “black out” the Opposition voices. The House erupts in chaos as a Member asks, “What do you want to show the country? The disruptions?” Lok Sabha Speaker asks the House to continue with Question Hour amid the sloganeering by Opposition parties.

Bills for consideration and passing:

The Arbitration and Conciliation (Amendment) Bill, 2021

The National Institutes of Food Technology, Entrepreneurship and Management Bill, 2019

Bills for consideration and passing