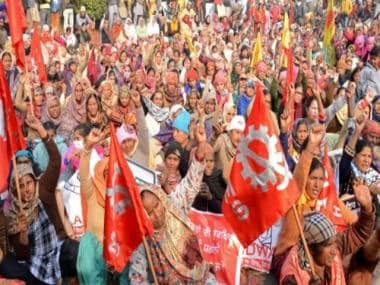 The crucial tenth round of talks between the Centre and protesting farmers’ unions was on Monday postponed from 19 January to 20 January.

“The government’s ministerial meeting with farmers unions will be held on 20 January at 2 pm at Vigyan Bhawan, instead of 19 January,” the Agriculture Ministry said in a statement on Monday.

Earlier on Monday, the Centre had said both sides want to resolve the long-continuing stalemate at the earliest but it was getting delayed due to the involvement of people of “other ideologies”.

Asserting that the new farm laws are in the interest of the farming community, the government said obstacles occur whenever good things or measures are taken and it is taking longer to resolve the issue as farmers’ leaders want a solution “their own way”.

On the other hand, farmers’ unions protesting the new agricultural legislations on Monday asserted that they had the constitutional right to demonstrate peacefully on Republic Day, and reiterated that they would go ahead with the proposed tractor rally on 26 January.

This declaration came hours after the Supreme Court told the Centre that the proposed tractor rally by farmers was a matter of law and order, and the Delhi Police is the first authority to decide who should be allowed to enter the National Capital. “We are not going to tell you what to do,” a bench headed by Chief Justice of India SA Bobde said, adding that police has all the authority to deal with the matter.

The previous nine rounds of formal talks between the Centre and 41 farmer unions have failed to yield any concrete results to end the long-running protest at Delhi’s borders as the latter have stuck to their main demand of a complete repeal of the three acts.

Thousands of farmers, mainly from Punjab, Haryana and western Uttar Pradesh, are protesting at various border points of Delhi for over a month now against the three laws: the Farmers’ Produce Trade and Commerce (Promotion and Facilitation) Act, the Essential Commodities (Amendment) Act, and the Farmers (Empowerment and Protection) Agreement on Price Assurance and Farm Services Act.

Enacted in September 2020, the government has presented these laws as major farm reforms aimed at increasing farmers’ income, but the protesting farmers have raised concerns that these legislations would weaken the minimum support price (MSP) and “mandi” (wholesale market) systems and leave them at the mercy of big corporations.

The government has maintained that these apprehensions are misplaced and has ruled out a repeal of the laws.

‘Resolution getting delayed due people of other ideologies’

Speaking to PTI, Minister of State for Agriculture Parshottam Rupala said: “It is different when farmers talk to us directly. When leaders get involved, then it becomes difficult. There could have been early solution had the discussions were held with farmers directly.”

Since people of different ideologies have entered into the protest, they want a solution in their own way, he said.

“Both sides want a solution, but they have different points of view and hence it is taking more time. But a definite solution will emerge,” he noted.

Separately, Union Agriculture Minister Narendra Singh Tomar, while addressing a virtual event, reiterated that the three farm laws will be beneficial for farmers.

“These laws were expected earlier but the previous government could not implement because of pressure. It was the Modi government that took a bold step and brought these laws passed in Parliament… Whenever a good thing happens, there are obstacles,” Tomar said.

On the eve of the tenth round of meeting, a delegation of farmers representing over 270 farmer producer organizations from Madhya Pradesh, Uttar Pradesh, Assam, Karnataka, Chhattisgarh and Odisha met Rupala and appealed not to repeal the laws. Minister of State for Agriculture Kailash Choudhury was also present in the meeting.

“We support the new laws. We don’t want the government to repeal them,” Narendra Tomar of Gwalior-based Chambal Agro FPO said after the meeting.

Union minister Dharmendra Pradhan said the protests against the Centre’s farm laws were just a few people in disagreement and added that the changes allow farmers to sell their produce anywhere like traders.

Speaking to reporters in Betul, the Union minister for petroleum and gas also took a swipe at protesters claiming it was difficult to make those understand who wanted to remain asleep.

“The disagreement of a few people cannot be called a farmers agitation. Is it there in Betul? MP agriculture minister Kamal Patel has shared his experiences with me. We are talking in a straight manner and are able to put forth our views in villages,” he said.

He said the new farm laws allowed cultivators to sell their produce anywhere “just like a trader can sell his clothes in any market in the country”.

When queried on whether the Centre was not being able to make the protesters understand its viewpoint, Pradhan said, “We are trying to make them understand. But in a democracy, it is a little difficult to make those understand who want to remain asleep,” he said.

The Supreme Court-appointed committee on the three new farm laws is scheduled to hold its first meeting with members on Tuesday at Pusa campus in Delhi, its member Anil Ghanwat said.

“We are going to meet tomorrow. Only members will meet to discuss the terms of reference and decide the future course of action,” Ghanwat, president of Shetkari Sanghatana (Maharashtra), told PTI before boarding a flight to Delhi.

The Supreme Court had on 11 January stayed the implementation of the three laws, against which farmers are protesting at Delhi borders for over 50 days now, till further orders and appointed a four-member panel to resolve the impasse.

A bench headed by Chief Justice SA Bobde, hearing the Centre’s application seeking an injunction against the proposed tractor or trolley march or any other kind of protest which seeks to disrupt the gathering and celebrations of the Republic Day, said that police has all the authority to deal with the matter.

“Does the Supreme Court will say as to what are the powers of police and how they will exercise them? We are not going to tell you what to do,” said the bench, also comprising Justices LN Rao and Vineet Saran.

The apex court told Attorney-General KK Venugopal that it will take up the matter for further hearing on 20 January.

‘Farmers have constitutional right to take out tractor rally’

Protesting union leaders on Monday said that farmers have a constitutional right to take out their tractor rally peacefully and asserted that thousands of people will participate in the proposed event on 26 January.

Bhartiya Kisan Union (Lakhowal) Punjab general secretary Paramjit Singh said that farmers are not going to hold their rally on Rajpath and in other high-security areas, adding that they would only take out it on the Outer Ring Road in Delhi and that there will be no disruption in the official Republic Day parade.

“We are stuck at the Delhi borders. We have not decided to sit at these borders ourselves, we have been stopped from entering Delhi. We will take out the rally peacefully without disrupting any law and order. We will exercise our constitutional right and we will definitely enter Delhi,” Singh told PTI.

Another farmer leader Lakhbir Singh, who is vice president (Punjab) of All India Kisan Sabha, said that farmers will return to protest sites after taking out the tractor rally on the Outer Ring Road on 26 January.

From taking centre stage to handling backstage responsibilities, managing crowd and collecting donations, women farmers took over the reins of the ongoing agitation against farm laws at multiple Delhi border points on Monday as they marked the day as ‘Women Farmers’ Day’.

A large number of women from various states reached the sites of protest against the Centre’s three farm laws that has been going on for over 50 days now.

At the Singhu border, the epicentre of the agitation, many women farmers were seen regulating entry at select locations, coordinating among volunteers and ensuring that the day’s proceedings went seamlessly, jobs that were taken care of by men till now.

“The stage at the Singhu border was managed by only women and all the speakers were women. In different places across India, women farmers organised rallies, dharnas, and meetings to mark the day,” said Kavitha Kuruganti of the All India Kisan Sangharsh Coordination Committee (AIKSCC).