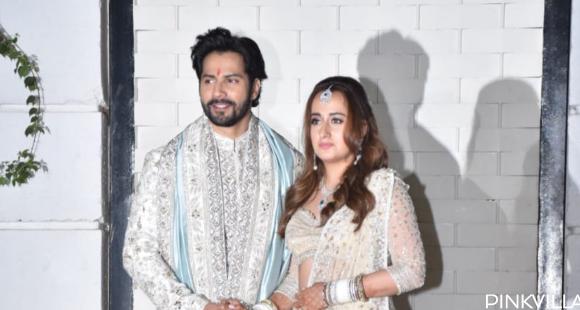 Varun Dhawan has finally tied the knot with his ladylove Natasha Dalal. Meanwhile, check out their exclusive pictures.

Varun Dhawan and Natasha Dalal are now officially man and wife. The couple got married at a private ceremony in Alibaug. There were reports earlier that they would be coming out of the venue for photos after taking the wedding vows. It turns out that the couple definitely did the same. After the completion of the rituals, the actor and his newly wedded wife did step out and pose for the paparazzi. These pictures of the couple will surely leave the fans elated.

The newlyweds look elated as they pose for the shutterbugs. Initially, they are seen stepping out of the venue walking hand in hand as they don similar outfits. The actor looks suave in an embellished blue and white sherwani teamed up with a pair of matching mocassins. His ladylove, Natasha, on the other hand, looks stunning in a heavily embellished lehenga teamed up with a matching blouse and dupatta. She wears accessories that perfectly compliment her attire for the night.