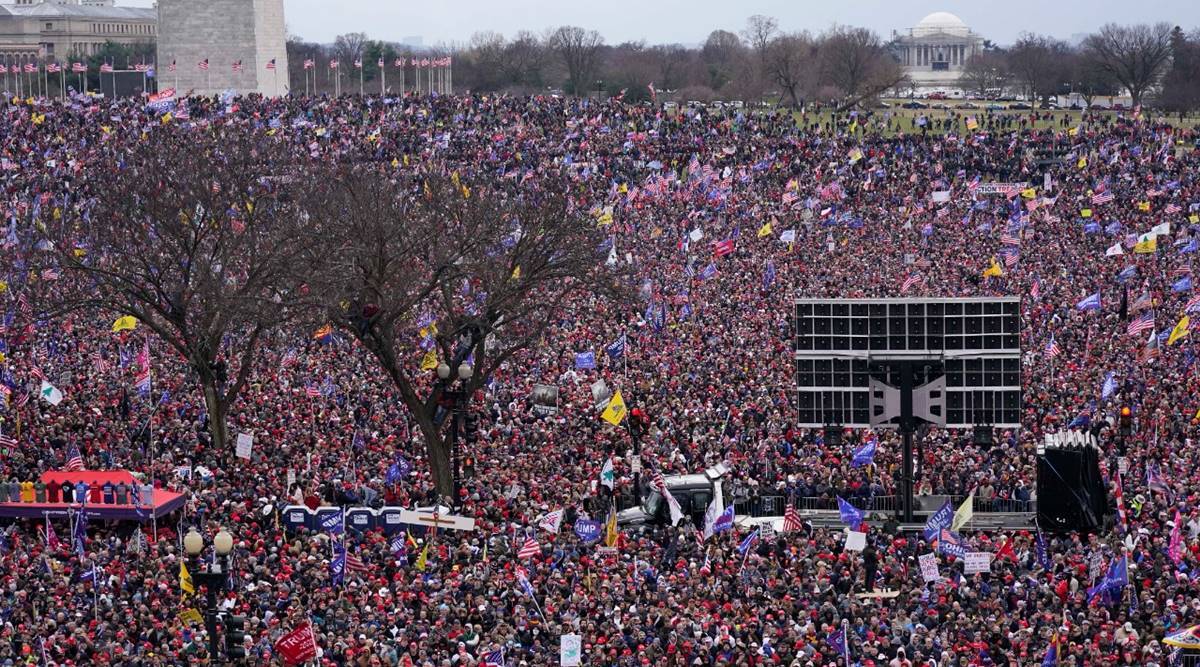 Congress convened Wednesday for an extraordinary joint session to confirm the Electoral College vote won by Joe Biden, in the face of President Donald Trump’s relentless effort to overturn the election and cling to the White House.

The typically routine proceeding was anything but, as Trump mounts his desperate attempt to stay in office. Trump’s Republican allies in the House and Senate planned to object to the election results, heeding supporters’ pleas to “fight for Trump” as the president himself staged a huge rally outside the White House. The fight is tearing the Republican Party apart.

The last-gasp effort is all but certain to fail, defeated by bipartisan majorities in Congress prepared to accept the November results. Biden, who won the Electoral College 306-232, is to be inaugurated Jan. 20.

Still, Trump vowed to he would “never concede” and urged the massive crowd to march to the Capitol where hundreds had already gathered under tight security. “We will never give up,” Trump told the noontime rally.

The joint session of Congress, required by law, convened before a watchful, restless nation months after the election, two weeks before the inauguration’s traditional peaceful transfer of power and against the backdrop of a surging COVID-19 pandemic.

US Speaker of the House Nancy Pelosi, and Vice President Mike Pence officiate as a joint session of the House and Senate convenes to confirm the Electoral College votes cast in November’s election, at the Capitol in Washington, January 6. (Photo: AP)

Lawmakers were told by Capitol officials to arrive early, due to safety precautions with protesters in Washington. Hundreds of Trump supporters filled the Capitol plaza area and sidewalks, many bearing enormous flags and few wearing masks. Visitors, who typically fill the galleries to watch landmark proceedings, will not be allowed under COVID-19 restrictions.

The session also comes as overnight results from Georgia’s runoff elections put Democrats within reach of a Senate majority.

The current majority leader, Mitch McConnell, who tried to warn his Republican Party off this challenge, was expected to deliver early remarks. Democratic House Speaker Nancy Pelosi called it a day of “enormous historic significance,” about “guaranteeing trust in our democratic system.“

But it was Vice President Mike Pence who was most closely watched as he stepped onto the dais to preside over the session in the House chamber.

Despite Trump’s repeated claims of voter fraud, election officials and his own former attorney general have said there were no problems on a scale that would change the outcome. All the states have certified their results as fair and accurate, by Republican and Democratic officials alike.

Pence has a largely ceremonial role, opening the sealed envelopes from the states after they are carried in mahogany boxes used for the occasion, and reading the results aloud. But he is under growing pressure from Trump to overturn the will of the voters and tip the results in the president’s favor, despite having no legal power to affect the outcome.

“Do it Mike, this is a time for extreme courage!” Trump tweeted Wednesday.

If Vice President @Mike_Pence comes through for us, we will win the Presidency. Many States want to decertify the mistake they made in certifying incorrect & even fraudulent numbers in a process NOT approved by their State Legislatures (which it must be). Mike can send it back!

With the Senate results from Georgia streaming in and Democrats within reach of controlling the chamber, Trump amplified his pleas to stay in office as a veto check on the rival party. At the rally he said he had just talked to Pence and criticized Republicans who are not willing to fight for him as “weak.”

While other vice presidents, including Al Gore and Richard Nixon, also presided over their own defeats, Pence supports those Republican lawmakers mounting challenges to the 2020 outcome.

It’s not the first time lawmakers have challenged results. Democrats did in 2017 and 2005. But the intensity of Trump’s challenge is like nothing in modern times, and an outpouring of current and elected GOP officials warn the showdown is sowing distrust in government and eroding Americans’ faith in democracy.

Sen. Mitt Romney, R-Utah, told reporters on Capitol Hill that Trump’s election challenge has “disgraced the office of the presidency.“

“We’ll proceed as the Constitution demands and tell our supporters the truth — whether or not they want to hear it,” Romney said.

Still, more than a dozen Republican senators led by Josh Hawley of Missouri and Ted Cruz of Texas, along with as many as 100 House Republicans, are pressing ahead to raise objections to individual states’ reports of Biden’s wins. Senator Josh Hawley walks into the US House chamber before a joint session convenes to count the electoral votes cast in November’s election, at the Capitol on Jan 6. (Photo: AP)

Under the rules of the joint session, any objection to a state’s electoral tally needs to be submitted in writing by at least one member of the House and one of the Senate to be considered. Each objection will force two hours of deliberations in the House and Senate, ensuring a long day.

House Republican lawmakers are signing on to objections to the electoral votes in six states _ Arizona, Georgia, Nevada, Michigan, Pennsylvania and Wisconsin.

Arizona will likely be the first to be disputed as the state tallies are announced in alphabetical order. Cruz has said he will join House Republicans in objecting to that state, even as he acknowledged the effort will not have the votes to succeed. “Extraordinarily uphill,“ he said late Tuesday on Fox News.

Hawley has said he will object to the election results from Pennsylvania, almost ensuring a second two-hour debate despite resistance from the state’s Republican senator, Pat Toomey, who said the tally of Biden’s win is accurate.

Sen. Kelly Loeffler may challenge the results in her state of Georgia. She was defeated in Georgia’s runoff to Democrat Raphael Warnock, but can remain a senator until he is sworn into office.

The other Senate runoff race between Republican David Perdue and Democrat Jon Ossoff remained too early to call Wednesday, though Ossoff declared he won. Perdue, who was seeking reelection, is ineligible to vote in the Senate because his term expired with the start of the new Congress Sunday.

Democrats have the majority in the House, while the Republican-led Senate is divided over the issue. Bipartisan majorities in both chambers are expected to soundly reject the objections.

The group led by Cruz is vowing to object unless Congress agrees to form a commission to investigate the election, but that seems unlikely.

Those with Cruz are Sens. Ron Johnson of Wisconsin, James Lankford of Oklahoma, Steve Daines of Montana, John Kennedy of Louisiana, Marsha Blackburn of Tennessee, Mike Braun of Indiana, Cynthia Lummis of Wyoming, Roger Marshall of Kansas, Bill Hagerty of Tennessee and Tommy Tuberville of Alabama.

Many of the Republicans challenging the results said they are trying to give voice to voters back home who don’t trust the outcome of the election and want to see the lawmakers fighting for Trump.

Hawley defended his role saying his constituents have been “loud and clear” about their distrust of the election. “It is my responsibility as a senator to raise their concerns,“ he wrote to colleagues.

As criticism mounted, Cruz insisted his aim was “not to set aside the election” but to investigate the claims of voting problems. He has produced no new evidence.

Both Hawley and Cruz are potential 2024 presidential contenders, vying for Trump’s base of supporters.

US Congress convenes to confirm Biden while Trump allies object