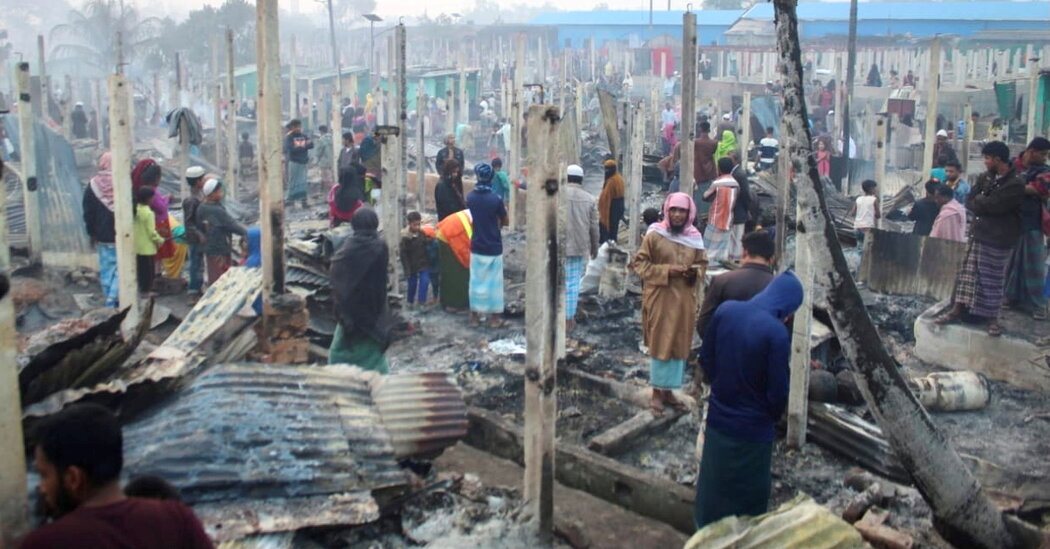 Ms. Khatoon, 34, fled the Rakhine State in 2017 and gave birth to her second child in the camp. She said she had turned her small hut into a home for her family. Now, she said, she and her family had no food to eat and nowhere to go.

More than 730,000 Rohingya, a predominantly Muslim ethnic group, have fled Myanmar to Bangladesh since a campaign of killing, rape and arson began against them in 2017. The town of Cox’s Bazar, in southern Bangladesh, has turned into a makeshift home for hundreds of thousands of Rohingya refugees fleeing the campaign of violence carried out by Myanmar’s army. The Rohingya have been persecuted relentlessly by the government and mobs of Buddhists, who make up the majority in Myanmar.

The settlements there turned into mega camps as the huge influx of desperate people fleeing war or persecution continued to trickle in. Onno van Manen, a country director for Save the Children in Bangladesh, said the fire was yet another devastating blow for the displaced Rohingya Muslims.

Mr. Manen said that since 2017 more than a million refugees, half of whom are children, have lived in cramped camps with little freedom of movement, inadequate access to education and abuse, including child marriage.

“Put simply, despite the relentless efforts of humanitarian communities, a refugee camp is no place for a child to grow up,” he said.

In May last year, a similar fire reduced to ashes over 400 shelter homes in the nearby Kutupalang refugee camp in Cox’s Bazar. And with an increasing population and new shelter homes being built over time, officials say it has become increasingly difficult for firefighters to navigate slum areas.

The authorities in Bangladesh say they are trying to reduce the population at some camps, with a plan to move 100,000 people to an island in the Bay of Bengal. Rights groups have criticized the plan, saying that the Rohingya were yet again being forcibly displaced.