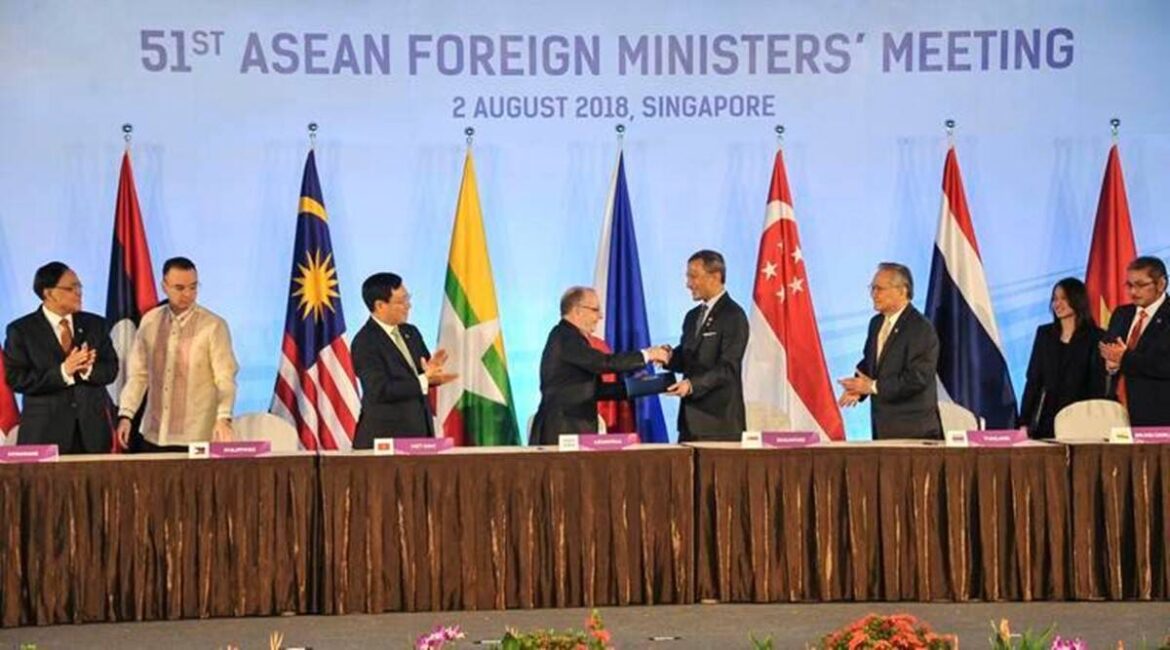 The EU has earmarked millions of euros for supporting climate friendly development in Southeast Asia. But the EU’s climate diplomacy in the region is up against economic growth fueled by dirty energy.

After the European Union became a “strategic partner” of the Association of the Southeast Asian Nations (ASEAN) bloc in December 2020, both blocs pledged to make climate change policy a key area of cooperation.

The EU, already the largest provider of development assistance to the ASEAN region, has committed millions of euros to various environmental programs.

This includes €5 million ($5.86 million) to the ASEAN Smart Green Cities initiative and another €5 million towards a new means of preventing deforestation, called the Forest Law Enforcement, Governance and Trade in ASEAN.

For years, the EU has been working on climate action in Southeast Asia by organizing dialogues and technical assistance projects. Igor Driesmans, the EU’s ASEAN ambassador recently said the two blocs would soon start a “dedicated dialogue” on clean energy transition.

However, Brussels faces an uphill struggle to turn around the region’s environmental policy.

Five ASEAN states were among the fifteen countries most affected by climate change between 1999–2018, according to the Climate Risk Index 2020.

As a fast-developing region, where economic growth, urbanization and domestic consumption rates are expected to spike in the coming decades, Southeast Asia’s energy demand is projected to grow 60% by 2040.

This will contribute to a two-thirds rise in CO2 emissions to almost 2.4 gigatons, according to the Southeast Asia Energy Outlook 2019.

Of the numerous environmental problems facing the region, perhaps the most consequential is the continuing uptake of coal for electricity generation, said Nithi Nesadurai, the regional coordinator of Climate Action Network Southeast Asia.

“This is contributing to rising emissions and does not augur well for the region, even as the share of renewable energy in the energy mix increases at marginal levels,” he told DW.

Southeast Asia is one of the few areas of the world where coal usage has increased in the past decade. In 2019, the region consumed around 332 million tons of coal, nearly double the consumption from a decade earlier, according to the International Energy Agency (IEA).

Of that, Indonesia accounted for 42% and Vietnam nearly a third. In 2019, the region’s imports of thermal coal rose by 19% compared with the previous year, according to an IEA report.

Energy generated from coal doubled in the Philippines between 2011 and 2018, when it accounted for 53% of energy consumption, according to the country’s Department of Energy.

Coal is expected to account for more than 50% of Vietnam’s energy supply by 2030, the World Coal Association, an industry body, predicts.

Even Laos, which has built hundreds of hydropower dams over the past decade, saw coal-fired energy production rise from almost nothing to 10,000 GWh in 2017.

In February, Laos’ deputy minister of energy and mines, Daovong Phoneke, announced that two new coal-fired energy plants, with investments worth up to $4 billion, will open by the end of the year, mostly to export energy to neighboring countries.

According to a study published in November in the journal of Energy and Climate Change, coal-fired energy will overtake natural gas as the main power source in the ASEAN region by 2030. And by 2040 it could account for almost 50% of the region’s projected CO2 emissions.

Is the EU ignoring coal in Southeast Asia?

However, coal-fired power production is rarely, if ever, mentioned by the EU in its climate policy in Southeast Asia.

After the second EU-ASEAN High-Level Dialogue on Environment and Climate Change in November, a post-dialogue statement by the two blocs did not reference coal-fired energy. Neither is coal mentioned in detail in the Blue Book 2020, a 47-page guide that lays out EU-ASEAN partnership.

“The mix of a strong research base, policy advice, feasibilities for collaboration, and access to finance should help them to cope with the transition,” said Driesmans, the EU ambassador, referring to the ASEAN bloc’s climate change activity.

“As part of the forthcoming dialogue on Clean Energy between the EU and ASEAN, we hope to be able to support ASEAN in its energy transition, including all relevant aspects: renewable energy, energy efficiency, grid integration, climate finance and coal phase out.,” he added.

The EU tends to take a more subtle approach. The EU-Vietnam free trade agreement, which came into effect last year, commits Vietnam to making efforts towards renewable energy production but there is no explicit mention of limiting its coal-fired energy consumption.

Indeed, if the EU takes a strong forceful stance on coal consumption in the region, it could spark anger from the main exporters of the commodity, China, India and Australia.

Brussels’ climate change policy in the region has already been met with resistance.

Indonesia last year initiated proceedings at the World Trade Organization against the EU’s phased ban on palm-oil imports. Brussels contends the ban is to protect the environment, but Indonesia, the world’s largest palm oil producer, says it is mere protectionism.

Malaysia, the world’s second-largest palm oil producer, has vowed to stand with Jakarta in its battle against the EU.

In the latest State of Southeast Asian survey, published in February by Singapore’s ISEAS-Yusof Ishak Institute, some 43% of respondents said they trusted the EU because of its stance on the environment, human rights, and climate change.

However, 15.1% said they distrusted the EU for this reason, believing its environmental policy could threaten their country’s interests and sovereignty.

The other problem for the EU is that it risks accusations of hypocrisy if it takes too forceful a stance on coal-fired energy production in Southeast Asia.

But Poland and the Czech Republic remain dependent on coal-fired energy production, although the former contributed to almost 95% of the EU’s total hard coal production by 2019. And, according to the International Energy Agency, Southeast Asia and Europe each accounted for around 11% of the world’s thermal coal imports in 2019.

“I think Southeast Asian countries would welcome [more] EU aid,” said Kurlantzick. “But I don’t know that they are going to change their reliance on coal fired plants.”