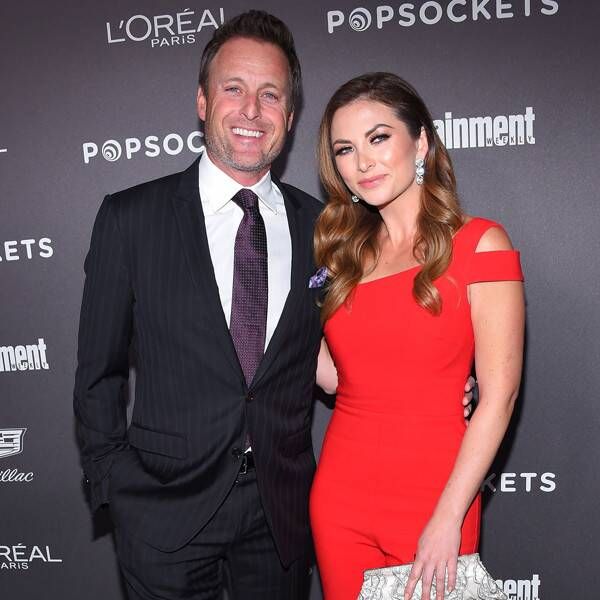 Chris Harrison‘s girlfriend is breaking her silence on The Bachelor host.

Entertainment Tonight correspondent Lauren Zima, who has been dating the ABC star since early 2019, took to Instagram Stories to discuss the backlash her boyfriend has received in recent days.

The timing of the journalist’s post came only an hour after Chris issued his second apology to Bachelor Nation and to those he hurt for his “ignorance.” Additionally, Chris announced that he would temporarily be “stepping aside” from the ABC franchise.

“What Chris said was wrong and disappointing,” Lauren, 33, began her caption on Saturday, Feb. 13. “Defending racism can never happen. Accountability comes first, what’s next is learning and growth.”

This is the first time the reporter has spoken out about her boyfriend’s controversial comments, in which he discussed the backlash surrounding Bachelor contestant Rachael Kirkconnell‘s social media behavior.

On Saturday, Chris acknowledged his actions and said he was using this as a learning experience to be better.

“Hello everyone, I have spent the last few days listening to the pain my words have caused, and I am deeply remorseful,” his post began. “My ignorance did damage to my friends, colleagues and strangers alike. I have no one to blame but myself for what I said and the way I spoke.”

“I set standards for myself, and have not met them,” he continued. “I feel that with every fiber of my being. Now, just as I taught my children to stand up, and to own their actions, I will do the same. By excusing historical racism, I defended it. I invoked the term ‘woke police,’ which is unacceptable. I am ashamed over how uninformed I was. I was so wrong.”

The Bachelor Nation star, who is currently hosting Matt James‘ historic season of The Bachelor, then directly apologized to the people his words hurt. “To the Black community, to the BIPOC community: I am so sorry,” he wrote. “My words were harmful. I am listening, and I truly apologize for my ignorance and any pain it caused you.”

He added, “I want to give my heartfelt thanks to the people from these communities who I’ve had the enlightening conversations with over the past few days, and I am so grateful to those who have reached out to help me on my path to anti-racism.”

Chris noted that after much reflection, he feels it’s best to temporarily depart from the ABC franchise.

“The historic season of The Bachelor should not be marred or overshadowed by my mistakes or diminished by my actions,” he explained. “To that end, I have consulted with Warner Bros. and ABC and will be stepping aside for a period of time and will not join for the After the Final Rose special.”

According to a source, Chris “will appear in the remaining episodes of this season, which filmed at the end of 2020.”

“He will also appear at Women Tell All episode on March 1, which was pre-taped earlier this month in Los Angeles,” notes the source, adding, “The After the Final Rose special has not yet filmed, and additional details will be shared at a later date.”

It’s unclear if Chris will be replaced for The Bachelor special and how long his exit will be for.

As the 49-year-old old put things, “I am dedicated to getting educated on a more profound and productive level than ever before. I want to ensure our cast and crew members, to my friends, colleagues and our fans: this is not just a moment, but a commitment to much greater understanding that I will actively make every day.”

Chris concluded, “From here I can only try to evolve and be a better man, and I humble myself before all of you. I hope I will again live up to the expectations you all rightfully have for me and the expectations I have for myself.”

Earlier this week, Chris issued an apology after he came under fire for defending Rachael in an Extra interview with Rachel Lindsay, the first Black Bachelorette lead.

“To my Bachelor Nation family–I will always own a mistake when I make one, so I am here to extend a sincere apology,” he wrote on Feb. 10. “I have this incredible platform to speak about love, and yesterday I took a stance on topics about which I should have been better informed. While I do not speak for Rachael Kirkconnell, my intentions were simply to ask for grace in offering her an opportunity to speak on her own behalf.”

“What I now realize I have done is cause harm by wrongly speaking in a manner that perpetuates racism, and for that I am so deeply sorry,” he continued. “I also apologize to my friend Rachel Lindsay for not listening to her better on a topic she has a first-hand understanding of, and humbly thank the members of Bachelor Nation who have reached out to me to hold me accountable. I promise to do better.”

Earlier this year, Rachael, who is still competing on Matt’s season, received criticism after photos from her college days resurfaced on Reddit. In the images, which E! News hasn’t verified, Rachael was seen attending a fraternity formal in 2018. Of the post, the Redditor described the event as an “antebellum plantation themed ball.”

Rachael responded to the controversy on Feb. 11, writing in part, “At one point, I didn’t recognize how offensive and racist my actions were, but that doesn’t excuse them. My age or when it happened does not excuse anything. They are not acceptable or okay in any sense. I was ignorant, but my ignorance was racist.”

You can read through Chris’ apologies here and here. Following the host’s backlash, Bachelor Nation stars have spoken out about the situation. Read their comments here.