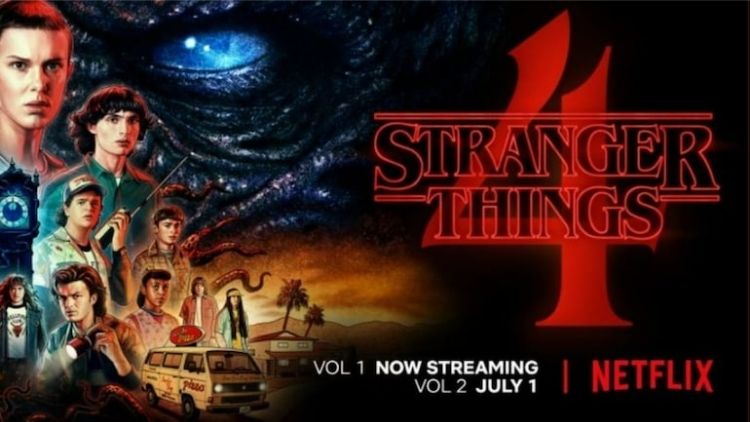 Part two of Stranger Things season 4 only consists of two episodes. Part 1 had seven, but that doesn’t mean it’s a quick watch. Get ready to set aside 4 hours for just about all the upside down madness you can handle and you can rest assured that there is never a dull moment. This is Stranger Things at its most emotional, thrilling and ambitious season. Guaranteed to give fans everything they want and a whole lot more.

The branching narrative style of storytelling that was established in the first part finally converges in a way that feels mostly very satisfying. The first 7 episodes constantly jumped from California to Hawkins to Russia. And while there’s still a good amount of that in part two, for the most part it manages to bring our players together in a way that pays off the patience that was required for part one. The biggest complaint about part one was that the Mike, Will, Jonathan and Argyle subplot in California didn’t feel in step with the rest of the season. Feeling less necessary than the Hawkins and Russia storylines. The good news is that this is largely fixed in part two.

There’s a ton of effects heavy action and exciting plot momentum. But one of the most impressive things about these 2 episodes is how many moments of tenderness it manages to squeeze in between various characters. While the run times may seem overwhelming for some, not one bit of it feels rushed though. The action, emotional beats and the many answered questions about the show’s lore are given plenty of time to breathe. Once again the Hawkins storyline is the strongest and it’s extraordinarily good at building tension. For the first time in a long time it truly feels like we could lose some of these characters and it makes for a nerve-wracking watch.

In this installment it might have felt a little more manageable if episode 9 were split up into two episodes instead of giving us such a pack to the brim. Both episodes 8 and 9 feel like big blockbuster movies in every way. Especially in the effects, stunts and production. The final two episodes of Stranger Things season four are most emotional, action-packed and tension-filled. There are as many thrills as you could hope for but also quite a few lovely tender moments between characters we’ve come to care so much about. It’s especially nice to see Noah Schnapp (Will) get a bit more attention than he did in part one. It still ends up feeling a tad bit long but ultimately these four hours pack in just about everything a Stranger Things fan could ask for.