The content gives major spoilers of the movie, Gehraiyaan to enhance the reading experience. 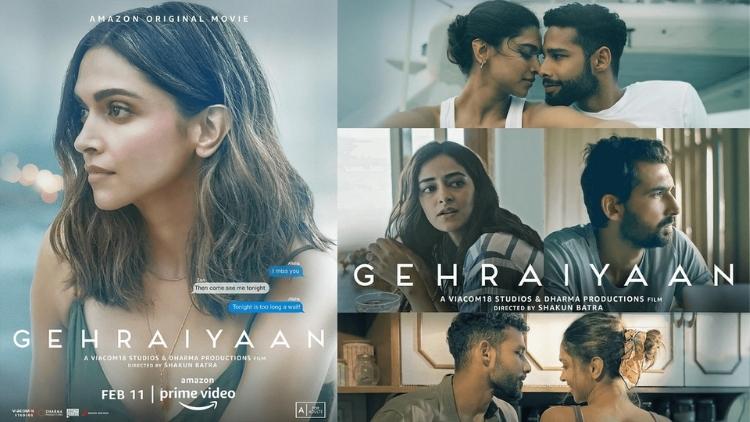 On 11th February 2022, Geheraiyan released on Amazon Prime starring Deepika Padukone, Ananya Pandey and Siddhant Chaturvedi. The movie has a run time of over 2 hours and has a very unique storyline. When the trailer released, it did not give away much about the film except the part where the viewers can see the characters cheating on each other. Audiences thought there is more to the story, but there is really not much to it than that. It seems like the maker have tried to glorify cheating in relationships in a way. The movie should also have a disclaimer about mental health triggers because all the movie shows is childhood trauma and infidelity.

The movie starts with Deepika’s character Alisha as a little girl who lost her mother at a very young age. Alisha blaming her father for her mother’s discontent and eventual suicide. She has a compromised relationship with her fiancé and has a cousin Tia (Ananya Pandey) who is back from U.S. and is dating Zain (Siddhant Chaturvedi), who works as a realtor. They all meet at the villa in Alibaug owned by Tia and Alisha’s family. They go there on a private yacht that Zain had rented for some time.

Zain and Alisha are instantly attracted to each other and start cheating on their fiancés till Alisha decides to call off her relationship and decides to be with Zain. Zain must repay Tia’s fathers investments in his company. But soon gets to know that a finding he received by someone is a money launderer and his company can be sued at any time. He tries to find solutions but finally has to resort to Tia’s help for the money.

In an attempt to conceal his infidelity, he tries to poison Alisha to death on his yacht. But she finds out the truth and in a montage of struggle with Zain ends up throwing Zain in the ocean and he dies. Zain’s manager covers up for Alisha, but she comes to know from Tia that the villa in Alibaug was under Alisha’s name because her mom and Tia’s father had an affair. This triggers Alisha and she tries to self-harm. She then decides to confront her father and make things right. In the end, Alisha and Tia decide to start anew and be happy in their lives.

This movie is a unique concept and is a onetime watch. It has some really good songs and has a pleasing cinematography. Although a unique concept, the movie felt starched at a point and had many parts that should have has trigger warnings for people suffering from mental health disorders. Overall, I would give it a 3 out of 5 stars.