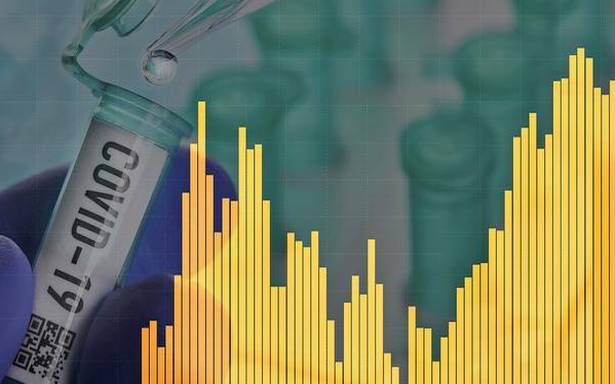 While there were no large surges even during the festival season, ICMR’s third serosurvey found only 21.5% of India has been exposed to the virus

Six months after India witnessed a peak, a spike in daily fresh COVID-19 cases is seen in a handful of States, particularly in Maharashtra. From 10.9 million cases across India as on February 17, the cases shot up to 11 million on February 26, with daily cases staying above 13,000 from February 18 onwards and even almost touching 17,000 on February 24.

“No, the increase in daily cases is only a spike. It cannot be called as the beginning of a second wave, not even in Maharashtra,” says Dr. Giridhara Babu, Epidemiologist at the Public Health Foundation of India, Bengaluru and a member of the Karnataka COVID-19 Technical Advisory Committee. “There’s no strict definition for what a wave is; usually, epidemiologists refer to the second wave as a resurgence of infection in an area where the transmission had decreased to below the outbreak potential but is now continually increasing over a certain period.”

Dr. Babu adds that the prerequisites for defining the second wave are that the first wave should have been contained — the reproduction number or R0 is below 1.5 and low rate of infection has been sustained for at least one month.

The Karnataka COVID-19 task force also considered other criteria to define the beginning of a new wave – the seven-day average growth rate should be in excess of normal expectancy and where the test positivity rate doubles in a week despite there being no changes in the testing pattern, and hospitalisations double in the corresponding seven consecutive days. Also, the cases should be increasing steadily after crossing the basic reproduction rate (R0) more than 1.5. “Any of the above conditions that shows a steadily increasing trend for over two-three weeks is to be used to define the beginning of a new wave,” he says.

Referring to sudden spurt in daily cases in Maharashtra, he says it is a bit too early to call it as a second wave. “Yes, the number of cases starting to recede around mid-January, but there has been a spike in new cases in the last one week. We need to wait and see if it is sustained over the next one week at least. If there is sustained increase in cases along with either a doubling in hospitalisation or test positivity rate in a week then we can call it a second wave, at least in Maharashtra,” Dr. Babu explains.

Since millions have been infected by the first wave in India, and there have been no large surges in cases even during the festival season, winter and large gatherings, will India ever witness a second wave? “With the currently prevailing strains, I do not think that India, as a nation, will have a second wave bigger than the first wave. If anything, we will have second waves regionally in States, which may occur over a period, depending on compliance to COVID-19 appropriate behaviour, testing levels and population movement. For instance, Delhi witnessed not one but three waves. But we may not see a sudden spurt in cases in the entire country all at once,” he adds.

The third serosurvey of ICMR found that only 21.5% of India (around 225 million people) has been exposed to the virus — and hence, a large population is still vulnerable to infection. Dr. Babu is not entirely convinced with the results of the third serosurvey. “There is a lot of uncertainty looming around how long the IgG antibodies can be detected. The evidence suggests that IgG estimation underestimates the overall level of protection in the community. This is corroborated by the higher level of antibodies seen in the serosurveys done in many metros, such as Mumbai and Delhi,” he says.

But all these assumptions would prove wrong if a new variant that shows greater transmissibility either arises in India or those circulating in other countries spreads here. Dr. Babu says: “Newer variants, especially those capable of immune escape, can change everything we know, and this is the only way to have a second wave more devastating than the first wave. As of now, we have not seen such trends affecting India.”