Farmers’ Protest LIVE Updates: Braving the harsh cold of Delhi, thousands of farmers protesting against the three recent agri laws remained steadfast in their demands of repealing the legislations as their agitation entered its fourth week 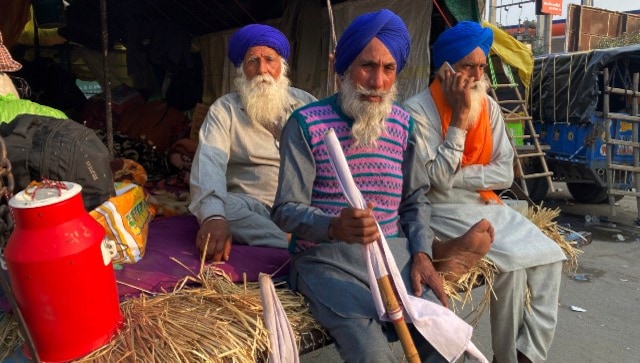 Farmers’ Protest LATEST Updates: Braving the harsh cold of Delhi, thousands of farmers protesting against the three recent agri laws remained steadfast in their demands of repealing the legislations as their agitation entered its fourth week.

The AIKS, that is spearheading the ‘Dilli Chalo’ agitation against the three farm laws, asserted that no farmer organisation approached the court in the first place and asked for its intervention in the matter.

Prime Minister Narendra Modi on Friday addressed farmers in Madhya Pradesh via video conference in a bid to generate positive opinion towards the new agricultural laws, which has seen farmers from Punjab, Haryana, Uttar Pradesh, Rajasthan and Madhya Pradesh protesting along Delhi’s borders since 26 November.

In his address, the prime minister highlighted the benefits of the new reforms and the pro-farmer actions taken by his government while also accusing the Opposition parties of misleading the famers over the issue of Minimum Support Price (MSP) and Ariculture Produce Market Committes (APMCs).

Hundreds of farmers are camping at several Delhi border points to press for the repeal of the Centre’s new farm laws.

Here are some main points of the prime minister’s speech:

In his speech, Modi said the new agricultural laws brought by the Centre have not come overnight, but were long overdue. He insisted that the existing regime of support price for farm produce will continue.

Political parties, agriculture experts and progressive farmers demanded such agri reforms for long, he said and attacked the Opposition for misleading cultivators on the issue of MSP (minimum support price) and APMCs.

He also urged political parties to “keep all the credit for their old election manifestos” which had reportedly promised agriculture sector reforms and asked them to stop misguiding the farmers over the new farm laws.

“If they want to take credit for these farm laws, they should do so, but they should stop misleading farmers on theissue by spreading lies,” he said.

The prime minister also accused the Opposition parties of lying to farmers, and asked why they didn’t implement the Swaminathan Commission report.

“Opposition parties, when in power, sat over the Swaminathan committee report for years, but the BJP-ledgovernment implemented its recommendations in the interest of farmers,” the prime minister said.

“If we’d to remove MSP, why would we implement Swaminathan Commission report? Our govt is serious about the MSP, that’s why we declare it before sowing season every year. This makes it easy for farmers to make calculations,” said Narendra Modi on Friday.