Home EntertainmentGossips Gauahar Khan and Zaid Darbar look adorable as they pose together for a selfie; Take a look

Gauahar Khan and Zaid Darbar look adorable as they pose together for a selfie; Take a look 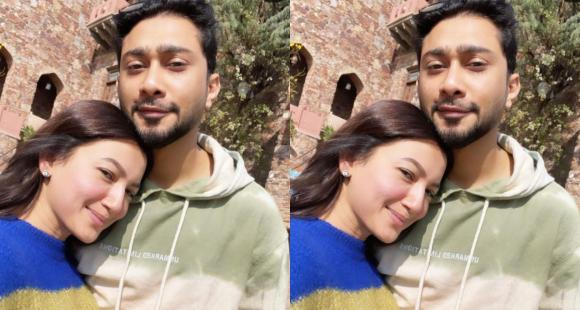 Gauahar Khan and Zaid Darbar got married back on December 25, 2020. Meanwhile, check out their latest picture.

Gauahar Khan and Zaid Darbar look adorable as they pose together for a selfie; Take a look

Numerous celebs decided to tie the knot last year. Among them were Gauahar Khan and her beau Zaid Darbar who got married on December 25, 2020. Despite their wedding being a private affair, the paparazzi did manage to get a glimpse of the newlyweds post which the pictures went viral on social media in no time. Both Gauahar and Zaid have been inseparable since then and often share pictures with each other on their respective social media handles.

As we speak of this, they have shared another lovey-dovey picture on Instagram that is sure to win hearts in no time. The former Bigg Boss winner is seen lovingly hugging her husband Zaid as they pose adorably for the picture. While the actress wears a blue and golden sweater, her hubby dearest, on the other hand, wears a grey and white hoodie. The couple often sets major relationship goals for others and this picture is proof of the same.

Rumours about Gauahar Khan’s plan to tie the knot with Zaid Darbar began way back during the time when she entered the Bigg Boss 14 house as a Toofani Senior. It was only after she made an exit from the reality show that the news was confirmed on the internet. The actress and Zaid Darbar finally got married at the ITC Maratha situated in Mumbai. Only close friends and family members of the couple attended the wedding festivities owing to the COVID-19 rules and regulations.

Also Read: Gauahar Khan & Zaid Darbar are a happy couple as they dance with others amid pre wedding festivities; WATCH