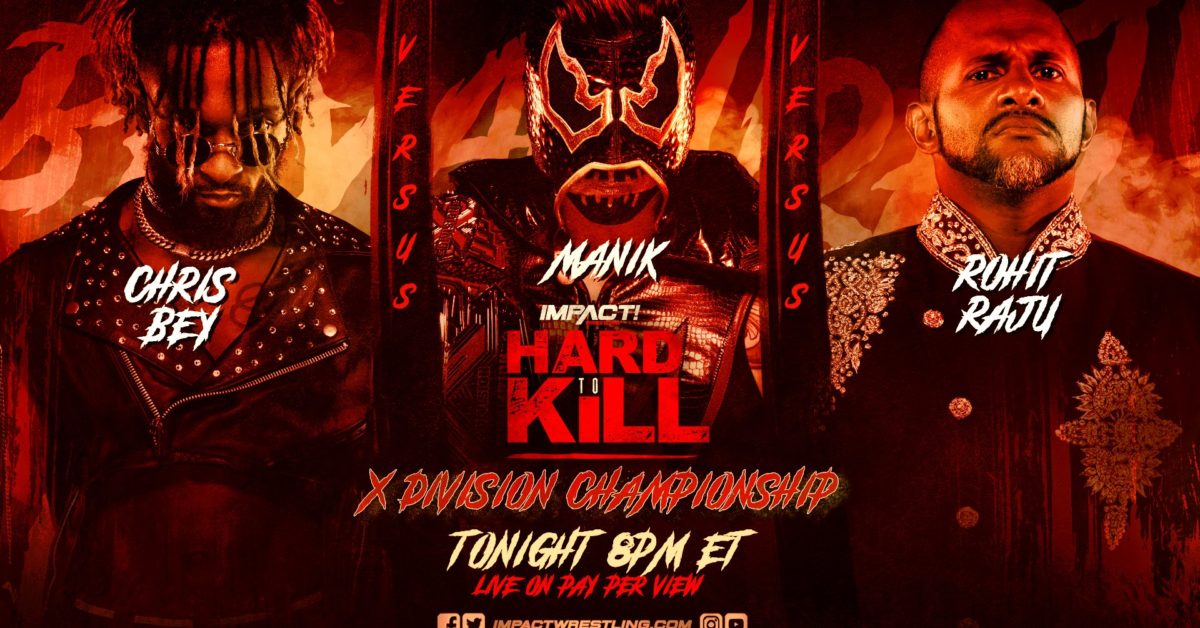 Impact Wrestling’s Hard to Kill PPV continues, as does Bleeding Cool’s live coverage of the show. I’m Jude Terror, batting cleanup in the coverage lineup tonight. We’re more halfway through the show now, and we just got a bonus match. Good to see Matt Cardona in Impact. Poor guy, making two debuts now without any fans in attendance though.

Bleeding Cool has insisted I post this SEO-optimized keyword-rich boilerplate text about Hard to Kill so they can get more clicks and make more money. And who am I to begrudge them that? Here it is:

Hard to Kill, the first PPV event of 2021 from Impact Wrestling, also features the culmination of the first part of the company’s crossover with AEW. AEW Champion Kenny Omega will team with Impact Tag Team Champions The Good Brothers to face Impact Champion Rich Swann, TNA Champion Moose, and Chris Sabin of the Motor City Machine Guns in the main event. Hard to Kill also features a Knockouts Championship match, with Deonna Purrazzo defending against Taya Valkyrie, a Triple Threat for the X-Division Championship between Chris Bey, Rohit Raju, and champion Manik, as well as the finals of the Knockouts Tag Team Championship tournament, with Kiera Hogan and Tasha Steelz facing Havok and Neveah. In non-title competition at Hard to Kill, Eric Young, Joe Doering, and Deaner face Tommy Dreamer, Cousin Jake, and Rhino in an Old School Rules match, Eddie Edwards takes on Sami Callihan in Barbed Wire Massacre, Ethan Page faces The Karate Man (who is also Ethan Page), and Rosemary and Crazzy Steve take on Tenille Dashwood & Kaleb with a K. Finally, on the pre-show, Brian Myers faces Josh Alexander. Hard to Kill emanates as usual from Skyway Studios in Nashville and can be purchased on traditional PPV or on the Fite TV app.

It’s been a hell of a night so far. Impact has really upgraded the show tonight with the change in commentary and the fake crowd noise. It’s not the best crowd noise, but I think it does add something.

This is a really good match. A high point for the night so far. Raju is still looking to prove that Manik is TJP in this match, and to that end he does rip his mask off, but “Manik” is wearing face paint under it. Well of course, the FBI is looking for him for storming the capital, so he’s got to stay incognito. Some incredible wrestling from everyone involved here and “Manik” retains after pinning Rohit in the middle of some flashy chain wrestling.

Alisha Edwards expresses concern for Eddie in his match tonight. She wants to come to the ring and have his back. he asks if she’s gonna fight Old Man Shamrock. He says she needs to go home and stay safe because he might not make it home from this match. She promises not to go out to the ring. She’s gonna break that promise tonight.

Bleeding Cool’s live coverage of Impact Wrestling’s Hard to Kill PPV continues. Keep checking back for new articles as each match finishes. His Excellency, the esteemed El Presidente, is back for the next bout, so check back shortly for more.

This post is part of a multi-part series: Impact Hard to Kill 2021 Results.