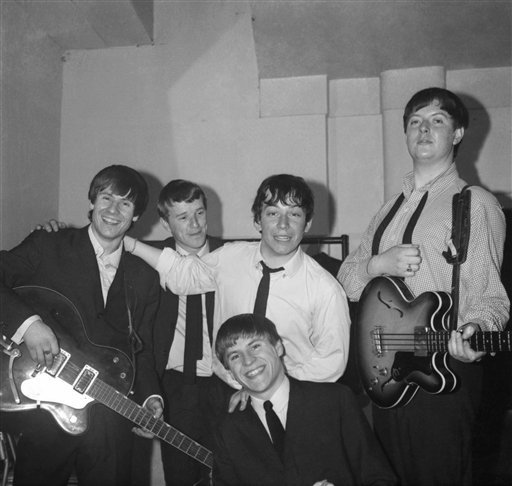 Guitarist Hilton Valentine, whose memorable opening riff on The Animals classic House of the Rising Sun propelled the song to No. 1 in the US, died Friday at age 77. No cause of death was given, according to a statement from his former record company, Abkco.

Valentine was a founding member of the British group The Animals. The group’s House of the Rising Sun hit No. 1 in 1964 in the U.K., US and Canada, and is listed among Rolling Stone’s Greatest Songs of All-Time.

Valentine’s other hits with The Animals include Don’t Let Me Be Misunderstood, It’s My Life and We Gotta Get Out of This Place, the latter particularly popular during the Vietnam War.

The group was inducted into the Rock and Roll Hall of Fame in 1994.

“We at Abkco have been privileged to serve as stewards of The Animals catalog and his passing is felt in a truly profound way by the entire Abkco family,” the record company statement said.

Valentine was born in North Shields, Northumberland, England. He began on the guitar at age 13, but was orphaned at age 16. He was part of the skiffle group The Heppers, which became The Wildcats, a band known for Valentine’s wild style – he was known to roll on the ground while playing his guitar.

That notoriety led him to the attention of Chas Chandler, Alan Price, and Eric Burdon who recruited him to join a new group they were forming in 1963. With the final addition of John Steel, they would become The Animals.

Valentine left the group in 1966, but rejoined for several reunions.

Valentine released a solo album in 1969 titled All in Your Head for Capitol Records. He reunited with The Animals three times and recorded Before We Were So Rudely Interrupted with the band in 1977, and again joined them in 1983.

In May 2001, he was inducted into Hollywood’s Rock Walk of Fame along with the other Animals and had a two-night reunion concert at the El Rey Theatre in Los Angeles.

In recent years, Valentine toured with the band Skiffledog that toured in the US and released two albums. He also joined Burdon, with whom he remained close, on tour in 2007-2008.

He is survived by his wife, Germaine Valentine. No memorial service information was available.