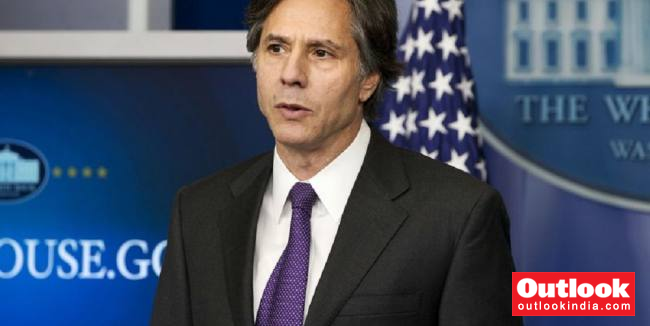 India and the US face a common challenge in the form of an “increasingly assertive” China and New Delhi has to be a key partner in engaging with Beijing from a position of strength, believes long-time national security and foreign policy expert Antony Blinken, who could be President-elect Joe Biden’s probable pick for the post of the Secretary of State.

Blinken made these comments during a community outreach programme with the Indian-Americans organised by the Biden campaign on the occasion of India’s Independence Day on August 15.

He alleged that US President Donald Trump has helped China advance key strategic goals by weakening American alliances, leaving a vacuum in the world for China to fill, and abandoning American values and giving Beijing a green light to trample on democracy in Hong Kong.

“We have a common challenge which is to deal with an increasingly assertive China across the board, including its aggression toward India at the Line of Actual Control, but also using its economic might to coerce others and … to its advantage, ignoring international rules to advance its own interests, asserting unfounded maritime and territorial claims that threaten a freedom of navigation in some of the most important seas in the world,” Blinken told the Indian-Americans during the virtual panel discussion on “US-India Relations and Indian Americans in Joe Biden Administration.”

India and China are engaged in a bitter stand-off on the Line of Actual Control (LAC) in Eastern Ladakh since May.

Blinken, who then was the top foreign policy advisor to former vice president Biden, had also referred to the Chinese actions in Hong Kong as repression of the rights of its own people and democracy in the former British colony.

“We have to sort of take a step back and start by putting ourselves in a position of strength from which to engage China so that the relationship moves forward more on our terms, not theirs,” Blinken had said.

“India has to be a key partner in that effort,” Blinken then said.

If Blinken is tapped by President-elect Biden and confirmed by the Senate Foreign Relations Committee, he would replace Mike Pompeo as the next Secretary of State.

“Unfortunately, right now by virtually every key metric. China’s strategic position is stronger and ours is weaker as a result of President Trump’s failed leadership,” he said.

More importantly, he alleged that Trump had undermined US democracy.

“In many ways, as we think about dealing with the challenges that China poses, it’s almost less about their strength and more about some of our self-inflicted weaknesses,” he said.

“Put another way, this is really about us in the first instance, the competitiveness of our own economy and workers. The strength of our own democracy and political system, the vibrancy of our own alliances and partnerships. And of course, the assertion of our own values, all of which President Trump has done so much to undermine,” Blinken said.

Relations between Washington and Beijing have spiralled downward since the outbreak of the novel coronavirus. The two countries have also sparred over trade issues, a new national security law in Hong Kong, restrictions on American journalists, treatment of Uyghurs Muslims and security measures in Tibet.

Responding to a question from Richard Verma, the former US Ambassador to India, who was moderating the panel discussion, Blinken said that Biden as President would be investing “in ourselves renewing our democracy, working with our close partners like India, asserting our values, and so engaging China from a position of strength.”

“During the Obama-Biden administration, we worked very hard to establish India as a key contributing member of the Indo-Pacific strategy. And that includes India’s role in working with like-minded partners to strengthen and uphold a rules-based order in the Indo Pacific, in which no country, including China, can threaten its neighbours with impunity,” Blinken said.

“That role needs to extend even beyond the region as vast as it is to the world at large. In a Biden administration, we would be an advocate for India to play a leading role in international institutions and that includes helping India get a seat on a reformed United Nations Security Council,” he said.

“We would work together to strengthen India’s defence, and also add its capabilities as a counterterrorism partner,” he added.

A Biden administration will also have no tolerance for terrorism in South Asia, he said in response to another question.

“On the question of terrorism, specifically, we have no tolerance for terrorism, in South Asia or anywhere else: cross border or otherwise,” he said.

Referring to a 2006 statement by Biden that by 2020, US and India should be closest friends, Blinken said that that has not happened yet, but Biden will make it a reality.

Former Assistant Secretary of State for South and Central Asia Nisha Desai Biswal was the other panelist at the event in August.