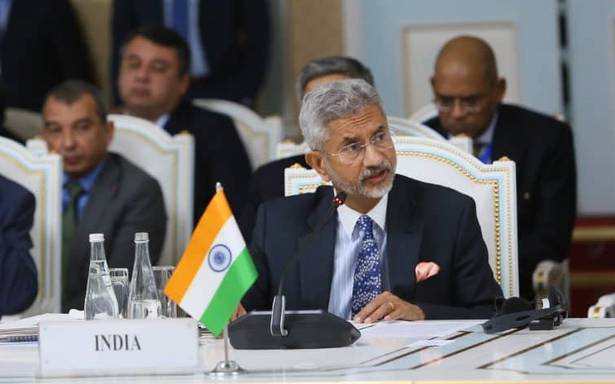 Calling for a “double peace” both inside Afghanistan and in the region, External Affairs Minister S. Jaishankar said India supports the Intra-Afghan Negotiations (IAN), in a rare direct reference to the Taliban at the 9th Heart of Asia conference in Tajikistan.

“India has been supportive of all the efforts being made to accelerate the dialogue between the Afghan government and the Taliban, including intra-Afghan negotiations,” the Minister said and referred to his participation in the inaugural virtual session of the Doha talks in September 2020.

“If the peace process is to be successful, then it is necessary to ensure that the negotiating parties continue to engage in good faith, with a serious commitment towards reaching a political solution,” he added. India has not in the past referred directly to the Taliban, and the government has not opened any public engagement with the militant group.

Mr. Jaishankar said India views the escalation in violence against civilians in and the “continued involvement of foreign fighters” in Afghanistan with “grave concern” and pushed for Heart of Asia members to ensure a permanent ceasefire.

Speaking at the same conference, Pakistan’s Foreign Minister Shah Mehmood Qureshi said Pakistan “fears that any space gained by ISIS and Al-Qaeda could accentuate the threat of terrorism,” and cautioned against the role of “spoilers”, both “within and outside Afghanistan”.

In a departure from the recent past, however, Mr. Jaishankar and Mr. Qureshi were present for each other’s speeches during the conference, unlike previous boycotts by the two sides at a number of conferences since 2019.

However, despite speculation over an ongoing India-Pakistan peace process and a back-channel dialogue, Mr. Jaishankar and Mr. Qureshi did not make any public contact during the day-long conference, and were seen avoiding eye contact during the joint photo opportunity they both participated in.

Speaking at the conference in Dushanbe, Afghanistan President Ashraf Ghani, who spoke to both foreign ministers in separate meetings, thanked neighbouring countries for their support. He also lauded a number of regional connectivity initiatives including India’s air corridor programme and Chabahar port project, as well as the Turkmenistan-Afghanistan-Pakistan-India (TAPI) pipeline.