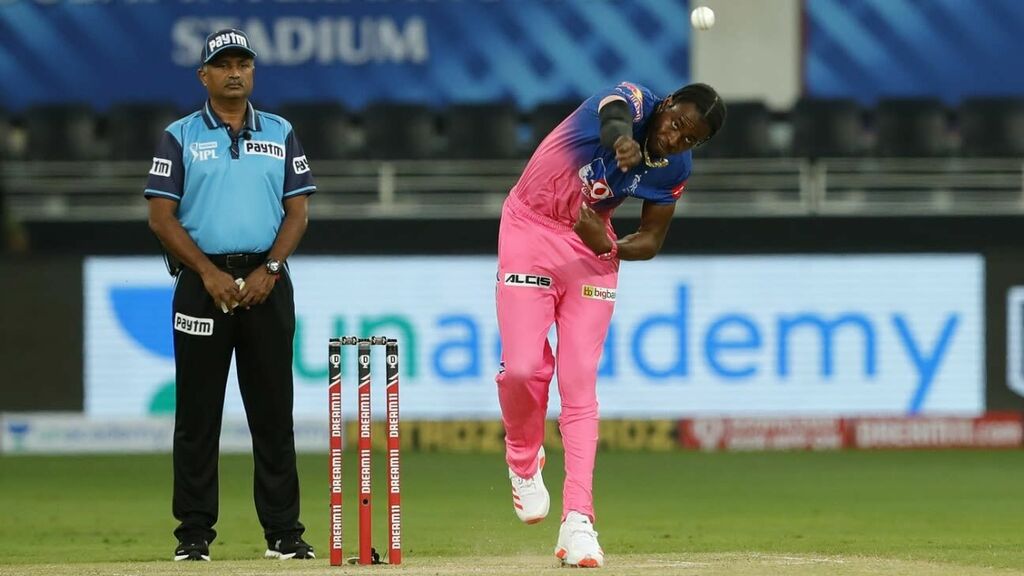 Following were Jofra Archer’s numbers for Rajasthan Royals (RR) in IPL 2020 played in UAE: 20 wickets from 14 innings with an economy rate of 6.55. If one studies player to team influence and impact, Archer will surely emerge as the most vital cog in RR’s wheels. He was the stand-out cricketer for a team that finished last in the points table.

RR was a team held back by an inconsistent batting unit and a bowling attack lacking depth in both spin and pace departments, especially within their Indian personnel. In such circumstances, Archer was often his team’s most dependable weapon under pressure. It was evident that opposition teams faced their toughest challenge against RR when Archer was operating from an end.

Archer was fantastic in the powerplay as well as the middle-overs for RR in IPL 2020. And though his death-over numbers belied his ability, he was still a threat whenever he turned up. Archer was pivotal to the six wins RR could manage through the league stage.

Jofra Archer to miss the start of IPL 2021

Thus, the news on Sunday (March 21) that Archer will return early from the ongoing India tour and miss at least half of IPL 2021 comes across as a massive blow to the inaugural season champions.

Much to RR’s dismay, Archer won’t be here but in the UK to go through further management and investigation of a longstanding elbow issue when they begin their campaign in the forthcoming edition of the IPL.

“Archer’s elbow issue has deteriorated and made it increasingly challenging for him to maintain performance levels. He has been deemed unfit for selection for the ODI series (against India),” said the England and Wales Cricket Board (ECB) in a statement.

“The ECB medical team will assess the player, develop a treatment plan and a return-to-play schedule in due course. As a consequence, Jofra will miss the start of this year’s Indian Premier League,” the board added.

With this being a persistent elbow injury issue, ESPNcricinfo reported that “Archer is going to be administered one more injection in his right elbow before being assessed by the ECB medical staff around mid-April, after which a call would be taken on whether he would return to India for the IPL or not.”

RR will hope that Archer is available to play the second half of the IPL but, given the extra deterioration of the injury, the team will also be best advised to look for potential replacements. At the recent auction in Chennai, the team did try to reduce the load on Archer’s shoulders by roping in Chris Morris and Mustafizur Rahman among their overseas fast-bowling contingent.

However, Archer’s absence still leaves a massive hole in the attack as it does little to ensure the team’s Indian fast-bowling isn’t exposed. None of RR’s Indian pacemen offered a four-over bank to them last year. It’s an area they tried to cover by bringing in Morris and have him potentially bowling in tandem with Archer. But with that option gone, would RR be willing to pair Mustafizur with Morris in the pace department?

Mustafizur, who hasn’t played a game of IPL for the last two seasons, is a big risk considering also the fact that batting units have gotten a greater understanding of his variations now. He isn’t as robust a paceman as Archer is, with his tall stature, express pace, and ability to nail the hard lengths at various stages of the game.

And so, Archer being unavailable leaves RR precariously placed going into the IPL 2021. It’s a massive, massive blow.