Home EntertainmentGossips Kareena Kapoor Khan styles up an oversized casual look with a neckpiece as she visits Karisma Kapoor; PHOTOS

Kareena Kapoor Khan styles up an oversized casual look with a neckpiece as she visits Karisma Kapoor; PHOTOS 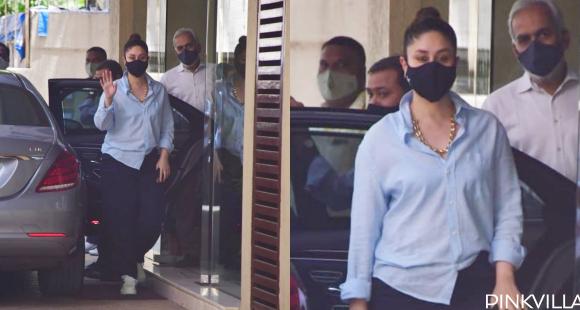 Kareena Kapoor Khan was snapped as she arrived at her sister Karisma Kapoor’s house. The gorgeous star kept it casual for a visit to her sister’s house and yet, managed to shell out style goals.

Kareena Kapoor Khan styles up an oversized casual look with a neckpiece as she visits Karisma Kapoor; PHOTOS

Actress Kareena Kapoor Khan has resumed work after welcoming her second son with Saif Ali Khan back in February and a couple of times has been papped in the city for it. On Friday, however, Kareena headed out to meet her sister Karisma Kapoor and while heading to her house, she was snapped by the paparazzi. Post her second delivery, Kareena had been spending time indoors with her newborn son and it was only a few days ago that she kicked off her workout regimen to get back into her previous shape.

Even amid all this, the new mommy never fails to keep it stylish and whenever she heads out, she makes heads turn. Today, as she was snapped at Karisma”s house, Kareena opted for a comfy and casual oversized look. In the photos, she was seen clad in a breezy blue oversized shirt. She teamed it up with black baggy pants and white sneakers. However, the most striking part of her look was her heavy gold neckpiece that stole all the attention.

The Laal Singh Chaddha star tied up her hair in a neat bun and was also seen sporting a black mask. The star stepped out of her car and posed for the paparazzi from a distance. Post this, she headed inside the building.

Take a look at Kareena’s photos: Meanwhile, on Friday, Kareena also sent lovely birthday wishes to her Singham Returns co-star Ajay Devgn on social media. The actress is back to work just a month after her second delivery. She shot for a celebrity cooking show in Mumbai recently. On the big screen, Kareena will be seen next in Laal Singh Chaddha with Aamir Khan. The film is helmed by Advait Chandan and is slated to be released on Christmas 2021.

Also Read|Kareena Kapoor Khan’s iconic PHAT dialogue from K3G gets a unique twist, all thanks to Priyanka Chopra; WATCH