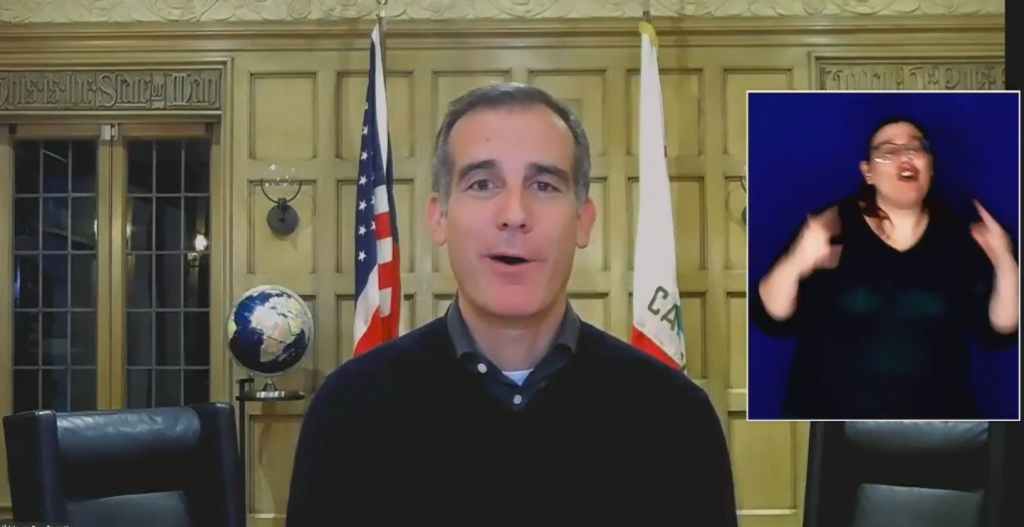 As many Angelenos are struggling to understand if they qualify for a Covid-19 vaccine — and then struggling to get one — Los Angeles Mayor Eric Garcetti received his first dose on January 21.

Garcetti, who turns 50 next week, does not seem to qualify under the current county health officer order, which specifies the current allotment of doses is for those over 65, healthcare workers, staff and residents at skilled nursing facilities and longterm care facilities.

A spokesman for the mayor, Alex Comisar, said, “Mayor Garcetti has spent many days, as he is today, at Dodger Stadium, assisting on the frontline of the vaccination effort, directly interacting with hundreds of Angelenos each day.

“The medical personnel strongly recommended that he receive the vaccine as they have recommended and provided for other field staff and volunteers at the site who have close contact with clients.”

While that may be sound medical advice, it may not turn out to be so politically. Getting the vaccine while many who are officially qualified struggle to get it may be seen as jumping the line. California Governor Gavin Newson cited exactly that calculation when asked why he has not been vaccinated.

Local health officials — and Garcetti himself — have repeatedly complained about the low number of doses being delivered to the nation’s most populous county. They have estimated that, at this pace, the current phase of vaccinations will take until at least mid-March to complete.

While President Joe Biden announced a plan this week to increase output by 50%, Dr. Simon estimated that the county would need 500,000 doses each week to have 75% of LA county vaccinated by mid-summer. That could be enough to create herd immunity.

RELATED:  Cheating or infidelity is unforgettable, but is it unforgivable? Celebs share their view