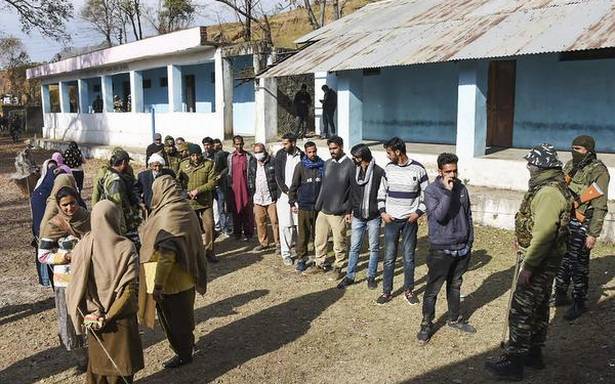 Three top Peoples Democratic Party (PDP) leaders, who form the core group of party chief Mehbooba Mufti, were detained in Kashmir, just a day ahead of the results of the maiden District Development Council (DDC) polls.

An official said two south Kashmir-based leaders were detained in the morning and shifted to a police station in Anantnag’s Bijbehara town, also the hometown of PDP president Mehbooba Mufti.

“One leader was arrested when was heading for Srinagar from Anantnag,” a police official said.

They have been identified as Sartaj Madani, uncle of Ms. Mufti and also ex-deputy speaker of the assembly, and Peer Mansoor Hussain, a former legislator.

In a separate raid, a police party arrested former minister Naeem Akhtar around 9:45 p.m. “The police came knocking on our door. My father was detained at the unearthly hour. There was no order or government instruction shown to us. We don’t know the ground of detention or the duration. I cannot relive through the horror of last year but will stand by him always,” Akhtar’s daughter Shehryar Khanum said.

The police have neither confirmed nor denied these detentions. The police have spelt no reasons or details of the case in which the arrests were made.

However, sources said the central investigating agencies have been investigating funding and transactions made during the regime of Ms. Mufti as a chief minister. The duo being questioned in a police station located in the hometown of Ms. Mufti indicated that the case might be involving Ms. Mufti herself.

Meanwhile, Ms. Mufti termed the arrests as “total lawlessness”. “Mr. Madni and Mr. Hussain have been arbitrarily detained today on the eve of DDC election results. Every senior police officer here is clueless as it is  ‘upar say order’. No rule of law in J&K anymore. It is out and out Gunda Raj,” Ms. Mufti tweeted.

She alleged that the J&K administration is on an arrest spree and “Mr. Akhtar has been abducted by the J&K police”. “It looks like the BJP is planning to manipulate the DDC results tomorrow and don’t want any resistance. Democracy is being murdered in J&K,” she tweeted.

“The detentions have come just a day before the results of district development council (DDC) polls, which is sheer political vendetta. The rule of law is being flouted with impunity in J&K,” Mr. Malik said.

Meanwhile, several leaders of the National Conference, in a joint statement, described the measure of attaching the properties of party president Dr. Farooq Abdullah by the Enforcement Directorate “political vendetta”.

“The measure is coercive. It’s symbolic of the repugnance, which the ruling BJP nurtures for opposition leaders. There was no evidence worth the name on the record to justify the order of the attachment of the property.  It is nothing except political vendetta and an attempt to silence the leadership and dissuade it from voicing support to the political aspirations of the people of Jammu, Kashmir and Ladakh,” the statement reads.