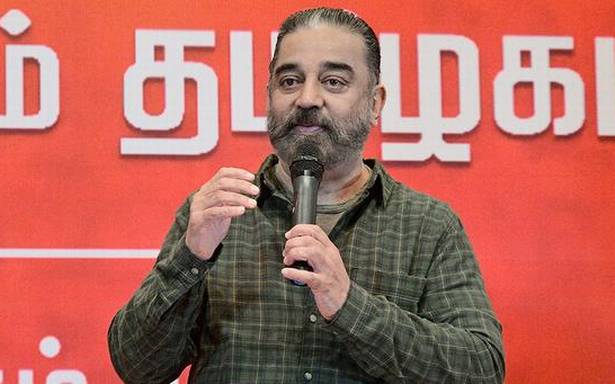 Makkal Needhi Maiam founder Kamal Haasan on Sunday defended his earlier statement that he is former Chief Minister M.G. Ramachandran’s political heir, as he embarked on the second phase of his election campaign in Injambakkam, Porur, Poonamallee and Sriperumbudur outside Chennai.

Speaking near the Porur signal, he said Porur had been urbanised, but infrastructure had not been upgraded.

“The quality of life has not grown as much as the real estate rates in the area. The Chennai Port-Maduravoyal Expressway has not been built for the last 10 years. The situation can be changed if honest people are voted to power, instead of criminals,” he said.

Mr. Haasan said he was not suddenly claiming MGR’s legacy. “They ask why I have been speaking about MGR only before the election. They have been deaf and blind. Our first slogan was ‘Naalai Namadhey’. We are not a party to keep repeating his name to make money,” he said.

He added, “We will speak of Gandhi, MGR, Periyar and Ambedkar. We want their good intentions to become ours. Those who want good things for people are MGR’s heirs. His legacy is not a waste land to sell.”

Earlier, he met around 400 residents of East Coast Road, who were protesting against a storm-water drain (SWD) project being implemented by the Greater Chennai Corporation (GCC).

Addressing the residents at Injambakkam, he said his party wanted to protect the environment and reverse the damage done over the decades to waterbodies. “When I went for film shootings as a child and wanted to go boating in a lake near Kodambakkam, I was told I could do so after I grew up since I couldn’t swim. That lake has vanished…,” he said.

R. Balakrishnan, treasurer, VGP Golden Seaview Residents Welfare Association, said, “We don’t want the project since it would spoil the underground aquifer that provides water to many areas in the city. The sandy soil in our area already does the job of recharging the groundwater table and absorbing rainwater effectively.”