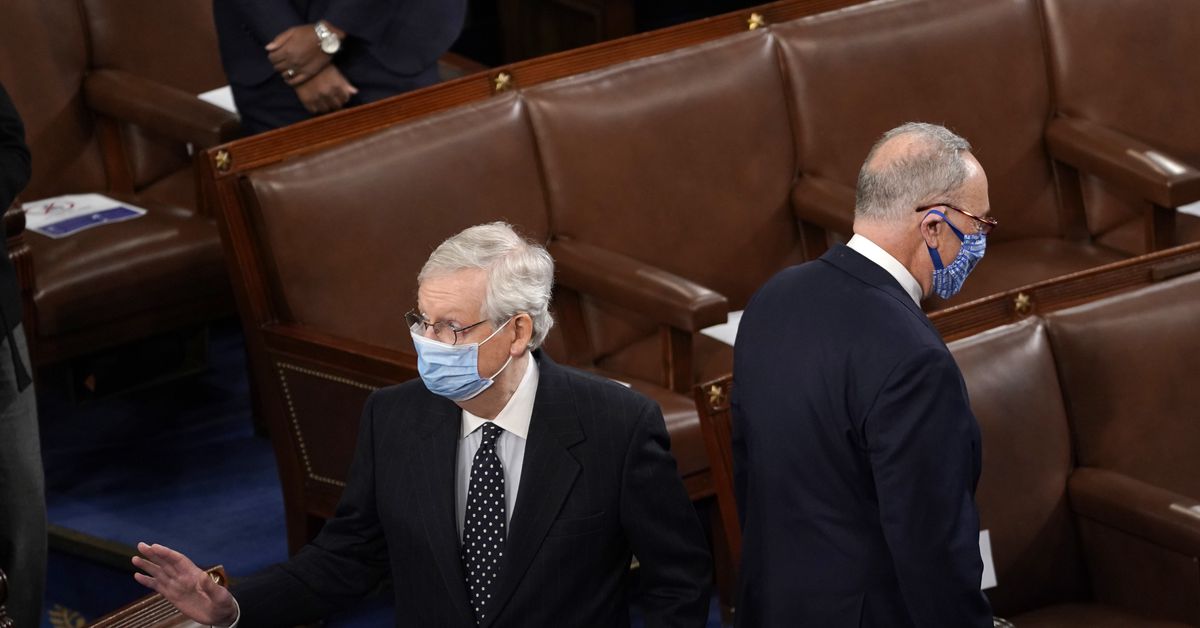 A fight over the Senate organizing resolution has put questions about the legislative filibuster front and center.

At the moment, Senate Majority Leader Chuck Schumer and Minority Leader Mitch McConnell are still negotiating what this organizing resolution — which establishes committee memberships and funding allocations for both parties — will include.

An ongoing disagreement between the two lawmakers has centered on the legislative filibuster, which effectively requires most bills to hit a 60-vote threshold in order to pass.

McConnell has demanded that Democrats commit to keeping the filibuster around as part of this resolution. But Schumer has refused to acquiesce to this request because doing so would unnecessarily limit the procedural options that Democrats, who only have a slight majority with Vice President Kamala Harris’s vote, have moving forward. Refusing to commit now will also allow Democrats to use threats of ending the filibuster as leverage in future negotiations. (A promise to protect the filibuster in the resolution would not necessarily prevent Democrats from eliminating it, but it’s a way to have them on the record on the subject if they decide to change the rules in the future.)

“All I can tell you is we are not letting McConnell dictate how the Senate operates. He is minority leader,” Schumer recently told reporters.

By withholding backing for the measure unless his demands are met, McConnell is preventing the Senate from setting up the infrastructure it needs to function, since the resolution requires Republican support to pass. Schumer, meanwhile, has pushed for a resolution similar to the one approved by Sens. Tom Daschle and Trent Lott in 2001, the last time the Senate had a 50-50 breakdown. That measure did not address the issue of the filibuster, which McConnell argues needs to be included this time around to preserve the rights of the minority party in the Senate.

In holding up the organizing resolution, McConnell is causing some annoying delays. Without the passage of this measure, Democrats are unable to formally take over committee chair positions, and new members have yet to be seated in committees. Republicans also retain the ability to oversee consideration of nominees and other policy priorities, a dynamic that could slow the progress of President Joe Biden’s legislative agenda. In many ways — at least for the time being — McConnell’s refusal to budge gives the minority party some residual control of the Senate.

McConnell’s request has also compelled some Democratic lawmakers including Sens. Joe Manchin (D-WV) and Kyrsten Sinema (D-AZ) to reaffirm their commitment to the filibuster — underscoring ongoing Democratic divides on the issue. “She is not open to changing her mind about eliminating the filibuster,” a Sinema spokesperson told the Washington Post on Monday. Manchin echoed this stance in an interview with Politico: “If I haven’t said it very plain, maybe Sen. McConnell hasn’t understood, I want to basically say it for you. That I will not vote in this Congress, that’s two years, right?” Because a change to the filibuster would require all 50 members of the Democratic caucus to be on board, Sinema and Manchin’s statements provide McConnell with a guarantee if they maintain these positions.

Democrats’ next steps will depend heavily on whether McConnell keeps up his push amid these recent statements and the growing pressure from lawmakers who are frustrated by their inability to fully govern. McConnell on Monday told Punchbowl News that the two leaders were “getting close.”

Depending on how long this impasse continues, and how incensed lawmakers are by McConnell’s obstruction, Democrats could opt to eliminate the filibuster specifically for the organizing resolution. Such a move would open the door for potential rule changes down the line, including more sweeping ones.

Senate Democrats could blow up the filibuster — in a narrow way

There are a couple different ways this stalemate could end: McConnell could concede and drop his request, Schumer could cave and offer a statement signaling Democrats’ commitment to maintaining the filibuster, or Democrats could try to pass the organizing resolution with a simple majority vote. Neither McConnell nor Schumer has signaled that they intend to give in yet.

To pass it with a simple majority, or 51 votes — including Vice President Kamala Harris as a tiebreaker — Democrats would need to alter the rules and eliminate the filibuster, a change they could apply solely to the resolution. By ending the filibuster just for organizing resolutions, they’d be able to advance this measure with the support of only the Democratic caucus, but they wouldn’t be getting rid of the legislative filibuster completely.

“There could be a narrow nuking of the filibuster,” says Josh Huder, a senior fellow at the Government Affairs Institute. And there is some precedent for a tailored alteration of the filibuster rules: In another instance in 2013, Democrats eliminated the filibuster for the majority of presidential nominees, but did not do so for Supreme Court nominees.

Part of the motivation for taking this step could be growing frustration over how the organizing resolution is holding up progress in the Senate. Since the heads of committees haven’t been able to formally claim their chair roles, they haven’t been able to move forward with the types of hearings and policy markups they’d like to pursue. Manchin, for instance, is in line to become chair of the energy and natural resources committee, but hasn’t yet been able to fully take up that mantle. Before any of the Democrats’ agenda items can come to the Senate floor, they have to go through these committees — and Republican heads have shown little interest in expediting Democratic priorities.

Those against such changes warn that Democrats may not always be in the majority, and a future Republican majority could then organize in some way they find objectionable. This move could also set up a slippery slope toward eliminating the legislative filibuster entirely in the future, since it requires all members of the 50-person caucus to be on board. Once moderate Democrats publicly opposed to filibuster changes were to vote for this alteration, they would face pressure to do so again.

“That would be a very large crack in an already broke dam,” says Huder.

It’s worth noting, though, that this scenario would mark a significant step for Democrats, several of whom have otherwise been firm in their opposition to changes to the legislative filibuster. As such, there’s a strong possibility lawmakers stop short of going this far.

In the previous 50-50 Congress, Daschle told Vox that he and Lott were ultimately able to come to an agreement, despite pushback from Republicans who claimed it gave Democrats too much power. He notes that passage could be more challenging now given the present environment of increased partisanship.

This debate has reaffirmed Democratic divides over the filibuster

At the moment, there’s not only a chasm between Republicans and Democrats on the filibuster, but a divide among the Democratic caucus as well.

The Democratic caucus, which includes 48 Democrats and two independents, is not currently united on plans to eliminate the legislative filibuster — and the ongoing spotlight on the issue has underscored this split.

While Manchin and Sinema have directly rejected changes to the filibuster, other lawmakers including Sens. Dianne Feinstein (D-CA) have stated their wariness in the past as well. On the other hand, more progressive senators, like Sens. Elizabeth Warren (D-MA) and Ed Markey (D-MA), have argued for abolishing the rule.

Ultimately, keeping it is likely to make passing any sweeping legislation difficult, as Democrats would need every member of the caucus plus 10 Republicans to do so. And some lawmakers, including those who have been hesitant to change the rules, have acknowledged this.

A statement that Sen. Jon Tester (D-MT) gave to the New York Times sums up how Democrats may be considering more drastic action if McConnell maintains ongoing obstruction to Biden’s agenda.

“If all that happens is filibuster after filibuster, roadblock after roadblock, then my opinion may change,” said Tester, who is currently in favor of keeping the filibuster.

In the long term, abolishing the filibuster would radically alter how the Senate does business and make it far easier for the majority to advance its agenda. In the short term, too, it would significantly change the chamber’s dynamic: If the legislative filibuster were broadly eliminated, moderate senators like Manchin and Sinema would become the key votes on any bills that were contentious, giving them significant influence within the caucus, while also ramping up the pressure they face for each of these votes.

The organizing resolution could well be the first test of how willing Democrats are to change Senate rules for their immediate gain — and a preview of how the caucus will respond to McConnell’s procedural obstruction.

Back to Top
Close Add post
X
How Biden Is Erasing Trump’s White Supremacist Legacy…WorldOn his first day in office, President Joe Biden moved to both erase the white supremacist legacy of the previous White House and address injustices th…