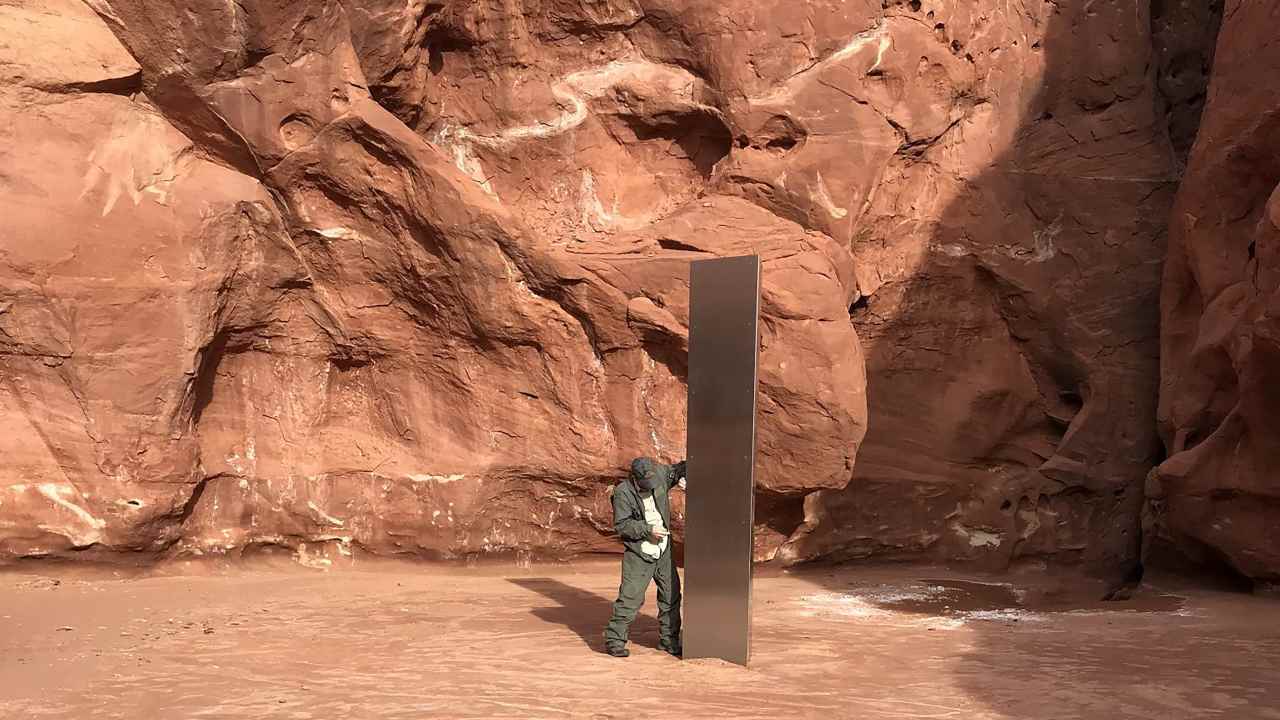 A mysterious metal “https://www.firstpost.com/tech/science/obelisk” found buried in the remote western United States desert has inflamed the imaginations of UFO spotters, conspiracy theorists and Stanley Kubrick fans around the world.

The shiny, triangular pillar – which protrudes approximately 12 feet from the red rocks of southern Utah – was spotted last Wednesday by baffled local officials counting bighorn sheep from the air.

Landing to investigate, Utah Department of Public Safety crew members found “a metal monolith installed in the ground” but “no obvious indication of who might have put the monolith there.”

“It is illegal to install structures or art without authorization on federally managed public lands, no matter what planet you’re from,” warned the agency in a tongue-in-cheek press release Monday.

News of the discovery quickly went viral online, with many noting the object’s similarity with strange alien monoliths that trigger huge leaps in human progress in Kubrick’s classic sci-fi “2001: A Space Odyssey.”

Others remarked on its discovery during a turbulent year that has seen the world gripped by the Covid-19 pandemic, and optimistically speculated it could have a different function entirely.

“This is the ‘reset’ button for 2020. Can someone please press it quickly?” joked one Instagram user.

“Up close it reads: ‘Covid vaccine inside'” wrote another.

With officials refusing to disclose the object’s location out of fear that hordes of curious sightseers would flock to the remote wilderness, a race has also begun online to geo-locate the “https://www.firstpost.com/tech/science/obelisk” using surrounding rock formations.

The metallic monolith juts out prominently in the Utah desert. AP

Bret Hutchings, the pilot who happened to fly over the obelisk, speculated that the obelisk had been planted by “some new wave artist.”

Some observers pointed out the object’s resemblance to the avant-garde work of John McCracken, a US artist who lived for a time in nearby New Mexico, and died in 2011.

On Tuesday a spokeswoman for his representative David Zwirner said it was not one of McCracken’s works, but possibly by a fellow artist paying homage.

However later in the day Zwirner gave another statement in which he suggested the piece was indeed by McCracken, meaning it had lain undiscovered in the desert for nearly a decade.

“The gallery is divided on this,” Zwirner said. “I believe this is definitely by John.”

He added: “Who would have known that 2020 had yet another surprise for us. Just when we thought we had seen it all. Let’s go see it.”

Either way, Hutchings admitted it was “about the strangest thing I’ve come across out there, in all my years of flying.”

“We were kind of joking around that if one of us suddenly disappears, then the rest of us make a run for it,” he told local news channel KSLTV.