Home General Mercedes-AMG ONE: An F1 car for the streets 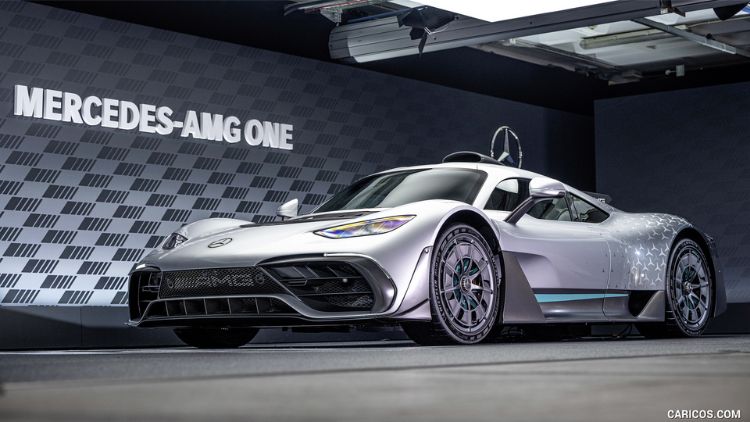 The new Mercedes AMG ONE is a Formula one car for the road. It was first shown back in 2017 as a concept but it’s taken five years to finally produce the production version. A delay because of Covid. And not only that, but because a lot of this car on the powertrain is built in a Formula one facility in the United Kingdom.

The design of this car is really quite incredible. You’ve got massive air vents at the front. The air is channeled in and then separated using the section on the bonnet. So air goes down the side of the car, the middle of the car then exactly down the middle into the scoop in the roof. So they’re separating the air out to maximize the aero and. There is no normal Mercedes badge on the front. It’s sprayed on like on a formula one car because you don’t want drag from a badge.

Wheels are 19 inches at the front and 20 at the back. They’re forged Magnesium so they’re strong and lightweight. At the sides is exposed carbon fiber just like on the formula one car. There are ducts so that air that has come over the top has been separated and some of it goes into the oil cooler to help cool the engine and the gearbox. Around the back we’ve got a big rear diffuser for downforce. Huge central exhaust pipe like on a formula one car and you’ve got some extra little pipes there as well. The shark fin aids stability at high speed.

The coolest thing about this car is that you can put the car from “road mode” into “track mode” for maximum downforce. In track mode, the car sinks by 30 millimeters. The vents over the wheel arches open up to allow airflow out of there. The huge spoiler at the back pops up for massive amounts of downforce. You also have a DRS mode and it’ll move in to reduce the drag. same with the air vents at the front to help you slip through the air and get your maximum top speed. There is a dedicated DRS button on the steering wheel of the car just like an F1 car.

The insides of the AMG ONE feel sporty. There’s a  Formula one style steering wheel with various buttons on it. Things like DRS, suspension and stuff like that. There’s a dial for different driving modes. A big digital driver’s display and the normal Mercedes infotainment system. You don’t move your seat in this car because they want to keep the driver in the optimal position for balance. Instead you move the pedal box by pushing it exactly where you want it.

The seats themselves are really lovely which really grips you very well which is important in the car with this kind of performance. Carbon fiber is absolutely everywhere on the inside as well. You’ve got a rear view camera because you can’t see out by looking behind. If you want to get out, there’s a big open lever there so you pull that then you just push the door up and then exit in style.

Just like Mercedes AMG’s F1 car, the AMG ONE is powered by a 1.6 liter V6 Turbo petrol engine with Hybrid Technology. The turbo charger is also mated to a 122 horsepower electric motor which allows you to spin up the turbocharger to 100,000 revolutions per minute so that you have no turbo lag. The engine is mounted to an eight-speed automatic gearbox. It’s a sequential gearbox and it drives the rear wheels. The total system output of the entire car is 1063 horsepower. Mercedes AMG says that this car will do 100 kilometers in 2.9 seconds and  200 kilometers in 7 seconds.

The AMG ONE is a plug-in hybrid. so you can just plug it into a normal wall box and charge it. It has an eight kilowatt hour battery.. That will give a range of around 18 kilometers on electric power. When it’s running on electric power it is only front wheel drive. However, it can get speeds of over 200 kilometers an hour.

Formula 1 technology does not come for cheap. The AMG ONE costs 2 million pounds. It’s irrelevant since all 275 of them have been sold.