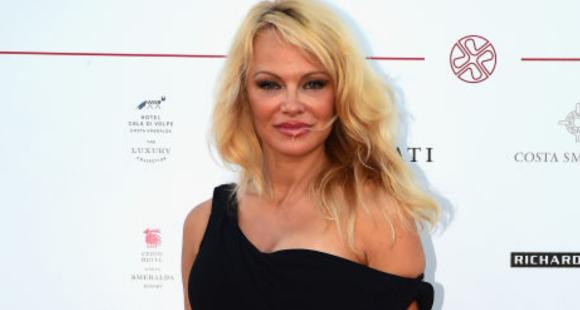 Pamela Anderson got married on Christmas eve in 2020 and in a private ceremony at her Vancouver Island home in Canada.

Pamela Anderson says ‘I Do’ for the fifth time as she married bodyguard Dan Hayhurst on Christmas Eve.

Baywatch star Pamela Anderson walked down the aisle and said “I Do’ for the fifth time as she married her bodyguard Dan Hayhurst. Pamela’s wedding news was shared by RASTA Sanctuary on Instagram. The sanctuary is run for rescue animals in Vancouver, Canada, and is owned by Pamela Anderson. The model and actress got married on Christmas eve in 2020 and in a private ceremony at her Vancouver Island home in Canada.

As per reports, there was no family and friends in attendance but the couple said ‘I Do’ to each other in front of a witness and a local pastor. Sharing the big news on Instagram, Rasta Sanctuary’s post read, “Please help us in congratulating our wonderful friends Pamela Anderson and Dan Hayhurst on their wedding! These two lovebirds recently tied the knot on Christmas Eve and we truly couldn’t be happier for them!”

In the post, several photos of Dan and Pamela were shared in which the actress can be seen wearing a stunning corset ensemble. Check it out below:

Anderson told Daily Mail, “I was married on the property I bought from my grandparents 25 years ago. This is where my parents were married and they are still together. I feel like I’ve come full circle. I think this romantic property has a lot of healing energy. I’m at peace here. It’s a big property but a few people passing by could see the fairytale gown with the long Princess Diana veil dragging in the mud. Heaven.”

The actress was previously married to musicians Tommy Lee, Kid Rock, poker player Rick Salomon (twice) and in January 2020, Pamela married producer Jon Peters. However, Jon and Pamela split days later and she added that they had not been legally married.