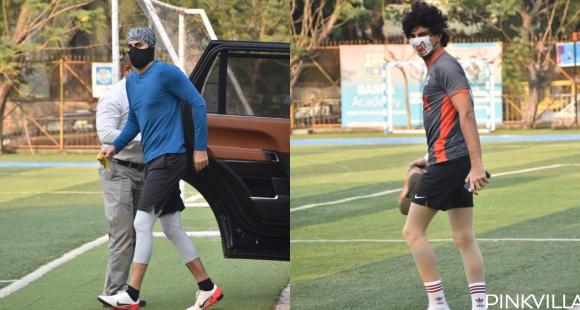 Ranbir Kapoor, Ibrahim Ali Khan, Aparshakti Khurrana stepped out in the city to play football. They are ardent lover of the game.

Ranbir Kapoor’s love of football is no hidden truth. The actor”s favourite football team is Barcelona and he is a self-proclaimed Lionel Messi fan. Ranbir Kapoor is often spotted playing friendly matches with his friends at various football grounds in the city. The actor likes to spend his Sundays playing his favourite sport. Today to join him was Ibrahim Ali Khan and actor Aparshakti Khurrana. All were spotted in the city. Ibrahim Ali Khan, Aparshakti Khurrana is often seen playing football.

The shutterbugs saw Ranbir Kapoor dressed in a blue T-Shirt while Ibrahim Ali Khan was seen in a grey coloured T-shirt. Aparshakti Khurrana opted for black. All waved to the shutterbugs and welcomed them. Ranbir Kapoor, who is already making headlines with his girlfriend Alia Bhatt, was spotted for the first time after his Rajiv Kapoor passed away. Rajiv Kapoor passed away due to a massive heart attack. The veteran actor was also a popular Bollywood actor and was known for his film Ram Terii Ganga Maili.

Apart from this Ibrahim Ali Khan and actor Aparshakti Khurrana are constant buddies for football. They also love playing the game.

Take a look at their pictures here: Meanwhile, Ranbir Kapoor was last in New Delhi shooting for his next film Luv Ranjan. He was also accompanied by his lady love Alia Bhatt.  They will be seen together in Brahmastra. Recently, Alia and Ranbir were spotted arriving at the old Dharma Productions office this afternoon. The couple was seen heading inside the building after acknowledging the paparazzi from a distance.