PHOTOS: Sara Ali Khan sips on her coffee as she exits the gym; Ananya Panday waves to paps in the city 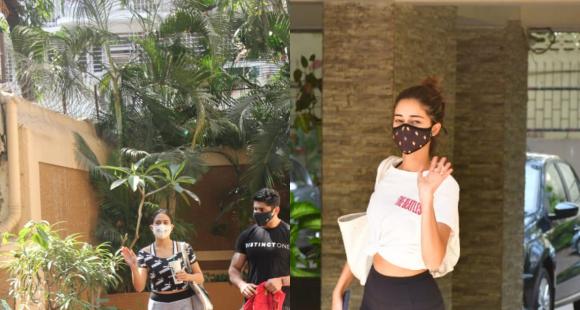 Sara Ali Khan started off the week on a healthy note by hitting the gym and was papped post her workout session. Ananya on the other hand was also spotted as she stepped out in her casuals. Check out the pictures below.

PHOTOS: Sara Ali Khan sips on her coffee as she exits the gym; Ananya Panday waves to paps in the city

Sara Ali Khan and Ananya Panday, two of the most popular star kids in Bollywood, are among the promising actresses that we have in our film industry. Both the beautiful damsels have managed to prove their mettle as talented stars and are loved by the masses thanks to their stellar performances in films. The Simmba star and the Student of the Year 2 actress are often papped in the city. Known for her dedication towards fitness, Sara Ali Khan has kicked off the week on a healthy note as she was spotted post exiting the gym.

Ananya, on the other hand, was papped by photographers as she goes out and about in the city. Both the young starlets were at their casual best. In the pictures, we can see the Coolie No 1 actress wearing a chic black crop top with grey shorts. She teamed up her sporty look with black sneakers. Sara can also be seen holding a cup of coffee as she makes her way out of the gym. The Khaali Peeli star also looked fit in a white top and black shorts with white shoes. She happily posed for paps and was seen waving at them. In the photos, Ananya can also be seen carrying her water bottle and white bag. Both Sara and Ananya tied their hair in a neat bun and looked simple yet stylish.

Check out their pictures below: On the work front, Ananya will next be seen with Deepika Padukone and Siddhant Chaturvedi in Shakun Batra”s upcoming untitled film. She also has Puri Jagannadh’s Liger with Vijay Deverakonda in her kitty.

Talking about Sara, the Kedarnath actress is done shooting for Aanand L. Rai’s romantic drama Atrangi Re with Dhanush and Akshay Kumar.

Ananya Panday poses with a dog for Dabboo Ratnani Calendar 2021