Home EntertainmentGossips PHOTOS: Varun Dhawan sweats in gym as he gears up to get back in shape post his wedding with Natasha Dalal

PHOTOS: Varun Dhawan sweats in gym as he gears up to get back in shape post his wedding with Natasha Dalal 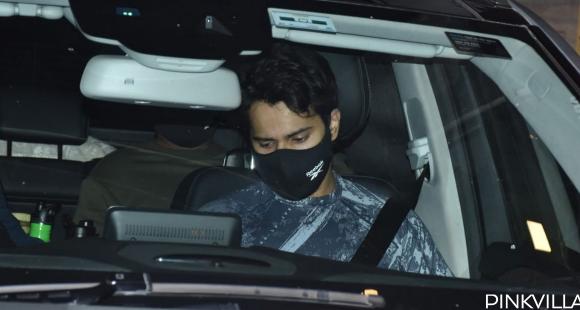 Varun Dhawan broke a million of hearts when he married his longtime girlfriend Natasha Dalal on January 24 this year and looks like he is back to his usual routine now.

PHOTOS: Varun Dhawan sweats in gym as he gears up to get back in shape post his wedding with Natasha Dalal

Varun Dhawan has been making the headlines ever since he married his lady love Natasha Dalal. The wedding was a private affair which took place in Alibaug in presence of their family members and close friends on January 24 this year. Post the wedding rituals, the newlyweds were also seen heading back to Mumbai hands in hands on a jetty and together they were a sight to behold. And while the wedding ceremonies are over now, the Student of the Year actor is back to his normal routine.

The handsome hunk was recently spotted post a rigorous workout and it appeared like Varun is shedding the extra kilos, he might have gained during the wedding ceremonies. In the pics, the Humpty Sharma Ki Dulhania actor was spotted wearing a sweatshirt in hues of blue along with dark blue coloured track pants and a pair of matching sneakers. While Varun was wearing a mask, he made sure to wave at the shutterbugs as he made his way to his cars while his fans tried to get a glimpse of it.

Take a look at Varun Dhawan’s pics post a workout:

Meanwhile, speaking about Varun and Natasha’s wedding, it was a three day affair in Alibaug which started with Humpty Sharma Ki Dulhania actor’s bachelor party. There were reports that the couple will be hosting a grand reception this week in Mumbai from their friends from the industry. However, the speculations were quashed by Varun’s uncle Anil Dhawan. Meanwhile, rumours are abuzz that the newlyweds will be flying to Turkey for their honeymoon.

Also Read: PHOTOS: Varun Dhawan spends Sunday afternoon in the gym as he gets snapped by the paparazzi