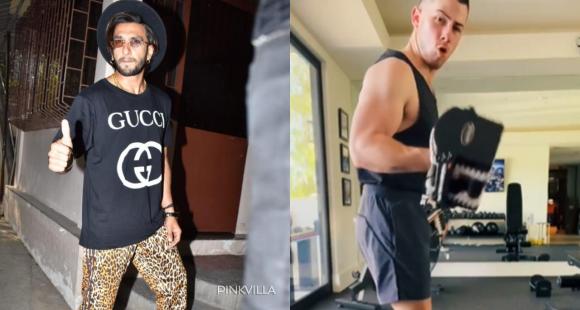 Nick Jonas recently dropped a video on his social media handle where he was seen working out at the gym. Ranveer Singh could not resist dropping a comment on the Jonas Brothers singer’s video.

Ranveer Singh is among the celebs who often shell out workout inspiration by sharing gym selfies and videos on social media. However, this time, it is Ranveer who is impressed by International sensation, Nick Jonas” workout video. The Bajirao Mastani star shares a great friendship with Priyanka Chopra Jonas and often has dropped comments on her and Nick’s photos and videos in the past. This time, he opted to drop a cheeky comment on Nick’s workout video and left netizens amused.

Taking to his Instagram handle, Nick shared a video in which he is seen sweating it out and lifting weights at the gym. With a song playing in the background, Nick is seen working out dedicatedly. Seeing Nick sweating it out, Ranveer could not resist and he dropped a cute comment in which he called the Jonas Brothers singer, ‘Jiju.’ Further, he hyped him up as the singer worked on building his muscles with weightlifting exercise. Nick shared the video and wrote, “Let’s get it!”

Seeing Nick sweat it out with dumb bells, several fans were in awe. However, Ranveer’s comment stole the show. He wrote, “Oho! Jiju! Dolle-Sholle,” with a bicep emoticon. Meanwhile, Ranveer and Priyanka often indulge in Instagram banter and whenever they do, fans have a field day on social media. However, this time, it is Nick who managed to grab Ranveer’s attention. On the work front, Ranveer is currently shooting for his project with Rohit Shetty. Besides this, he will be seen in Jayeshbhai Jordaar. The film is helmed by Divyang Thakkar and produced by Yash Raj Films and Maneesh Sharma.