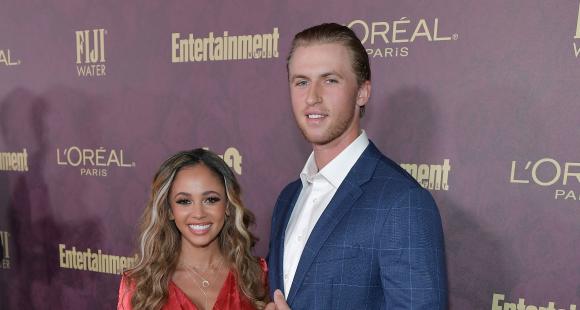 Vanessa Morgan and Michael Kopech recently welcomed a baby boy after announcing earlier in 2020 that the duo was parting ways.

Riverdale star Vanessa Morgan is finally a mom! The 28-year-old actress recently gave birth to a healthy baby boy with her estranged husband Michael Kopech, E! News confirmed. “Vanessa had the baby, and Michael is with her as well,” a source revealed. “They’re both thrilled,” the insider added. While right now it is unclear when Vanessa gave birth and if the duo ahs named the baby yet, but stay tuned for updates.

Vanessa first announced back in July 2020 that she was pregnant with her first child. Just three days later, Vanessa and Michael shocked fans when it was revealed that Michael had filed for divorce a month earlier. Vanessa and Michael married in an intimate ceremony in Florida back in January 2020, their break up was announced in June 2020.

Kopech, 24, filed for divorce in his home state of Texas on June 19, reported by The Chicago Tribune. A representative for Morgan confirmed to People magazine that Kopech is the father of Morgan”s baby on the way, but declined to comment on the divorce filing. News of the divorce came just days after Morgan, 28, announced her pregnancy. The actress shared photos and videos from a party of close friends and family on Instagram, where it was revealed that she’s having a baby boy. Kopech did not appear in any of the pictures or videos. “Was debating keeping this part of my life hidden but I knew people would see pictures eventually with my belly & I wanted you guys to hear it from me,” she began the caption. “I do want to keep this chapter of my life private but did want to be the first to share the news.” “I am overjoyed to be welcoming my baby boy into the world this January,” Morgan continued. “It’s almost like everything I thought mattered in this life has completely changed. We’re here for such a greater purpose and life is so precious.”