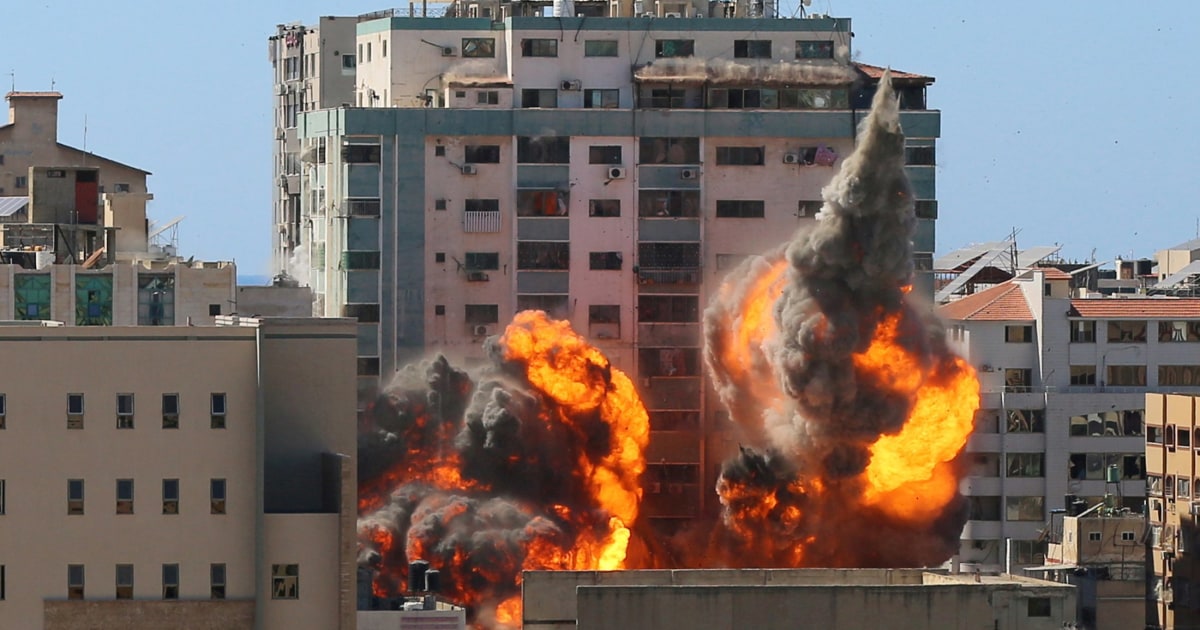 Press freedom advocates have condemned Saturday’s Israeli airstrike on a Gaza building that housed offices of foreign media, including The Associated Press and Al-Jazeera.

After it was struck by missiles, the 12-story al-Jalaa tower, which was also home to apartments and other offices, collapsed in giant cloud of dust, disrupting coverage of the ongoing conflict between Israel and Hamas militants in the Gaza Strip that has escalated last week, claiming dozens of lives.

There were no immediate reports of injuries or deaths, and journalists and other tenants were safely evacuated after the Israeli military gave an advance warning of an imminent strike.

In a personal account of the evacuation, AP correspondent Fares Akram wrote that it was “one of the most horrible scenes I have ever witnessed.”

The top floor offices and roof terrace on the now-destroyed building had provided a prime location for the Associated Press’s coverage of fighting in Gaza, including 24-hour live shots of the territory.

Gary Pruitt, the president and CEO of the Associated Press — one of the world’s largest news agencies, based in New York — said in a statement on Saturday he was “shocked and horrified” by the strike.

“The world will know less about what is happening in Gaza because of what happened today,” he added.

Secretary of State Antony Blinken spoke with Pruitt after the building was destroyed, offering his “unwavering support for independent journalists and media organizations around the world,” the State Department said in a statement.

White House spokesperson Jen Psaki also said in a tweet that the U.S. has communicated directly to the Israelis that ensuring the safety and security of journalists and independent media is “a paramount responsibility.”

Meanwhile, Mostefa Souag, acting director-general of Al-Jazeera Media Network, called the strike on the tower a “war crime,” before calling on all media and human rights institutions to denounce it.

The Washington-based National Press Club also questioned whether Israel was seeking to “impair independent and accurate coverage of the conflict,” while the Committee to Protect Journalists, which is headquartered in New York, said Israel should “provide a detailed and documented justification” for the attack.

Download the NBC News app for breaking news and politics

On Sunday, Israel said the office gathered intelligence for attacks against Israel, reiterating that it warned civilians in the building about the strike and gave them enough time to safely evacuate.

However, AP president Pruitt said the news agency had been in the building for 15 years and had “no indication” that Hamas was operating in the building, before calling on the Israeli government to provide evidence.

Smoke rising from what was the building housing our @AP office in #Gaza moments after Israeli jets destroyed it. I and my colleagues evacuated safely, leaving behind our best memories. Thank you for all your wishes. I’m sorry I can’t respond to inquiries now as we are overwhelmed pic.twitter.com/5ccRQggckD

Al Jazeera producer, Safwat al-Kahlout said that people had rushed to evacuate the building, adding that he has not seen anything “suspicious” working in the office for more than 10 years.

“Now, one can understand the feeling of the people whose homes have been destroyed by such kind of air attacks,” he said in a comment to the broadcaster. “It’s really difficult to wake up one day and then you realize that your office is not there with all the career experiences, memories that you’ve had.”