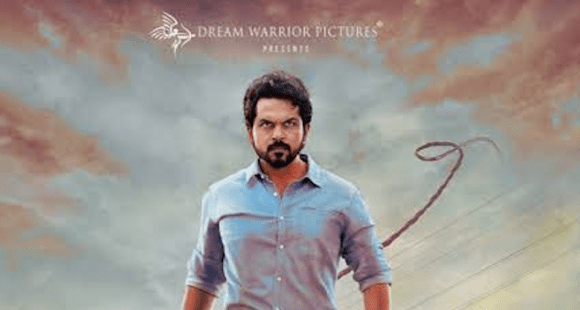 In one of the early moments in ‘Sulthan’, Sethupathi (Napolean) tells his son Vikram aka Sulthan (Karthi) to get married as soon as possible, forgetting that one of his own men is on the death bed. A befuddled Sulthan questions his father’s insensitivity, letting him calmly realize how self-centred he has become as a gangster with a saviour complex over the years. This particular scene defines the soul of ‘Sulthan’, which has released simultaneously in Tamil and Telugu on April 2.

Sethupathi runs an overground mafia-style gang that is into rendering instant justice, and mercilessly hacking the goons of the opposite side. About one hundred ultra-loyal musclemen assist him in his mission. But when a courageous Commissioner takes over, the gang”s days may just be numbered. This is when the conscientious Sulthan takes it upon himself the task of transforming the violent nature of his now-dead father’s yes-men. As destiny would have it, a village in trouble is waiting for him to make them put their abilities to a good purpose.

Karthi strikes the right chord in the role of a morally aware young man for whom bloodbath is not an option. When he has to take on a corporate villain (Nawab Shah) and his puppet (Ramachandra Raju of ‘KGF: Chapter 1′ fame), he becomes an omnipotent masala hero. At the same time, what sets him apart from the run-of-the-mill brave cine hero is that his heart genuinely beats for peace. A parallel exists in Prabhas’ character in ‘Mirchi’ (2013), which came with a somewhat similar theme.

The film does itself a favour by making the audience feel the references to Mahabharata. In keeping with the flavour of the season (thanks to Mahesh Babu’s ‘Maharshi’ et al), the film forks out the idea that farming is an elixir. Just till the land and become a good human being before the first crop is harvested. This is becoming jaded of late but in the context of ‘Sulthan’, we sort of buy into it.

The love track, involving Karthi and Rashmika Mandanna (who has a purpose in life, despite being stalked by the hero), is smartly milked to become a red herring for the rowdy ‘annalu’.

Unlike ‘Mirchi’, ‘Sulthan’ does a lot of humanizing of its goondas. In doing so, it tries to be manipulative. We are told that the macabre rowdies, who are normalized by the hero terming them as ‘annalu’ (brothers), are mere fools. They indeed are fools, but the film tries to push the narrative that they don’t have agency. Because they are Sulthan’s sycophants, they are made to look more helpless than they actually are. Nobody put a gun on their heads to take up gangsterism, right?

But this is a minor complaint. At a time when most films are caricaturizing rowdies, this one at least uses them to deepen the story. How they react to the aroma of blood in the ‘silent’ fight is hilarious. Yogi Babu’s comedy draws laughs. Yuvan Shankar Raja’s BGM and Sathyan Sooryan’s cinematography assist the film ably.

Since rowdyism is rampant in the film, the wise thing would have been to set the story in a bygone era perhaps. Gang wars are rare to come by in 2021 and so the contemporariness of the film is in question. But this is a minor irritant in an otherwise well-made film.

‘Sulthan’, all in all, stands out for toying with emotions like guilt and parental love, and themes like redemption, loyalty and fighting for freedom. A character makes a journey from affection to betrayal. When the hero defeats a muscleman in a one-to-one combat, it is nothing more than a pyrrhic victory to him. There are dramatic moments that this film revels in. Chances are high that the Tamil audience will warm up to it, while the Telugus will have their issues.