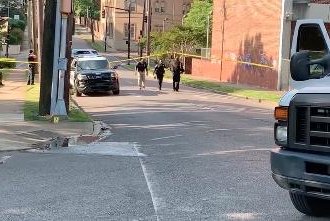 May 17 (UPI) — A homicide suspect was killed and four Alabama police officers were injured during a shooting that erupted as they attempted to execute a search warrant at a Southside Birmingham apartment, authorities said.

Sgt. Rod Mauldin of the Birmingham police department told reporters during a press conference on Sunday that the four officers were transported to a local hospital and were expected to fully recover.

The suspect, whose name has not been released, was shot by police in return fire and was pronounced dead at the scene, Mauldin said.

The shooting began when officers of a tactical team attempted to execute a search warrant at an Southside apartment and were “immediately met with gunfire,” he said, adding that two officers were shot but suffered non-life-threatening injuries while the other two only received graze wounds before fatally shooting the suspect.

“I am extremely grateful that the officers will survive their injuries, and hope the community will continue to support them — and all our officers,” Public Safety Chairman Hunter Williams said in a statement.

Authorities said police were at the location in search of a White man wearing a red shirt and overalls connected to an earlier shooting in which two people were killed.

Mauldin told reporters that authorities had received a call concerning a shooting at about 6:30 a.m. with officers upon arrival discovering a woman suffering from a gunshot wound lying in the roadway and a man unresponsive on the sidewalk. Both were later pronounced dead.

Authorities said the shooting was the result of an altercation over a dog.

The shooting occurred as Birmingham officials and authorities attempt to crack down on gun violence in the city.

Last month, Mayor Randall Woodfin told the public during a press conference that they can not allow a small minority of people “hellbent on destroying themselves and hurting others to rule and dictate the day,” WBRC reported.

Mauldin said the department is deploying additional resources to areas that “may present problems” but that they require the public to tell them of what is occurring in their city before the situation further devolves.

“The biggest thing is we are urging people if you know something is going on, go ahead and call us before these things escalate,” he said.

“This senseless violence must stop,” he said in a statement. “We are continuing to monitor this situation closely and we are wishing all the officers involved a speedy recovery.”