Home Science This is a wonderful time to work on black holes: astrophysicist Parameswaran Ajith

This is a wonderful time to work on black holes: astrophysicist Parameswaran Ajith 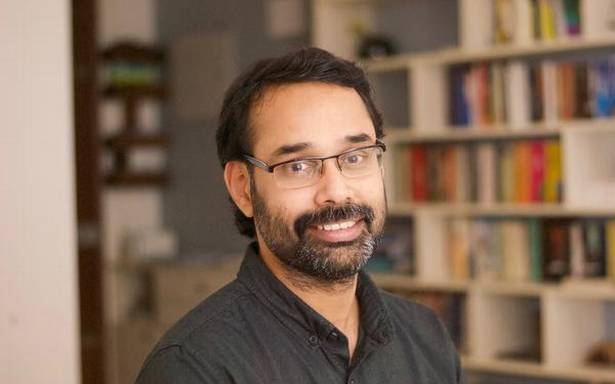 The cosmic bodies have come out of their historical isolation to take centrestage in modern astrophysics, says the recipient of the inaugural young scientist award instituted by The World Academy of Sciences

Parameswaran Ajith, 40, a Bengaluru-based astrophysicist who specialises in the study of detecting gravitational waves, was chosen as the first recipient of The World Academy of Sciences-Chinese Academy of Sciences (TWAS-CAS) Young Scientist award for Frontier Science. He talks about his prize, the excitement of black holes, and about how he chose to become a scientist. Excerpts:

The award citation says you have “…pioneered a method to model the expected gravitational-wave signals from colliding binary black holes.” In layman’s terms, could you explain the principle of this method? Is it the only method for detecting wave signals or is it part of an algorithm of detection?

Detecting weak gravitational-wave signals buried in the detector noise is a quintessential “needle in a haystack” problem. The best way to find such signals is to compare the data with theoretical models of the expected signals, using a technique called “matched filtering”. Indian scientists, led by Sanjeev Dhurandhar, have done pioneering work in adapting this technique to gravitational-wave data analysis.

Calculating these theoretical signal models requires modelling their astrophysical source (for example, two black holes orbiting each other due to their gravity and finally colliding). This involves solving the “Einstein equations” (the equations of Einstein’s theory of gravity, the General Theory of Relativity) which are an extremely difficult set of equations to handle. There are approximation methods to solve these equations analytically. Contributions from Indian scientists such as Bala Iyer were seminal in this. Unfortunately, these methods break down as the black holes come close to each other during their final collision. Luckily, by around 2005, researchers managed to solve this “binary black-hole problem” using large supercomputers.

The “phenomenological method” that we developed provides a simple way of marrying the analytical calculations with supercomputer simulations. This can be used to produce accurate models of the expected gravitational-wave signals. Indeed, this is not the only method for creating such theoretical models — the “effective-one body” framework developed by Alessandra Buonanno and Thibault Damour also offers a theoretically elegant way of achieving the same.

How did you get into astrophysics and black holes?

I grew up in rural Kerala; I don’t think I ever met a scientist before I went to college. However, almost everyone in my family was a teacher. There was also an active village library and a vital presence of people’s science organisations like the Kerala Sasthra Sahitya Parishad. These must have instilled a culture of books. Also, the pressure of the (public) education system was not so large and one could still pursue one’s interests. I ended up in my career through a series of accidents. While I liked physics, I had other interests too. In college, I had almost made up my mind to study cinematography. It didn’t work out, and I ended up joining Mahatma Gandhi University for my master’s. There I had some wonderful teachers and peers who exposed me to the world of academic research. I was supposed to work on a summer project in another field, which didn’t work out. My teacher Prof. Indulekha then recommended my name to Prof. Dhurandhar, a doyen in the field of gravitational wave research in India. After this exposure, I guess I never seriously considered another career option!

Is this the best time to be an astrophysicist, and how do you see your field evolving?

My favourite quote on this is by Caltech’s Rana Adhikari: “When I was a student, my advisors used to tell me that this is the right time to work in this field. I tell this to my students too. But this time, I mean it.” Jokes apart, this is a fantastic time to work in astrophysics. Astronomical observations in the last two decades have uncovered major gaps in our understanding of the universe, such as the presence of the enigmatic “dark energy” that constitutes 70% of the energy budget of the universe. The age-old puzzle of “dark matter” remains unsolved. These are just two examples of the fundamental questions that modern astrophysics seeks to address. A wealth of upcoming observational data and sophisticated computer modelling has the potential to address these. Gravitational-wave observations will play a major role in this enterprise, along with electromagnetic and neutrino observations.

I read that one of your post-doctoral advisers was Nobel laureate Kip Thorne, who made a huge cultural impact as scientific consultant for the movie Interstellar. Have you worked alongside him? What was it like?

Kip Thorne’s research group was a wonderful ecosystem, involving researchers from a variety of expertise and age groups. His group meetings were fun and intellectually stimulating. He would start by writing everyone’s names on the blackboard. My surname is difficult — but never once did he make a mistake! There were all kinds of rumours about “the movie Kip was making,” but he was quite good at keeping it to himself. I remember one of the earlier storylines involved LIGO (Laser Interferometer Gravitational-Wave Observatory) detecting gravitational waves from extra dimensions.

In 2016, the announcement of the detection of gravitational waves was the biggest scientific event of the year. You were among the 1,000-odd scientists who were part of LIGO and contributed to this discovery. How did you come to be associated with LIGO?

The LIGO Scientific Collaboration involves scientists from over 100 institutions and 18 countries. I joined the Collaboration in 2004, when while I was a Ph.D student at Max Planck Institute for Gravitational Physics in Germany. This group built and operated the gravitational-wave detector GEO600 in Hanover. Although this is a small-scale detector (“only” 600 metres long!), this is where many key technologies for advanced LIGO were developed. The first part of my Ph.D thesis was on developing methods to distinguish between real gravitational wave signals and transient noise events that mimic real signals in GEO. Slowly, I branched out to the analysis of LIGO data and to the theoretical work on developing models of expected gravitational-wave signals.

Since the 2016 detection of colliding black holes, several other such mergers have been detected. How has this changed our ideas about black hole formation, or the history of the early universe?

To start with, these observations provided the first direct evidence of binary black hole collisions. They have also uncovered a new population of “heavy” black holes. Over the last few decades, X-ray observations have identified several “small” black holes in our own galaxy — most of them weighing less than 10 times the mass of the Sun. However, most of the black holes detected are much more massive — about 30 to 100 solar masses. This was a big surprise to most astronomers. It is still not entirely clear how nature is producing these heavy black holes.

Most astrophysicists believe they are produced by the ‘death’ (gravitational collapse) of really massive stars. But some cosmologists argue that these could be the much-speculated “primordial black holes” — black holes produced by the collapse of extremely dense regions in the early universe. If the latter is true, it would be a ground-breaking discovery. However, the jury is still out. We need many more observations to decide one way or the other.

The collisions of black holes appear to be cataclysmic events. Are they rare events? Is it even theoretically possible for a merger between two blackholes to be felt strongly, like an earthquake, on earth?

Yes, these cataclysmic events are very rare — the rate of such collisions happening in one galaxy is much less than 1 per million years. So, it is very unlikely that our galaxy has hosted such an event in the whole history of the human race. Even if this happens, its effect is much weaker than that of an earthquake — for example, this could shake your dining table by the size of an atomic nucleus.

Gravitational-wave observatories overcome this difficulty by making extremely precise detectors, which can detect such mergers happening in billions of galaxies in our cosmic neighbourhood.

We also had images of a real black hole broadcast globally in 2019. Do you think these have significantly heightened public interest in black holes? Are they drawing in more students, Ph.Ds, in India for research?

Oh, yes! Black holes have always captured the public imagination; but the breakthroughs by LIGO and the Event Horizon Telescope have definitely enhanced this. So did the recent Nobel prize.

Apart from this general excitement, this is actually a wonderful time to work on black holes. Black holes have come out of their historical isolation, as objects of only mathematical interest, and are now taking centre stage in modern astrophysics. Finally, theoretical calculations, astronomical observations and supercomputer simulations are going hand-in hand in the exploration of black holes. Young students are surprisingly perceptive of these opportunities. In India, the upcoming LIGO-India project has added to this excitement. In fact, the Indian LIGO community is unable to handle all the students who are interested in working with us — we are mentor-limited at this point.

How far has India progressed on LIGO-India, or the local arm of the LIGO interferometer? Has the pandemic impacted it?

LIGO-India is in the construction phase now. The land acquisition has been completed and the required research and development is ongoing in the partner institutions. It is indeed a challenging project, and will take several years to complete. Like everything else, COVID-19 related delays are likely to impact the timeline. However, the project is very fortunate to have the support of LIGO-USA and the international LIGO collaboration. With timely support from funding agencies and goodwill of the Indian scientific community, I am confident that it will be successful.

The pandemic has resulted in the closure of several research institutes and consequently all research work, unless connected to COVID-19 and healthcare, has come to a halt. Has it been the case in your field too?

The pandemic did affect all the major observatory operations. For instance, the third observing run of LIGO and Virgo (another interferometer) had to be prematurely suspended in March 2020. The start of the next observing run will also be postponed. However, the forced isolation and the reduction in administrative responsibilities have given many researchers — especially those who don’t require labs for their work — a chance to focus more on their research. In fact, in areas such as astrophysics, there is a surge in the number of papers written during COVID-19.

In our group, we tried to stick together as much as possible by conducting all academic activities through video conferencing. We were productive and ended up working overtime! However, this is not a sustainable situation. Personal interaction is essential for academic research. I hope that some normalcy will return soon.

How did you decide to set up a lab in India? Are there advantages and disadvantages to working here?

Returning to India was a personal preference. Although I love to travel, I’ve never felt I “belonged” anywhere abroad. Working in India has its disadvantages — the “red-tapism,” for instance. The whole bureaucratic system is designed to promote mediocrity. However, it also presents its share of opportunities. Since we are a developing society with high aspirations, given the right support, one is able to be part of change — sometimes even be part of its driving force.

I was fortunate to find my professional home in a unique institution — the International Centre for Theoretical Sciences at TIFR, Bengaluru. We are a young institution with high aspirations and a keen sense of responsibility with regard to our scientific community and the wider society. My wonderful colleagues — both academic and administrative — make my work enjoyable.