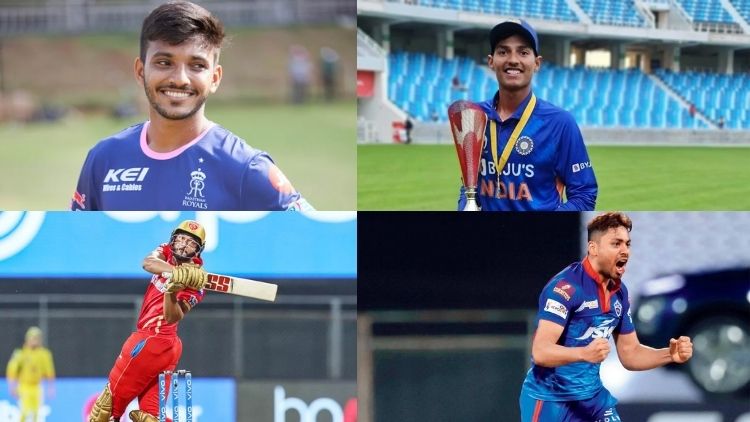 For the last 14 years, the Indian Premier League has given an opportunity to a lot of young talented players in India. Players like Jasprit Bumrah, Hardik Pandya, Ruturaj Gaikwad, Yuzvendra Chahal etc. became famous because they played in the IPL and performed well.

Left-handed Opener from Punjab, Harnoor Singh is currently one of the star batsmen of the India Under 19 team. Harnoor is known to be a very technically correct batsman. His technique is a little bit similar to Sourav Ganguly’s technique. Teams like DC, SRH and PBKS will be keeping an eye on Harnoor.

Another talented player who is part of the Under 19 team is left-arm seamer, Ravi Kumar. Ravi impressed everyone by consistently bowling at a speed of over 135 km/hr. He is a rare commodity in Indian Cricket. Teams like SRH, MI, RR will be looking to get Ravi in their team.

Riyan Parag has previously played for RR in the IPL for the last 3 seasons. He is one of the few Indian players who is a good power-hitter lower down the order. Parag can also bowl useful spin when needed. He has been one of the most consistent players for Assam since his debut. Teams like MI, DC, Ahmedabad, Lucknow will be looking to add Parag to their roster.

Ravisrinivasan Sai Kishore is a tall left-arm spinner from Tamil Nadu. He has been part of the CSK team for the last 2 years but did not get to play any games. With 10 teams this time around, there is a chance of a bidding war for Sai Kishore. Teams like RCB, RR, Lucknow will be looking to get Sai Kishore in their team.

Arzan Nagwaswalla is a talented left-arm seamer from Gujarat. He has been part of the India Test team for the tours of England and South Africa as a traveling reserve. His bowling style is a little similar to legendary left-arm seamer Zaheer Khan. RR, Ahmedabad, KKR are some of the teams which will keep an eye on him.

Ishan Porel has previously been part of the PBKS team although he did not get a game there. Porel is a very accurate right-arm seamer from Bengal. He was part of the India Under 19 team in 2018. Teams like PBKS, KKR, Ahmedabad will be looking to buy Porel.

Mahipal Lomror is a spin bowling all-rounder from Rajasthan. Last season he played a few good knocks for RR. Lomror has been consistently doing well in domestic cricket across formats. RR, MI, RCB will be looking to buy the talented all-rounder.

Prabhsimran Singh is one of the most talented young wicket-keeper batsmen in India. He has played for PBKS before but got limited opportunities. Prabhsimran has been consistently doing well for the Punjab State team as an opener for the last few years. CSK, Ahmedabad, PBKS will be looking to acquire the young keeper-batsman.

Kamlesh Nagarkoti burst onto the scene in the Under 19 World cup of 2018. He impressed everyone by clocking speeds of 150 km/hr with good accuracy. Nagarkoti was bought by KKR but did not play many games because of injury concerns. He recently made a comeback in the Syed Mushtaq Ali Trophy and bowled pretty well. Teams like KKR, SRH, DC will be looking at Nagarkoti.

Rajvardhan Hangargekar is one of the brightest prospects in India’s Under 19 World Cup Squad. Hangargekar is a fast-bowling all-rounder who is a very clean striker of the ball. He had struck the most number of sixes in the Vinoo Mankad Trophy. Teams like MI, DC, SRH will be looking to buy him.

Spin-bowling all-rounder Shahbaz Ahmed has been part of the RCB team for the last 2 years. He has put in crucial performances with bat and ball, helping his team win in the process. With Ravindra Jadeja and Axar Patel retained by their respective franchises, many teams will look to buy a player like Shahbaz. RCB, KKR, PBKS will be some of the teams looking to buy Shahbaz.

Yash Dhull is currently the captain of India’s Under 19 squad. He is a technically sound middle-order batsman from Delhi. Dhull is considered one of the brightest prospects in Indian Cricket. Teams like SRH, KKR, RR will be looking to have Dhull in their team.

Chetan Sakariya is a rare commodity in Indian Cricket. He is a left-arm pacer who can swing the ball early on and has many different variations. Sakariya was very impressive for RR last season which led to an India debut. RR, SRH, Ahmedabad will be looking to add Sakariya to their roster.

Avesh Khan was the 2nd highest wicket-taker in the IPL last season. He was very impressive in the powerplay as well as the death overs. He was also part of India’s squad as a net bowler. Avesh will be targeted by many teams this IPL season. DC, PBKS, RCB are favorites to sign him.

Shahrukh Khan is one of the very few power hitters in Indian Cricket. He put in some game-changing performances for PBKS last season. He has been single-handedly winning games for his state Tamil Nadu as well. Teams like PBKS, CSK, RR will be looking to bid on Shahrukh.