Home General U.S. to Require Negative Covid-19 Test for All Travelers From U.K.

U.S. to Require Negative Covid-19 Test for All Travelers From U.K. 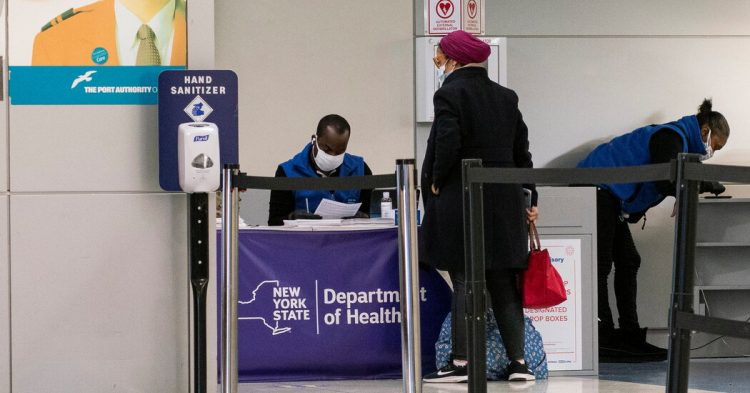 The United States will require all airline passengers arriving from Britain to test negative for the coronavirus within 72 hours of their departure, the Centers for Disease Control and Prevention said on Thursday.

The move comes as a new highly transmissible variant of the virus, which first appeared in Britain, has led countries to seal their borders to travelers from there.

The new rule, which takes effect on Monday, will apply to Americans as well as foreign citizens, and will require passengers to show proof of a negative result on a genetic test, known as a P.C.R., or an antigen test.

“This additional testing requirement will fortify our protection of the American public to improve their health and safety and ensure responsible international travel,” the C.D.C. said in a statement.

Passengers will be required to“provide written documentation of their laboratory test result (in hard copy or electronic) to the airline,” the C.D.C. said, adding that “if a passenger chooses not to take a test, the airline must deny boarding to the passenger.”

The new rules were a reversal for the Trump administration, which initially told American airliners that the government would not require testing for travelers from Britain.

Several of the airlines announced their policies after a demand from Gov. Andrew M. Cuomo of New York that passengers arriving from London to John F. Kennedy International Airport would need to provide documentation of a negative test result.

“We can’t let history repeat itself with this new variant,” Mr. Cuomo had written on Twitter.

Also on Thursday, Gov. Phil Murphy of New Jersey said that passengers arriving at Newark Airport would need negative tests within 72 hours of departure to enter.

The American travel requirements are less draconian than those of other countries in Europe and Asia, which barred all travelers from Britain after the new coronavirus variant emerged. Experts are skeptical that travel bans can stop the spread of the variant. In fact, Dr. Anthony S. Fauci, the top U.S. infectious disease expert, said there was a good chance that the variant was already in the country.

“I don’t think that that kind of a draconian approach is necessary,” he said of a travel ban on “PBS NewsHour.” “I think we should seriously consider the possibility of requiring testing of people before they come from the U.K. here.”

A recent study by British scientists found no evidence that the variant was more deadly than others. But the researchers estimated that it was 56 percent more contagious. The country also announced a ban on travel from South Africa after the health secretary, Matt Hancock, said two people had been discovered with another variant that emerged in the African country. Another variant has also emerged in Nigeria.

The British authorities this week put much of England under newly tightened restrictions on travel and socializing, and warned that schools and universities might soon have to close.